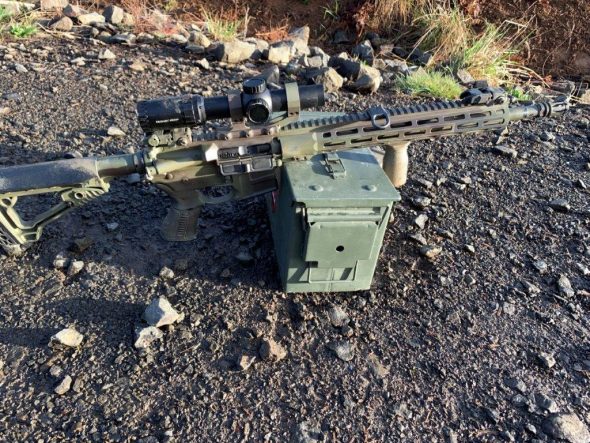 Today we have a guest article from D. S.

He wants to contribute some of his firearm time to TNR, and I would like you to welcome him to the guest writer roster! Without further ado:

With so many AR 15’s on the market, it’s hard to pick with so many options. You have forged vs billet receivers, 4140 vs 4150 vs stainless barrels, chrome lined vs nitrided barrels. The options are endless, and getting the most for your money is important because not everyone can spend $1200 or more on an AR. The magic price point threshold for a top of the line AR seems to be $1000. Any more money you start to wonder if what you bought was actually worth it. Too much less and you start to question how reliable is this rifle. If you are looking for a rifle just to get you into the AR world you have options from Ruger, Smith and Wesson, Palmetto State Armory and even the Savage Patrol model for $600 or less, those are great beginner rifles. However, if you want a little more bang for the buck though, I would give the Savage Recon a good hard look.

Overview of the MSR 15 Recon:

There are actually two options available from Savage. You have the MSR 15 recon and the MSR 15 patrol. The recon model has a nickel boron coated trigger, a custom forged lower receiver, a forged upper receiver, Blackhawk stock and pistol grip, and a free floated MLOK rail with a mid-length gas system. To make it even better, it has a 5r rifled, 223 Wylde chambered, nitrided barrel with an 11 degree target crown. The recon model comes with everything that an AR over $1000 should, but it comes under a 1k price point. If you want a more basic package, look at the patrol model. The patrol model is the basic model, but there isn’t a lot basic about it. The Savage msr 15 patrol comes with everything the recon does, minus the enhanced trigger, it has a smaller rubber recoil pad on the stock, and it comes with a Blackhawk drop in m-lok hand guard instead of the free float rail.

The rifles also comes with flip-up iron sights, and I will be honest, that is the worst thing on the rifle. They suck. The irons that came with the rifle appeared to be different heights as I could not sight them in for elevation…. they felt like they were cheaply made. Just do yourself a favor and get rid of them and get yourself some Magpul irons. The heart of the rifle is the Bolt Carrier Group. There are no manufacturing marks. It is marked “MP” for magnetic particle but not “HPT” for high pressure tested. The gas key is properly staked and it is a full auto bolt carrier group.

Now for the soul of the rifle, the barrel. The 5r rifling theoretically makes the barrel more accurate while also being easier to clean. With traditional rifling you have either 6 lands and grooves or 4… each land and groove being directly opposite of each other. That would deform the bullet a little bit more and that can alter its flight path a little bit by having an inconsistent wear pattern from bullet to bullet. When you are trying to be accurate, consistency is key. With 5 lands and grooves, the groove lines up with a land, which puts less wear on the bullet jacket itself. This causes less jacket deformation and leads to more shot to shot consistency. Furthermore, in a 5r rifled barrel, the lands and grooves are at a different angle than the traditional rifling so they are also be easier to clean out any fouling in the barrel.

The trigger on the recon model is nickel boron coated on the contact points. So what you get is an extremely smooth trigger pull with little to no creep with a nice crisp break. This trigger fits perfectly on this rifle as it can be used to get some very accurate shots down range, but it can be used extremely well up close if that’s more your thing. It is as if Savage took a Mil-Spec trigger and perfected it, it’s crazy what a little TLC can do!

The lower from Savage looks like it is a billet receiver when it is actually a custom forging. Why is this important? Well, it’s not, not really anyways… but it’s a nice touch. Metallurgists agree that a forged piece of aluminum is stronger than a cast or billet piece. Most of the custom lower receivers you see are billet, so you get a cool looking lower but sacrifice some strength. With the Savage lower, you get a unique looking lower very different than your standard “mil-spec” lower… having a rifle that looks different from almost every other rifle out there without sacrificing strength is a pretty neat little detail that Savage got right.

The Savage MSR 15 Recon performs with boring reliability. It shoots when you pull the trigger and the bullet goes right where it is supposed to. I cannot recall the last time I had a malfunction that was the guns fault. I have not kept track of malfunctions but I would bet that I have had less than 3 malfunctions that were the carbine’s fault. I have put approximately 1500-2000 rounds through the gun. The worst thing I have had is a few light primer strikes; I think the primers were a little too hard from Hornady. It eats everything, so a light primer strike on such rare occasion makes me think it’s just an abnormally hard primer. I just shot 200 rounds of Tula ammo the other day and had the barrel smoking and even the hand guard was very warm to touch, and the rifle kept going.

The Savage MSR 15 is also a comfortable rifle to shoot; it’s 6.9 to 7lbs depending on where you look. It’s not heavy but it’s not light. It has a light recoil impulse due to the oversize recoil pad, and the mid length gas system. The stock is good enough, yet I want to change it for a Magpul, but can’t justify it because I gain nothing other than looks. Same goes for the grip, it’s a comfortable grip, yet I want to switch it with a Magpul grip for looks… but I also can not justify switching because it’s good enough as is.

I have been able to shoot 2moa or better ammo from Hornady’s bthp line of ammo, and 3 moa from the m193 loading. The 55gr bthp match ammo from sportsman’s warehouse is $50 for 150 rounds, and the m193 loading is 6.99 for 20 rounds. This accuracy test was done from my super stable setup, so do with this info what you will. I also used a 1-6 primary arms scope.

This is my setup when I do accuracy testing, not the most stable, but it does fine. The scope on my rifle is the primary arms gen 3 1-6 ACSS scope.

There was one flyer on the 55gr hpbt loading from Hornady:

From just the looks of this rifle, it’s just another AR. It has an upper and lower with a nice trigger and a free foot rail, but there is more to it than that. It has a trigger that has been given some TLC. It has a custom forged lower receiver to give it a sleeker look than your typical run of the mill mil spec lower. It has a bolt carrier group that has been properly assembled and made from mil spec parts. It has one of the nicest barrels you can get on an AR and in my opinion the nicest barrel under $1000. All of the little details that Savage got right is what sets this rifle apart from other rifles. You can tell that Savage took their time when designing this rifle to make sure it was the best rifle it could be, and I think they “hit the bullseye” on this one. Pun intended.

The Savage MSR 15 recon has everything you would expect to find in a gun that costs over $1000, but you can find it from around $750 to $900 depending on where you look online. It has an MSRP of $1009 from Savage’s website. This gun is in my opinion the best gun under $1000 that you can buy as of today (April 3rd, 2019.) It just gets over looked so often because it came to the AR market so late in the game. It hasn’t been around as long as Aero Precision, BCM, Sig Sauer, or Daniel Defense, so it is hard to compete with name brand to name brand in the AR world and win. Lets face it, at a certain point, you are paying for a name, not the features of the rifle.

Be sure to check out the Savage MSR Recon if you are in the market for a budget AR with more bite for your dollar.

(Editor: I had to research the Savage for myself… and I was pleasantly surprised by what I found online. Again thanks to D.S. who contributed this weeks review! )

Awards
The Savage MSR line of rifles won the NRA’s Golden bullseye award for the 2018 rifle of the year.