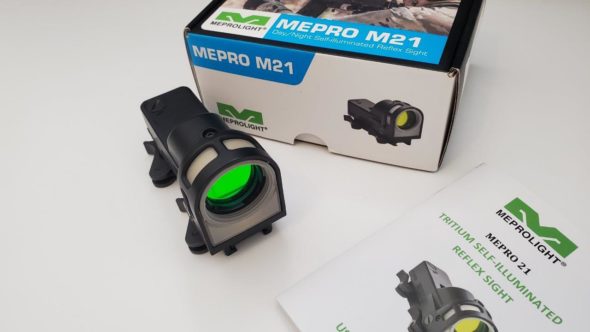 Long lasting, hard use, run over with your truck, battle proven, always on, tritium, extreme conditions, triangle reticle, the IDF, etc. If you or anyone you know has been infected by the above buzzwords please call 1-800-idf-scam to speak with our m21 therapy representatives. They will be happy to assist you.

Don’t call that number. The above is satire. I can’t believe I need to type this but better safe then sorry.

The Meprolight M21 is a tough optic…  but I found multiple ways to cause a malfunction. You may have heard of the washout issue, but there’s oh so much more. Let’s break down my review of the M21:

The M21 feature set looks good, and some of the features are good. The optic is battery free which is still very cool. In good lightning conditions its just as bright and eye catching as any electro optic. The reticle has a bonus of remaining crisp and sharp. Unlike standard red dots, the reticle doesn’t bloom or expand. My model has a triangle reticle that glows nuclear hunter orange in the sun and it remains very sharp even when it gets very bright. In fact I would go so far as to say its my favorite red dot style optic from a reticle perspective.

The optic has a drop off at the base of the projection tunnel that allows water to wash out from the bottom of the optic. Contrast this to some red dots which lack a drain… which can let water pool on the emitter. Rain won’t occluded the m21s emitter. Smart.

After that some other good points are that it’s built like a tank. It’s cast body is thick and appears overbuilt. The mount is fair and low profile with built in steel inserts to ensure the aluminum doesn’t wear away at the pivot points. It feels robust. The click adjustments are obvious and positive. This optic will last a long time. Like really, it’s a tank.

Let’s get the low hanging fruit out of the way: the washout is the biggest issue that most shooters recognize out of the gate. Shooting from dark to light, the reticle can be difficult to find quickly. This is not the right optic to defend the castle with. Weapon lights also make the optic disappear instantly.

That’s not all though. The designers of the M21 had a good idea in that the optic itself has no internal adjustments. The reticle and projection lense of the m21 is fixed in place and all adjustments are done via the mount which physically moves the whole optic up, down, left,  and right.

This should make it very tough right? When you have an external mount you can build things bigger and tougher than the small components of an internally adjusted optic. Right? RIGHT?

Irons out, optic not functional.

I threw it in the mud. The mud caused problems. It caused multiple problems. It occluded the emitter. Immediately out of the mud the dot was gone. The recessed window facing the shooter had mud on it. There is no good way to wipe this off because of how deep it is. The front of the optic could be easily wiped off but this was not going to get the optic back up and running. If you have fat fingers, you will be unable to poke in there and wipe it.

The only solution was to wash the optic with fresh water. I had to remove the optic and dunk it in fresher water to remove the debris and get back online. You just can’t wipe off the emitter or the front lens easily as both are deep in their locations on the optic.

When I returned to shooting groups I noticed my group was drifting left to right. The gun in prior to the mud did not exhibit this behavior. I suspect that the mud silt was in the windage mechanism. The optic has two springs that act on the windage and elevation to remove any play in the adjustments. They simply act as a mechanism to ensure, in this case, that the play in windage and elevation is removed by continuous spring tension.

Walking perfectly left to right after the mud test.

I suspect enough crud migrated into the adjustment mechanism and opposed the spring return. Each shot jerked the optic enough that the spring slop and grit eventually forced the mechanism back to its resting position.

When the optic is clean and the mount oiled, you can easily apply pressure to the optic and move the windage a few minutes with a finger. Like not “oh maybe that’s a minute or so”… No. You can shift it noticeably with finger pressure. Let it go and it returns to zero when clean and oiled. I can see how crud could affect this quite easily.

Let’s contrast this with a Holosun or Aimpoint micro style optic. Mud and sand can’t get in. Pushing on the external surface of the optic will not affect zero. The glass, if occluded can be easily wiped front and back. The emitter cannot get occluded by debris.

Mechanically there is simply less to go wrong from a dirt and mud standpoint. Also at this point the competition is lighter, smaller, and often times cheaper.

It’s large (and heavy) for what it does. Sure nothing I did would have “killed” the optic, but it was simply too easy to cause a “malfunction.”

The m21 will set you back $450. The weight is 13Oz, it washes out, it is not useful with weapon light, and function can be inhibited by debris… its not looking like a good buy. If you want to buy a polarizing filter, there goes another $50 and now you have a Vietnam era OEG. I would rather drop another $100 on a RMR. Which I just did.

So who is this optic for? I can see several roles: turkey hunters would have a reliable shotgun optic with almost nothing to go wrong. However if they are inside a dark blind then maybe not.

3 gun: outdoors and under no shade this optics reticle is fast and precise. No batteries to forget or electronics to fail so that excuse won’t spoil your trip. If your paranoid about electronics, this may be your optic.

Ranch rifle: bingo as above. If hauling this scope around the ranch then you will always have a reticle and reliability just ensure you do some pmr once in a while to remove crud from mount. Also spotlighting deer won’t work so the optic will keep you honest at night.

Shooters who can’t use a red dot due to eye issues: I have heard rumors that these style of optics have far cleaner reticle than those of a typical red dot. Less bloom and no weird grape effect. Try before you buy but the sharp reticle is this optics best feature. It’s very sharp and little to no bloom. I love it.

That said I need to find a home for this optic. If you have a fixed front sight and a pop up rear thus might work for defensive use with co witness and a light… but this is 2022. Even China is making bomb proof red dots with 50k battery life.

If the m21s predecessor has the same failings then I would say pass on that one too.

Training Tips for the AK-47 →
Scroll Up