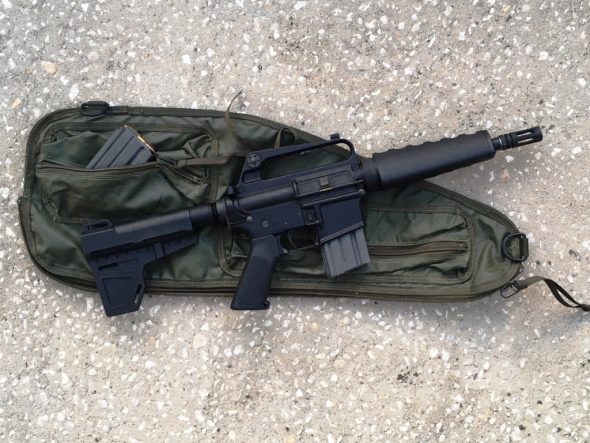 An M16A1 clone and the AR-k as a sidekick

I’ve had the itch to build a compact AR pistol for a while, one that was free of the typical A-frame front sight tower, used simple sights, and very compact.  When I came across the LaFrance M16k, I decided that I would try to clone it as best as I could with off the shelf or easily fabricated parts.  Since it would be semi-auto, I dubbed my project the AR-k.  A specialty parts shopping list is included at the end of this article if you would like to try your own clone.

The LaFrance M16k was a highly customized weapon built in the early 1980s for special operations personnel to use in very tight spaces, such as a vehicle or helicopter, particularly if they were expecting an ambush.  It was built on various M16 uppers using an 8 and 3/8 inch barrel with an integrated front sight built into the carry handle and a unique gas system to allow the short barrel to cycle the action.  The k in the M16k designation is for kurz, German for “short”, and yes, it is very short.  I cannot find any record of an official government agency that ever used the M16k, and the only place I remember seeing it was in the opening shootout of the Naked Gun part 3 movie.  It appears there were at least two different versions, one using a traditional post front sight and the more common version that used a metal tube welded into the carry handle for use as a dual ghost ring front sight.

Detail of the M16k one of a kind gas system, a dead-end gas tube on the bottom connected to another gas tube on top that then extends inside the upper receiver

The M16k portrayed in the opening shootout of the Naked Gun 33 1/3 movie. Yes, that’s OJ Simpson juggling babies in the background

For my semi-auto retro pistol copycat build, I decided on PSA’s 8.5-inch pistol barrel.  The primary reason for this choice was that the PSA barrel uses a standard pistol-length gas system and the barrel is a full 0.750” diameter from the gas block shoulder all the way out to the muzzle threads.  There is no barrel taper or step down after the gas block journal.  I concluded that the specialty gas system on the M16k was much too complicated to copy and my best bet was to use a “dissipator” style arrangement with the functional gas block under the handguards at the now standard pistol location.  I would have to come up with a way to secure the front of the handguards, but the full-diameter barrel would fit nicely with a standard 0.750” handguard cap somewhere between the gas port and the muzzle threads when the time came.  I would worry about the handguard attachment last.  The original M16k had a vortex flash hider, but I decided on a YHM Phantom with closed tines.

The second and most challenging choice was the carry handle sight system.  I explored various options, including a hard look at Rocky Mountain Arm’s Patriot AR pistol that screwed a front sight stub right into the carry handle sight channel, but nothing I found satisfied.  I wanted something that did not require much, or any, modification to the upper receiver.  After rummaging in my parts bin one day, I discovered that a standard plastic Glock rear sight has a trapezoid shape when viewed from the side and that the width of this rear sight almost exactly matched the width of the AR carry handle channel.  A quick chop of a once-forgotten carry handle scope mount and some hot glue yielded a decent front sight contraption that easily attached to a carry handle receiver through the standard scope mount screw in the center of the handle. Conveniently enough, the Glock rear sights are about $5 each and come in various sizes, so I ordered a bunch to experiment with.

For a proof-of-concept prototype, I built up the PSA barrel with a flat top upper, a detachable carry handle for sight experimentation, and a $15 eBay free-float handguard.  If the hacked scope mount Glock sight contraption did not work out, I could go back to the idea of drilling or welding something to the detachable carry handle itself and not sacrifice a retro carry handle upper receiver.  The fully adjustable rear sight also allowed me a great deal of leeway when sighting in. The build looked like the drum fed AR pistol out of the Metal Gear video game, and I took it to an action carbine match to see if it could actually be used as a practical firearm.  I had a lot of fun, got a lot of comments, but most importantly, I finished every course of fire and didn’t place anywhere near last.  I could consistently engage torso and head targets out to 30 yards.  I was slow and deliberate, but the system worked.

The next step was to adapt the prototype sights to an A1 upper receiver.  I used an A2 aperture with a large and small peep sight, but the A1 rear sight housing only has windage adjustment, not elevation, and so I had to fine-tune the front sight height to exactly match the fixed elevation rear sight.  This proved problematic.  I wanted a 25-yard zero, and the shortest Glock rear sight was still too tall when mounted into the chopped down scope mount.  I needed a thinner strip of metal bar to attach the “front sight” to.  Multiple trips to the hardware store and online searching revealed two options, a section of ¼ inch wide key stock and tool steel flat stock. I cut these to length, drilled and tapped them for a center thumbscrew nut, and used JB Weld to attach the Glock sights.

Various front sights tested. The original prototype on the left, blade style in the middle, and ghost rings on the right. Note the different thicknesses of the base metal strips and overall heights in silver sharpie.

I found a combination that worked, but not as well as I wanted it to.  My forty-something eyesight is not good, and the extremely short sight radius of this system makes it so that I can’t ever completely focus on the front sight. The small aperture helped, but the front sight is just too close to my old eyes. I tried orange sight paint and a screwed on real Glock front sight, but it only helped a little. I remembered that the LaFrance also used a dual ghost ring sight which allows one to focus on the target and simply center the two rings together.  So I gave that arrangement a try with cut-up A2 peep apertures and even long machine nuts JB welded to the sight base bar.  In the end, it was the machine nut that worked the best. But let’s be honest, all this thing needs to do is hit at across-the-street distances.  It’s not a target gun, and the crude and close sights worked, even if they were a bit blurry.

Last was the handguard attachment system that I had put off until the end. I was rather worried about it, but my solution surprised me at how simple it was.  If I was going to use one gas block under the handguards for the actual gas system, why not use a second gas block turned around the other direction to attach the handguard cap? The barrel length was long enough to fit both of them, and the full diameter section of the barrel forward of the gas hole meant I could securely mount the second block anywhere I needed it.  My original plan was to tap the gas tube hole for a button head screw, but Brownell’s low profile gas block has a continuous hole from one end to the other.  I just got a long screw and nut from the hardware store and attached the handguard cap to the gas block.  Easy Peasy.  Simply clamp the second gas block at the right location to match the handguard length and it’s done.  The carbine-length A1 handguards needed to be opened up a bit to fit around the gas block where it met the handguard cap, and again where the sling stud nut attaches, but they fit great and are held securely.

I’m really pleased with how it turned out.  My AR-k is a lot closer to the actual LaFrance M16k than I expected I could get, and it functions great.  I can keep all rounds on a 7- inch circle at 25 yards and it is very easily stowed or concealed.  But how practical is it?  Isn’t an AR pistol just a loud (VERY LOUD) range toy, especially one this short?  I didn’t think it was too practical until I saw the Lucky Gunner video below about the terminal effects of rifle rounds versus pistol rounds.  It seems velocity is critical, and bullets do rifle-level wounding when they move at 2200 fps or faster.  So how fast do bullets move out of the AR-k’s 8.5-inch barrel?  My chronograph results for several loads are shown below.  It looks like 55 gr M193 loads will work best.  Although they may look cute, the AR-k, and the LaFrance M16k, are not gimmicks and will work suitably for true combat purposes at short ranges.

Made for each other, the AR-k fits perfectly in a surplus retro M-60 spare barrel bag!