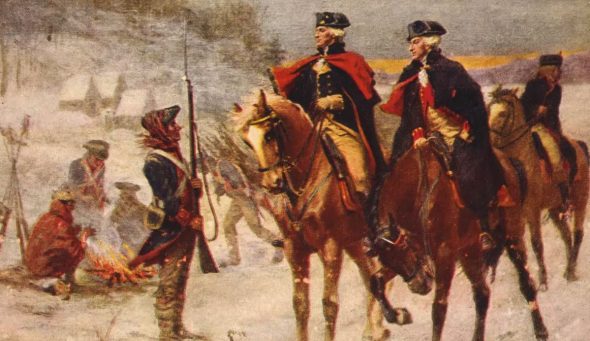 The minutemen of 1775 used rifles almost twice the size of our average ar15, weighed about 10lbs, were smooth-bored and were prepped to be ready at a moment’s notice. So I wanted to do an article, maybe even a series, on my idea of a minuteman rifle/gear setup.

The requirements for the rifle and rifleman are simple, ability to shoot 300 yards, pack around for hours on end, be as reliable as possible and be capable of sub 3 MOA. No optics requirements, use a red dot, fixed power, LPVO, whatever optics you want. While the rifle that I am building/have built is more capable than that, that is my minimum idea for the rifle.

The great thing about being the militia (US Citizens) is that our rifles don’t have to be defined by “Mil-Spec” they can be better. “Mil-Spec” is a quad rail, with a 14.5” M4 profile barrel. Accuracy is about 3-4 MOA or better minimum. We as citizens can do whatever we want. A free-float rail, 16” barrel, 13.9” barrel, 18” barrel, whatever you want. A muzzle brake, any profile barrel… You can spend $100ish on a barrel and get a 3moa barrel or better. $70 more ($170) on Big Daddy Unlimited gets you a sub MOA guarantee barrel.

While I said this rifle needs to be capable of reaching 300 yards, I like to reach that far with some degree of precision. So I prefer a 1-6 scope. This gives me greater ability than just 300 yards, I can reach out to 450 with it and if I had the range, probably even 500. On top of being able to reach out that far, I can observe things at a further distance than with just a red dot. Since this is a minuteman rifle and needs to be dependable, you need a dependable optic. The Sig Tango6T would be one of my first choices as the glass on that is extremely clear, you get a BDC reticle, it’s tough as nails, and it comes with a throw lever. The Vortex Razor is also a great option, although I have no experience with it, it’s reputation is legendary. And I would also recommend a primary arms 1-6 optic. Their reticle is foolproof and one of the most accurate BDC’s I’ve used to this day. They can be had for around $400ish depending on the day you buy it. I don’t know how durable they are, but I hope to change that soon if I can get my hands on one.

Other options- a red dot is still a great choice for 300 yards and in. I can shoot my AK with a red dot out to 300 yards very easily on a 10-inch plate. So a red dot is very capable. I recommend anything Aimpoint, or Eotech, we all know how durable those things are. I also HIGHLY recommend a Holosun 503 series red dot as I abused that thing and it did not lose zero at all. The Sig Romeo 5 seems to be a good option as well, I will be officially testing it here in the next couple months, but from what I have seen from it already, it’s a solid optic.

For those of you who want more magnification to make more precise shots, even though it’s getting into a more specialized role like a DMR vs an everyman’s rifle, it would be a higher magnification optic. A 3-9 would work well, a 4-12 5-25 anything you want, it just needs to meet the criteria of being able to carry the rifle for hours on end. I’m not too familiar with optics like this as all I have are 1-6s but my dad’s rifle is equipped with a 3-9 Leupold VX-R patrol and it’s very lightweight and has great glass for a reasonable price. I can personally recommend that optic for a DMR role or if you just want more magnification.

Why the barrel and not just the whole upper or rifle you may be wondering? The barrel on an AR15 is very easy to change and can change the way your rifle feels and shoots. If your rifle has a barrel that is obnoxiously heavy, or worse, front heavy, might as well change it. With the manufacturing techniques and technology we have nowadays, there is no reason not to go with a lighter barrel. The Hanson profile barrel is my go-to barrel from Ballistic Advantage and this is why. I have the lightweight Hanson profile barrel. I don’t have dimension measurements on it, but it starts as a regular barrel width and tapers down to a pencil barrel. Doing this makes a very lightweight barrel but it’s heavy where you need it, near the chamber. The regular Hanson barrel starts as a heavier barrel at the chamber and tapers down to a thinner barrel at the muzzle as well. Again, it puts the meat where it needs to be and keeps the weight down on the front of the rifle. These barrels are Sub MOA guarantee with match grade ammo. They also come with a gas block with 2 set screws and a pre-drilled hole to pin your gas block in place. The barrel has a corresponding hole drilled as well, all you have to do is line the gas block up, tap in the roll pin, and that gas block is not going to move.

So again, why does the barrel matter specifically? This barrel is accurate, it’s lightweight and well balanced, and it has a bombproof gas block. That combined all together gives what I think is the perfect start to any minuteman rifle. Any barrel that can shoot at least 2 MOA and isn’t a heavy barrel will do though. Buy from a reputable manufacturer and you will be just fine. Rosco barrels, Faxon barrels, Ballistic Advantage, they’re all affordable barrels that have a great cost to performance ratio. I have no experience with Rosco or Faxon barrels, but their reputation is very well respected.

The furniture on your rifle needs to complement the capabilities of your rifle, and you need to tailor that to you. Are you someone with super long arms and need a little bit more length of pull on your rifle? Throw a 7 position Vltor buffer tube on it to get a longer length. Want a longer handguard, put it on. More of a high-speed low drag shooter? Put more of a straight angled grip on your AR instead of a traditional A2 style grip.

Rear sling point on Magpul SL-K. The slot is also a MLOK point. So you could put a QD socket sling point instead.

The biggest thing accessory/furniture wise is the handguard and the stock. Those two pieces of gear can change the balance, overall feel, and felt recoil of the gun. I highly recommend the Aero precision Atlas series of handguards. I have not used the S-One as I like to have the rail on top. So I use an R-One handguard. That handguard mixed with the BA Hanson profile lightweight barrel gives me such an incredibly balanced rifle that my gun just stays still whenever I am aiming it. Another good option is the Midwest Industries combat handguard. I have only used it on shorter length AR15s though. I will admit, while I love both handguards a lot, I prefer the mounting system/barrel nut on the Aero. The barrel nut is longer on the Aero if I’m not mistaken, and the wrench while proprietary, doesn’t slip off the barrel nut and make me bust my knuckles as the Midwest one does. The larger barrel nut means more surface area to interface between the handguard and the barrel nut, which means a more rigid rail in theory. That doesn’t mean I don’t like the Midwest Industries rail though, it is a phenomenal rail! I prefer the looks of it more, it is a little more narrow than the Aero and seems to have more material to it so it seems a little more rigid than the Atlas Rails. I’m also comparing a 15” rail vs a 9” rail. So take that for what it’s worth.

As for the stock, going with anything Magpul is hardly ever wrong. They make great stuff that is affordable and fits any need. Their MOE line is always solid. Their CTR stuff is adjustable and it also has a locking feature to make the stock rock solid. I am a huge fan of the SL-k stock, it looks good and is solid! The MFT stocks seem to be solid, and the Bravo Company stocks are great as well. But the best bang for your buck is anything Magpul in my opinion.

If you want a better than the mil-spec trigger, the ALG ACT trigger is great! It’s about ($60) and you get a 4.5lb or 6lb trigger. It’s polished and super smooth. The trigger pull on it is very little if any creep at all, it’s mainly just a wall as soon as you get on the trigger and then a crisp clean break with little to no over travel on the reset. Of course, any Geissele trigger will be phenomenal also, but that’s about $200 that you’re spending on a trigger. The other trigger I’m most interested in is the LaRue MBT. It’s $87 shipped, and it sounds like it feels very similar to a Geissele trigger. I have no experience with one first hand, but Lothaen does and has done a review on it in the past.  Editor: Lothaen here, the MBT is equivalent to an SSA, roughly. See our comparison here.

If you don’t want to source every single part from multiple shops, then I highly recommend going with a PSA Enhanced LPK. The enhanced trigger is a Mil-spec trigger that has been polished and has a different, slicker/smoother coating on it to make it a smoother trigger pull. PSA always has good deals on complete Lower parts kits, and you can get Magpul furniture with some of them as well! You don’t need an Ambi safety as a Mil-spec safety will do, but I like the Radian Ambi safety, as well as the Radian Charging Handle. I am a firm believer that every rifle should have an Ambi charging handle. It’s just such a nice thing to have and the Radian Raptor has become the industry standard for charging handles anyways.

The Minuteman Rifle is a rifle that needs to be accurate. You and your rifle need the ability to consistently shoot out to 300 yards with little effort. It needs to be a lightweight rifle that you can pack around all day and then hold steady in any shooting position. These rifles are do all builds and there are more than a few means to skin a cat, but a lightweight, do all build will never go out of style.

My Minuteman rifle missing a light