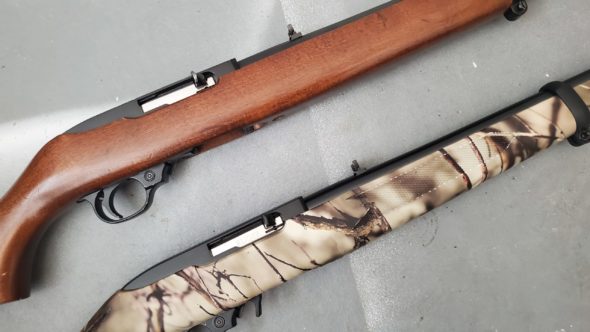 What are the central tenants of a good firearm? I think there are two *basic* tenants. 1) The rifle hits what it’s aimed at. 2) The rifle shoots when you tell it to. So basically it’s accurate and reliable. From this standpoint, a rifle accurate enough to hit your target and to do so reliably every time the trigger is pulled is all you really need. Then there are the details. The numerous details… The gravy. Gravy adds to the flavor. Turkey meat will keep you fed, but the dressing, the gravy, and the cranberries make you happy.

I recently acquired a 2020-2021 production 10/22… functionally it’s what a firearm should be, but is the turkey is missing the gravy?

The 10/22 is, was, and remains a “good” gun. When we look further past the central tenants of a good gun, things don’t seem as simple. The modern 10/22 has cost-cutting measures everywhere. I am a bit disappointed in the changes, as I have an authentic 1980s 10/22 to compare with. I also handled no less than 5 different current production models for comparison at the local shop and purchased one to keep for my disappointment.

The trigger guard and housing is plastic.

The finish is not anodized aluminum, but rather some type of paint or enamel.

On my model: the synthetic stock appears horrendous and the printed camo pattern fades around areas of minute details such as near the diamond pattern of the grips.  White can be seen. Raw nylon? Primer?

The metal vs plastic barrel band. No thank you.

The barrel and sights appear to be exactly the same save for nitride instead of bluing?

The action feels as smooth as my 1980s example. This is nice as my old Ruger has miles and miles on it.

The trigger feels consistent with the 1980s Ruger. It feels different but not enough for me to lean one way or the other.

The mag release is a paddle instead of a button.

The barrel is threaded (on some models).

The bolt carrier has a laser engraved “Ruger” in case you forget which brand you are shooting during clearance drills.

Aftermarket magazines are available from Ruger. Now that Bill’s dead and the powers that be at Ruger put the value of the Second Amendment on the pedestal they released nice factory 15 and 25 round magazines. Big improvement over the old Ram Lines.

It Says “Ruger”. Take the 5 cents off laser engraving production and spend it on 1/125th of an aluminum barrel band.

Why Did You Do Dis:

Because if no one holds a manufacturer accountable then things will continue to cheapen and deteriorate. I grew up with the 10/22 in my hands. I know how it shoots. I know how it feels. The modern 10/22 is a downgrade is fit and finish across the board. I’m not a firearm connoisseur. I buy guns all the time knowing that I will fix issue X Y or Z. It simply hurts to see a degradation in fit and finish on such an iconic rifle.

The primer peeks out in many places under the surface paint.

I personally buy most of the kit you see on this blog, so I can share my opinions freely… The 10/22 is a reliable, albeit poorly finished .22 compared to it’s predecessors. Both the base model and polymer stocked models look as of the attention to detail was an afterthought.

Ruger should reduce the 10/22 lineup to a few base models and roll costs into revamping the quality of the furniture and components. I mean the Ruger ‘Murican flag Vote 2020 edition makes my loins tight and all, but it won’t have the same effect when the plastic has yellowed and the flag has worn off and the barrel band and trigger was eaten by a squirrel during the great boog of 2045.

That was cute Ruger, now make the “Your Vote Didn’t Matter So Take This Badass, Quality, Multi-Generational Edition 10/22.”

Ruger set our 10/22 free. Clean the lineup. Keep a few. Restore the foundation.

Why did you buy this den?

Thanks for asking RockDog. I’ll tell you why. The 10/22 is still a trouble-free rimfire that shoots when you tell it to and hits where it’s aimed. So long as that remains unchanged in that regard, the 10/22 may continue coasting on its timeless, reliable design. Also, it’s $250 ish. So there’s dat.

Not quite. No not quite. I feel for Gen Z as their 10/22 is inferior to the Ruger of yesteryear… But being too late to the game doesn’t mean you can’t roll your own. We’re going to fix it. We’re going to make it better. Next up, Accuracy evaluation, and a few upgrades to give you a rimfire you will be proud to pass down.

← Peep Sight vs Open Sight: A Tale of Two Radii
Review of the Green Mountain 22″ Stainless AR Barrel →
Scroll Up