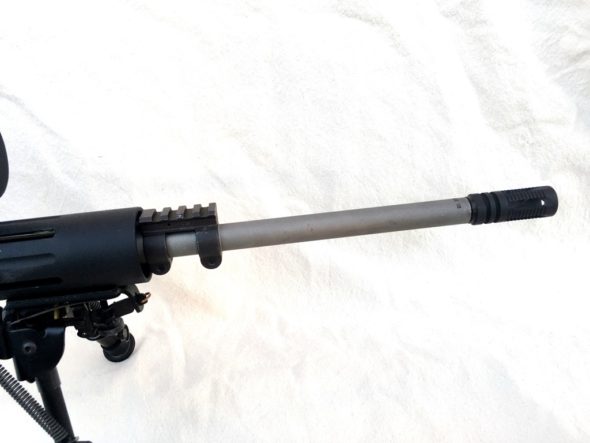 A few months ago I saw this ridiculous looking AR rifle at my local shop.  It had an extremely long stainless free floated barrel and various other outrageous features, like a barrel mounted bipod, a MOE telestock, and a 20x target scope in an old B-Square mount.  I stopped to look at it just to scoff.

WTH is this? Barrel mounted bipod, MOE stock on a “target’ gun, ridiculously long 24” barrel, a mal-adjusted crosshair-point Leupy scope? Oh, it’s a Colt CAR-A3 Elite that has been mistreated.

I was surprised to discover that it was a Colt, and so I went home to do some research on the Colt CAR-A3 HBAR Elite.  I found an article on Loose Rounds and that got me thinking about this model and my lack of a long range precision AR.  I decided to build up a rifle inspired by the CAR-A3 and settled on the 22” stainless barrel from Green Mountain found here.

Green Mountain Rifle Barrel Company has been making OEM rifle barrels for many, many years, and their house brand barrels are a great value.  The barrel I chose is sku GM-M25; a 22 inch, 223 Wylde chamber, 1/8” twist, 416 stainless steel, button rifled barrel with a rifle length gas system, M4 feedramps, and a phosphate extension.  I purchased it directly from their website for about $230 shipped to my door.  The barrel weighs about three pounds and is a mid- to heavy-weight with a 0.875” diameter behind the gas block and 0.720” from the gas block journal to the muzzle .  It’s NOT a heavy barrel like the Colt, and it’s two inches shorter with a threaded muzzle. The finish is a matte stainless except for the polished ring around the gas hole area and it has a recessed target crown at the end of a threaded barrel.  I immediately liked it.

The underside of the barrel is dimpled for two set-screws. since I did not use a set screw gas block, I forgot to measure the distance between them until the gas block was already installed. Sorry!

Rifling was clean and sharp

The phosphate extension looks nice, but it has sharp edges around the feed ramp area, which is normal, but not ideal. I took the sharp edges off.

The phosphate extension after a bit of polishing

I dug in to the parts bin for most of the items needed to put the upper together.  I paired it with a flattop upper receiver, an old DPMS free float handguard (which looks almost identical to the handguard issued by Colt), a YHM clamp-on rail top gasblock, and YHM phantom flash hider. I purchased a new bolt to use with a spare nickel boron carrier.  I mocked all the parts up and everything went together smoothly.  I then prepped the components and assembled them using the best techniques that I know of, discussed previously here.  I then mated the upper to a standard lower with a LaRue MBT trigger and added a SWFA Super Sniper 10x mildot scope and test fired it at a short indoor range.  It functioned great, ran as smooth as butter, and put junk FMJ bullets into one hole at 25 yards.  After initial shooting I discovered that I needed a bit of a cheek riser, so out came the foam padding and duct tape.  It works for now.  The unloaded rifle weighs in at just under 11 pounds. Yeah, it’s a bit of a pig.  But is the weight worth it?

Here is a test fit for all the major parts. It all went together smoothly. Isn’t that a great profile?

That’s a loooong barrel. And it gives a higher muzzle velocity. Is it any good?

First shots and basic sight-in at a short indoor range. FMJ goes into one ragged hole.

To get a glimpse of the accuracy potential, I had to test it at 100 yards. I dug through my dwindling ammo stash and came up with a half dozen loads that I think would be of interest and appropriate for this rifle.  On a sunny 75 degree and breezy day I shot these loads from a bench at 100 yards, with the rifle supported by an adjustable front and fixed rear bag.  I am convinced that 10 round groups are more statistically significant than five-shot groups, so I shot a ten-round group for each load except for the Wolf Gold and Hornady 52 grain, which are 9-shots due to running out of ammo after sighters dialing the scope in.  I shot each group at a moderately rapid pace, ten rounds in under two minutes, Appleseed style.  I did not clean the rifle between groups and I did no other break-in type of procedure.  I did this because I wanted to see how the barrel performed under practical conditions, not just under the absolute best of circumstances.  I also chronographed the loads because the exact muzzle velocity for each ammunition type will allow me to dial in drops for the bullets at greater distance.  All of the ammunition tested are high-accuracy type loads except for the Wolf 55 grain FMJ load.  I shot this load to give a baseline to compare the other loads to.  All of the ammunition loads used here are long established with a well-known performance record.  I did not use any handloads or other unique or otherwise unobtainable ammunition.

A look downrange. Florida in the winter is great.

First accuracy results are promising. Ten round groups tell a better tale of a barrel’s capability than five or three shot groups.

The resulting targets and the table are shown below.  The most important measurement is the Mean Radius, or the average to the center.  This gives a measure of how all the rounds performed as a group, not just the two farthest shots, which is “extreme spread”.  A mean radius of a ten-shot group that consistently gets down close to 0.3” at 100 yards is considered truly “match” grade.

In my opinion, the barrel performed very well.  I am greatly pleased.  I shot the Wolf Gold FMJ ammunition first and thought,” well, that’s pretty good for a FMJ load”, and then after each subsequent group my smile got bigger.  Note how each group is consistent; there are no real “flyers” or rounds that fall far outside the central cluster.  Remember that I shot these rapidly, with about five breaths between each shot, and the barrel got hot to the touch. I would have expected to find a stray shot here or there.  This barrel sends them all to the same location.  But it wasn’t until I got home, laid all of the targets out side by side, and did the statistical analysis that I discovered the most important observation.  The barrel shot ALL of the loads well, nearly identical in mean radius, from the light 52 grain all the way to the heavy 77 grain.  Various manufacturers, various weights, all good.  That’s impressive.  The next step will be to take it out to 300 yards or farther and to develop some pet handloads for the barrel.  I think I could get the mean radius down in the 0.3s.  With the added velocity due to the longer barrel, I would expect to have an effective precision range out to 700 yards or farther with a proper 77 gr SMK load.

I do not know how this Green Mountain barrel build would compare side by side to the Colt CAR-A3 Elite at 500 yards, but for a precision build that won’t choke your wallet, this barrel gives a great value.

← Ruger 10/22 Review 2021: The Cheapening…
Gear for the Hard Times: DIY Water Purification for your Family →
Scroll Up