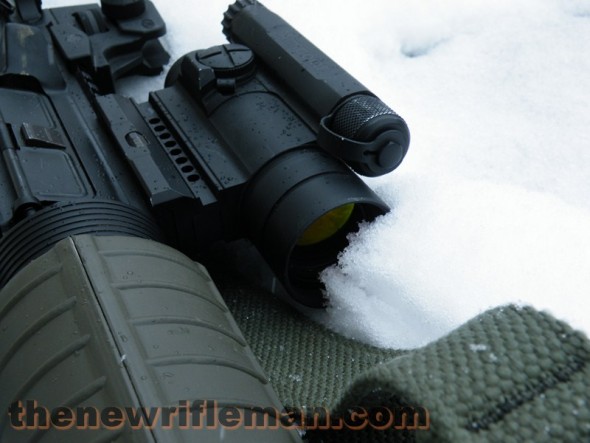 I got the M4 after trading for a Vortex 1-4x variable viper PST. My reasons for trading were weight and bulk related as the Vortex with mount started making my rifle feel like the titanic. I appreciate a rifle that’s on the trimmer side so I decided to try a used high end red dot sight. The Comp M4 is built tough and is really all business: The one piece machined barrel of the optic is made with precision. The mounting system is robust and has some “heavy metal” construction. Weight is: 11.8 oz with the mount.

The only moving component is the dial switch for dot brightness which leads me to my only complaint. The dial has lots of side to side turning movement before you actually click over a new setting. It has yielded no issues as far as reliability, but it is a complaint I have seen elsewhere. Why on a 700 dollar red dot does the only moving part feel loose as a goose? No Idea. So far so good and it has not gotten worse or affected the optics performance. ( Edit: A member at ARFCOM noted that this is engineered to prevent shock directly to the battery switch! Thanks Tomac!)

The 2MOA red dot has been a great shooting aid. The choice to go with a 2MOA dot has allowed me to dial the intensity down to eliminate glare or bloom (present in many bright red dots) and what is left is a very precise 2MOA dot. I owned a Trijicon RMR but the 6MOA dot and the intense bloom held back my ability to acquire the target. The more precise dot of the CompM4 has been a blessing. Three simple holds have allowed me to make hits out to 400 yards with this optic; however using the dot at 500 yards becomes guesswork as to how far above the target you have to hold… but at this distance I can barely see a white man sized steel silhouette anyway. If pushing past 400 yards is your goal I would suggest magnification.

The optic holds its zero well. I have removed and replaced it, bumped it, scraped it, ect and so far no zero change. Nothing has affected its performance. I would like to throw it into concrete and blast it out with dynamite for you guys but I think a few other people have done things like that before so I don’t see the need blow up my optic. If you are thinking about buying a Aimpoint product then you know many people will back up the brands legendary reliability and toughness.

Worthy of the investment?

From a rifleman’s perspective… it depends on your needs but overall YES. It has assisted my shooting out to 400 yards very well. Hits are fairly easy with it at that distance. It is lighter than the previous setup I had equipped on this rifle so there is another bonus. At this price range you are getting into ACOG territory but here the question here is which fits your needs better? Will speed up close and “man sized target” capabilities out to 400
yards suit your needs better than 4x magnification and precision the
ACOG (or variable) provides? Which do you prefer? So far the CompM4 has complimented my modest rifle skills and it is dump truck tough to boot. From here I will obtain some other popular red dot sights to review (including entry level setups). The CompM4 will be used as the comparison standard by which to judge other entries into this field. First two on my list for comparison: Lucid and Vortex.