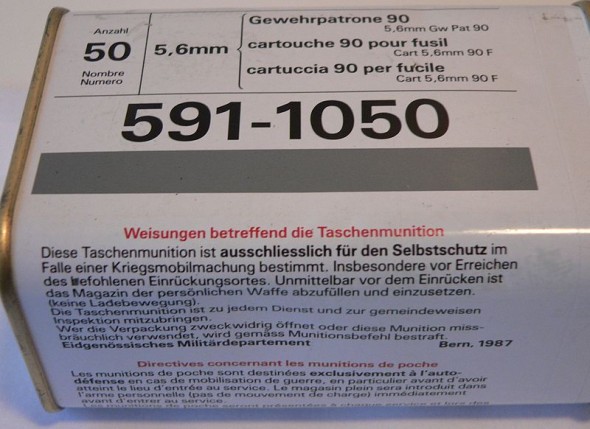 So you stockpiled a lifetime supply of wolf did you? I must say, having some ammo is better than no ammo, but it is important to choose the right stuff.

Let’s face it… Buying ammo these days is about cost. The stuff costs too much for the average gun owner to shoot as often as he or she would like.

But the cost of ammunition is not the determining factor in the ammunition’s performance.

Does Switzerland Make Anything Cheap? No.

The Swiss are riflemen. They value marksmanship and are equipped with well made rifles. Many Swiss citizens take part in target practice (which they prefer to do at 300 meters) and their military ball is good enough to be considered match ammo.

I have looked for GP90… And it is expensive stuff made with typical Swiss quality. Problem is that it absolutely sucks for self-defense.

Take a look at this post from the archives over at www.ar15.com:

That was me.It’s coincidental that this would be mentioned as the matter happened some years ago and was finally closed (and I can therefore discuss it) earlier this year.I had TWO, count them TWO failures to stop involving three armed aggressors in the same incident. In the more grievous of the incidents five shots of GP90 were fired from a 360mm (16″) Sig551 at a range of between 20 and 15 meters. The exact order of the rounds isn’t clear but was believe to be:At 20 meters: A controlled pair with the first round striking the upper left chest, passing through the left lung and exiting the back below the left shoulder blade passing within 2cm of the Pulmonary artery and within 4 of the Aorta. Second round struck approximately 6cm above and to the right of the first passing through non-vital soft tissue and exiting the back of the left shoulder. After these shots the aggressor began to return fire (quite accurately, I might add. But then I am told incoming fire always seems more accurate than outgoing fire).At something between 20 and 15 meters: I squeezed off a perfect miss.At around 15 meters: A (somewhat less) controlled pair with the first round striking first the left forearm, passing through that to enter the left upper pectoral and passing through the lung to exit the left shoulder. The report speculates that this round deflected slightly up after the forearm encounter. (I think someone was just being generous to me here, it wasn’t the best shot). The second round struck the left cheek just below the eye and exited in front of the left ear (breaking the cheekbone and punching out some teeth, but otherwise superficial).The shoulder blade was punched through but, alarmingly after two solid and one slight hit, not broken. Neither were any bones in the left arm.After what I consider to be 2 CoM hits and one near CoM hit along with what should have been a very distracting facial wound, the aggressor showed no signs of distress and happily expended 18 rounds of rather accurate fire in my general direction. I ended up with some ricochet glass in my face. That aggressor was finally felled with 9mm handgun fire from someone else (I can’t remember which loading but will check) while reloading under cover. He sustained 8 wounds in total. I asked about any yaw in any of the rounds, but was never answered.One of the other aggressors had 13 GP90 wounds (including at least one I consider CoM) but crawled from the field of fire and expended his remaining 15 or so rounds of ammunition from cover before expiring several minutes later. (We only knew because he stopped swearing after 10 minutes).Zip on the toxicology except small (“non-significant” in the words of the report) levels of alcohol.I have little doubt that had I even been using M193 the wound cavity from my first controlled pair would have hit the Pulmonary artery and perhaps the Aorta and ended the fight much quicker.Draw your own conclusions.

So the Legendary GP90 has terrible performance? Check.

Anything with a non expanding or fragmenting jacket will be a poor choice for self-defense. Though the GP90 is legendary for accuracy and it goes bang every time… it just goes to show that our beloved black rifle’s little bullet needs to strike a vital component to incapacitate quickly. The mechanism of fragmentation coupled with penetration is a key factor in quickly ending a lethal encounter. The Swiss GP90, by my understanding, has a thicker jacket than traditional match ammo. They view fragmentation as in-humane.

Take a look at the cheapest stuff on the market: WOLF

People stockpile this stuff because they can afford to shoot it or train with it. The projectile is a lead core wrapped in a copper washed soft steel jacket. It might penetrate, but like the Swiss GP90 the FMJ stuff will not fragment or mushroom to aid in terminal effectiveness. I would pick the Swiss stuff over wolf any day of the week because it will cause less throat erosion and will likely be incredibly reliable, but choosing either for self-defense would be a mistake.

The best tool you have in choosing the proper load for your rifle strategem would be the mountains of testing available here on the net. It is hard to train with good ammo. Not a bad time to get into reloading, but many shooters have time or space concerns. Understandable. Work into your budget quality defensive ammo and skip the new handgun or rifle… your time spent at the range with one gun and the right ammo with be far more educational than spreading that small amount of ammo around several guns.