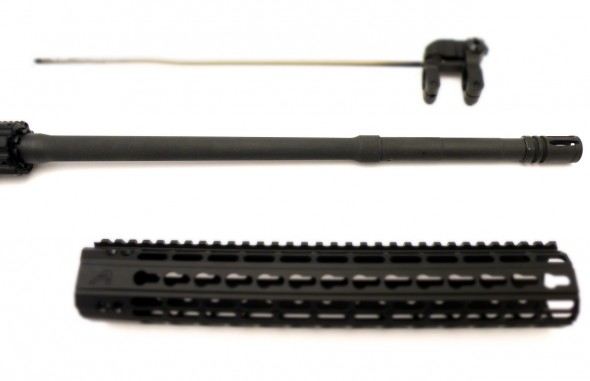 I have some chrono data to share regarding the Criterion hybrid 18 inch barrel. This was my first trip out with my new chronograph, and I am adding it to the list of things I should have purchased sooner.

The Criterion 18″ Hybrid has a .223 Wylde chamber and is chrome lined.

The most promising loading is the 75 grain Hornady with 24gr of Varget. It’s my intention to use this projectile to reduce wind drift and… hopefully… increase my probability of hitting the target.

It matches the drop of the JM-BDC1 reticle near perfectly:

Another point of interest is that the Criterion 18 inch pipe seems to throw down in the velocity department with m193. Look at the data from this collection of velocity tables and you can see that when shooting M193 the Criterion seems to run this a bit faster than a full on 20 inch barrel. Here is the chart.

Federal M193 out of the Criterion blazed out at 3282 fps at 88 degrees. Not a big difference, but an interesting point.  Next time I go out, I will chronograph this same lot of ammo against my 20 inch rifle.

That’s the plan. Now if I could make it to a match… High-Power in September? Hopefully!

← Dead End Products and Trends in the AR15 World: 2015
A Look at Trijicon’s New MRO Red Dot Sight →
Scroll Up