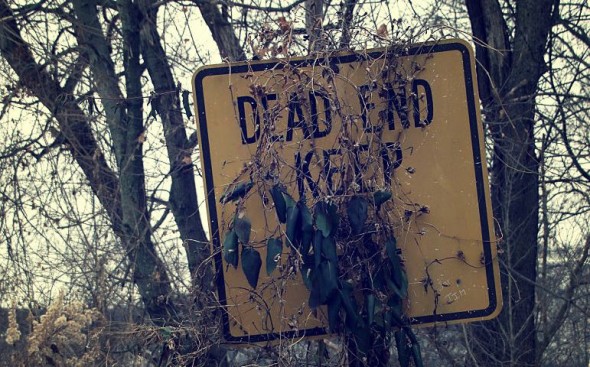 There have been plenty of products, ideas, and changes to the AR15 that have come and gone. I have had the pleasure of witnessing these enhancements rise and fall off the map… some where truly innovative and others were just caught up in the fire of various stages of AR15 community excitement that has ebbed and flowed. Many of these products still exist, but the popularity is in the bust phase, or perhaps the product is so nich that it will never occupy much of the market. Let’s take a look at some of the trends and products that will likely continue to exist, but may be on a dead end street:

The Cav 15 was innovation at its finest. With the explosion of popularity of the platform booming post AWB, the AR15 saw the beginning of the surge in sales that continues to run nearly unabated to this day. The CAV15 was there right at the turning point as a integrated *polymer* lower receiver that didn’t break the bank. At the time, the polymer receiver was largely unheard of outside of the horrendous Bushmaster Carbon 15 product line. The Carbon 15 left a bad taste in the mouths of many shooters, and Cavalry Arms alleviated some of that disdain with a tough, fool-proof receiver.

The system was light, offered a reduced parts count, and has been well received as the most reliable polymer AR15 receiver that has ever existed. To this day, I cannot think of a single polymer receiver that has usurped the Cav15 in durability. Many polymer lower receivers fail near the buffer tube due to recoil forces wreaking havoc on the threaded buffer area. On the Cav-15 that is not an issue due to it being a one piece assembly. One of the biggest factors in why we don’t see much of the CAV-15 today is due to the fallout of Cavalry Arms (now a *new* company called Cavalry Manufacturing) owner Shawn Nelson and his sale of firearms to out of state residents. The boom of cheap aluminum lower receivers didn’t help either.

The CAV-15 is still available from a new dealer known as GWACS Armory who purchased many of the molding assets from the fallout of Cav Arms. If you want a durable, fixed stock, lightweight, polymer AR15, the MKII still exists… though it may never see the popularity it once saw back in “the good old days”. It’s on a dead end road due to the love of telescoping stocks and the amazingly cheap prices metal receivers can be had for these days. I would still recommend it though if you want to build as light as possible.

Another trend in the AR15 that still lingers on is the piston AR15. The trend evolved in an attempt to correct what was “wrong” with the direct impingement system of the AR15 by correcting it with a gas piston that, in turn, adds its own set of unique problems. Many companies produce complete rifles and / or kits to retrofit the existing AR15s to piston operation. Some do it better than others, and several big names offer full blown piston AR’s that will be with us for a long time… but this is a dead end trend.

Ruger’s SR556: Heavier, more expensive, and with it’s own unique problems. At least the bolt stays cool to the touch. I don’t know about you, but I always pull out my bolt and handle it after long strings of fire. Right?

Let’s examine the boom / bust cycle that pistons hit around 2007-2010. Everyone was releasing a piston gun and or retrofit kit, and that culminated with RUGER at the 2010 Shot Show.  These piston guns and systems offer a different flavor of rifle operating system, but are /were heavily advertised to increase system reliability over DI rifles.

The problem with DI AR15s at the time wasn’t the Stoner design itself, rather, it was, has been, and always will be the quality of the manufacturer. In the boom cycle of the AR15 post AWB, we have had COUNTLESS manufacturers building DI guns and many of these manufacturers didn’t know what the heck they were doing. When problems would pop up in the community, suddenly DI guns were “unreliable” and the blame wasn’t laid at the feet of the mom n pop machine shop turned AR15 manufacturer… No, it was Eugene Stoner’s design failure.

DI guns are perfectly reliable systems and many piston conversion kits offered to the AR community offer a variety of unique problems for their owner to solve including, but not limited to: bolt shearing of the gas key / piston rod attachment, carrier tilt, more recoil, and numerous other problems unique to each piston design. Each company that brings out yet another piston system has to refine that system and weed out the problems  that the end users will encounter. Even the HK416 has had teething issues.

So pistons will likely linger on as long as the AR15, but they will never overtake the DI systems more civilians are educated on what makes a AR15 reliable, and manufacturers have, over the years, focused on building a gun to higher specs. Piston guns do not improve upon the original design significantly enough to warrant a switch, but instead offer a different “flavor” of AR15 operating mechanism.

NFA novelties… aaah yes, the products we buy simply to give a finger to “the man” when in reality “the man” has given us the finger by forcing us to buy ridiculous gadgets to “pretend” we have full auto and ultra compact “SBR” weapons. Let’s not sugarcoat it: these products are made to give us the illusion of freedom to create weapon configurations that should be constitutional in the first place.

The Slide Fire stock is one such novelty: the boom occurred around 2011-2012 with numerous YouTube videos showing a new product to give you the feel of full auto without the ultimate satisfaction of having full auto firearm. I get the novelty aspect, and I hope that everyone should understand that this should not be equipped on a defensive firearm… yet I get a feeling, a disturbance in the force if you will, that many proponents of the 2nd Amendment have equipped this on many a SHTF gun along with bottom end red dots and other questionable accessories.

This looks as durable as a Carbon 15.

That said, the other NFA novelty is still strong and with us right now: the “sig” brace. This is a dead end product that may get “interpreted” out of existence by the ATF at some point in the future. Remember, the ATF is notoriously wishy washy. At any time, they can (and will) re-interpret law to extinguish products that attempt to ingeniously comply with the law in ways the government doesn’t like. Products like the pistol or Sig brace and Slide Fire stocks are prime targets for media arm flailing and government busybody interpretation.

The Sig Brace is a fun way to stick it to the man while unabashedly admitting that we are getting stuck by the man.

Thus these are dead end trends. It may take years, but at some point the ATF is going to say enough with the brace… it “skirts” the law by complying perfectly with the law. All we need is a precipitating factor and suddenly these items might be ruled away.

The MOE MLOK line is really one of the only relevant products on the market for poly handguards. Wait a minute. Is that A2 upper relevant?

Talk about a “whoah” moment. There are more companies manufacturing free float handguard systems than there are those that mold polymer handguards. This is a trend that really took off during the AR15 research and development boom that occurred post AWB. While the OEM handguard (and Magpul handguards) are likely to be around for a long time, the development of polymer handguards has all but stopped outside of Magpul and a *few* other players.

The reason for this trend is due to the ease of manufacturing and the cost of injection molding. When a company starts producing AR15’s, it is far easier to fire up the CNC machine they already own, upload the CAD design of a new handguard system, and to start producing free float rails. The dearth of manufacturers today have produced their own free float rails and tubes because it’s easier than investing in injection molding machines and the associated components.

What’s more so to blame, is that good rails are easier to find than ever before. Rails used to cost way more than they do today… dropping $300-$400 was the name of the game for a quality rail in the early years. A full length SIR rail could run $450 dollars! Look how the design philosophy shifted from the early years to modern times: lets compare a very popular rail Circa 2004 to a modern rail from ALG defense. Which one would you guess weighs less, costs less, has more modularity, is easier to manufacture, and doesn’t look all like it was dreamed up by H.R. Giger?

Arms SIR: This was high speed a decade ago.

Thus with the evolution of the modern free float rail, we have very little reason to go back to non-free floated anything. You don’t need free floating, mind you, on a fighting rifle… but when the cost to performance ratio favors the FF rail so much, it’s hard to justify the plastic handguards anymore. Ditto now that open standards have come to give us M-Lok and Key-Mod. Plastic handguards are a dead end street simply due to the costs associated with the injection molding process, and the ability of rifle shops to crank out their own rail systems on CNC mills.

There are many products that have come and gone, and with this list we have barely scratched the surface of the BAD IDEAS the AR15 community has seen over the years. Beowulf X? I shudder. Taken for what they are worth, each of the above products actually gets the job it set out to accomplish done, but they are in danger of becoming irrelevant via market forces or potential legislation. Do you have any other products to mention that should be on the list? Mention it in the comments and I will research it and add it below for about a week after the article is published! I can’t do everyones request, but if there is a particularly bad dead end product that I didn’t mention… let me know!