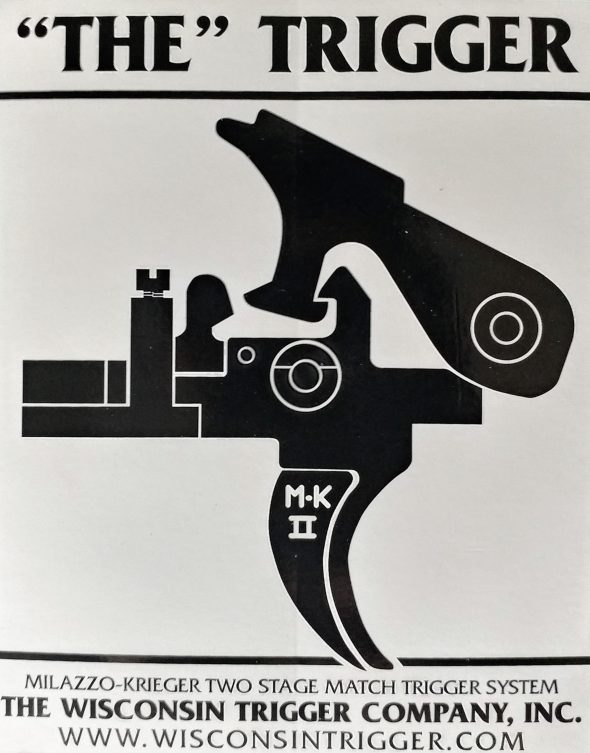 Perhaps you have heard of the quiet return of “The” Trigger and responded without much concern. The trigger market is awash in excellent products right now. With a constant price war between the two heavy hitters in Austin TX and North Wales PA, and the innumerable aftermarket products from Hyper-Fire to Elft Man… we want for nothing in the trigger market. So what’s another trigger going to do in this market? Perhaps the best introduction to the Milazzo-Krieger trigger is best done with a bit of history:

I wasn’t shooting High-Power back in the early 90s, but according to those who were, there was one trigger system above all others that set the standard in the AR15. The MK II was a breakthrough design that paved the way for the modern two stage AR15 trigger. Mr. Milazzo’s patented trigger looks very familiar to today’s offerings… From Larue, to Rock River, to Geiselle, they all utilize the same concept of the disconector as the second, heavier stage.

The Milazzo Krieger trigger was setting National Match records and was adopted by the AMU for use in their own service rifles. At the time it was the biggest advancement the AR15 trigger world had ever seen.  Then suddenly… poof. No more triggers. Mr. Milazzo put the trigger to rest after becoming disenfranchised with the many patent infringements on his groundbreaking design.

Fast foreward to 2015: Ron Albanese retired but wasn’t ready for the RV life. He approached Mr. Milazzo and offered to buy the patent and re-introduce the decades old design back into the competitive AR15 trigger market.

It’s quite obvious that Mr. Albanese wasn’t just an average retired joe. His experience in manufacturing lead him to not only to re-introduce the MKII trigger, but to offer additional iterations and improvements of the design:

Mr. Albanese’s company contacted me through Facebook and wanted to get a review and eval of the MKII-A3 trigger. I am more than happy to evaluate a new product so he sent over for T&E.

The set screw on top of the trigger adjust the second stage, there is another hole below the disconector which allows you to drop in different disconector springs, the package comes with heavy trigger and hammer springs, and overtravel is adjusted from the safety drum. WEW.

The trigger came well packaged in a neat little box. Inside, each component was individually packaged and well oiled. Two foam box liners sandwhich the trigger and protect it during shipping. The trigger comes packaged with enough swag to make Larue and Geissele jealous. Lots of stickers, magnets, decals… and the Coup-De-Grace… a lifetime transferable warranty. Sell your trigger and the new owner continues to reap the benefit of the warranty.

They are evening honoring the original triggers made by Milazzo-Kreiger back in the 90s. Wow.

Installation was a little more dedicated than a standard trigger. After agonizing over which springs to put into the rifle, I did the smart thing and left in the stock springs in place…which gives a clean 4.5lb break. The pins are slightly oversized to ensure that the sear engagement and the pull of the trigger is not affected by variances in the receiver pin holes. It took a few good wacks to insert the pins and is more of a challenge than standard pins. Once the trigger pin was in, the trigger’s bronze bushing coupled cleanly with the trigger pin and rotated like a ball bearing.

Adjusting the second stage to my preference. Once its good, some blue loc tite locks it down.

The hammer installed without issue. I used the old trigger pins as slaves just to ensure alignment, and once together the hammer also rotated into the sear smoothly. I adjusted the 2nd stage to my preference from the exposed set screw, and then adjusted the over-travel through a screw situated in the body of the safety lever. Again, all adjusted to personal preference.

Over-travel adjustment is inside the drum of the safety lever. Once it is set, another allen wrench captures the screw from the side of the safety.

Overtravel locked down. Time to put the safety lever back on.

I started to dry fire and evaluate the trigger side by side to my Geissele SSA. It isn’t quite apples to apples. The G SSA is a non-adjustable two stage trigger set up for 4.5lbs of break and works well as a DMR trigger. The MKII A3 is a national match trigger with many possible adjustment and spring combinations as well as adjustable 2nd stage and adjustable over-travel.

So while they aren’t the “same” I can tell you I have set up my MKII A3 to have a cleaner break with less creep than my SSA. That’s one observation I can make outright. Set up as I did, to my preference, the trigger breaks cleaner than my SSA. They are both smooth triggers, but the MKII A3 wins to the discerning finger. I was concerned when I received this trigger for review that I might not be able to tell a difference between these two high-end triggers, but that was not the case. The MKII is superior to my SSA.

Here is the kicker. As of 8/16/17 the MKII A3 is $30 dollars cheaper than the SSA and comes with tons more adjust-ability. It comes with springs on springs. Heavy springs, medium springs, lightweight springs for the disconector, and two sets of springs for the hammer, and trigger. If each trigger is “user preference” then the MKII lets you have it your way for less money than a SSA. It’s also $80 dollars cheaper than the more comparable Geissele High Speed Natl. Match trigger.

Its hard for me to fathom how many combinations of springs and adjustments I could make to the MK IIA3. I left it stock as is recommended from the factory and was blown away.

So it would be more fair to compare my SSA to a MKII A2, Wisconsin’s tactical trigger. It has less adjustable parts, no over-travel adjustment, a short reset, but still lets you adjust the second stage to user preference. The MKII A2 is about $50 dollars cheaper than my SSA.

Do you see a pattern here? I wish I had more triggers to compare the MKII too. I wish I had a Larue MBT, and a Elftman Tactical trigger unit as well. I don’t, so the best I can do for you guys is to break down the MKII A3 next to a very popular and very well received trigger… but tit for tat it’s not looking too hot for the double action Geissele offerings. We’re not talking “it’s good for the money”… this thing is delivering an ass kicking to a leading national competitor for a better price.

The MKII A3 is cheaper, more adjustable, and appear to be better made.

At this point, I had to ask myself what was I paying extra for with the SSA? The MKII A3 has more machine time to produce, has more features, has more components included, and is a cleaner trigger.

So while it’s not possible to give you a trigger pull through the screen, I believe several of the MKIIs features contribute to its cleaner break: The oversize pins eliminate play from the receiver, the tight fit between the pins and hammer / trigger also reduce play, and the adjustable disconector lets you find the sweet spot for a clean break.

Talking Mr. Albanese helped me understand why the MKII is so much crisper than my G SSA. According to Mr. Albanese, a drop in trigger will never preform to the level of the MKII simply because they have to be built with caution. Due to the various tolerances found in lower receivers (some manufacturers are looser than others), a crisp, zero creep trigger in one lower may be a doubling trigger in another lower. Companies who produce drop in units have to have a bit of safety in their tolerances and thus they can never build a trigger on the knife’s edge of a clean break because it may be completely unsafe in another lower.

The MKII doesn’t suffer from this problem. You can adjust the disconector to give you both safety and a perfect break regardless of who manufactured your lower.

Nothing went wrong. First good sign. The trigger preformed to my expectations of a durable trigger. The crisp break and overtravel was perfect…. As advertised, it has a long reset. On a precision rifle such as my M4E1 + SJ this is of no consequence. It is a precision rig now after all.

I dry fired the trigger probably 500 times before hitting the range and during live fire I cycled 250 rounds through the gun.

I had no issues whatsoever and the trigger broke consistently clean each and every time.

I would like to thank Mr. Albanese for submitting a MKII A3 for review. It’s very difficult to acquire new gear on my budget, so testing something new to the market is a opportunity I will always take. The Wisconsin Trigger Company has entered a highly competitive and crowded market. While the endless argument about Texas triggers Vs Pennsylvania triggers drone on and on, over and over, it would be wise to avoid that popularity contest and instead… focus on a trigger that is manufactured to give you high quality trigger that can be “made your way” to settle that whole “triggers are subjective” argument.

This is a world class, high-end two stage trigger that will receive my unabashed recommendation. I am all about equipping the rifleman with the best gear and have agreed to host a banner for the Wisc. Trigger Co. free of charge to spread the word on this product.

In addition, type in “Brian” in the coupon box at Wis. Trigger Co. and Mr. Albanese has graciously agreed to knock 20% off your trigger. I will not earn commission. This is how much I want you guys to experience this companies product!

“The” Trigger has returned.