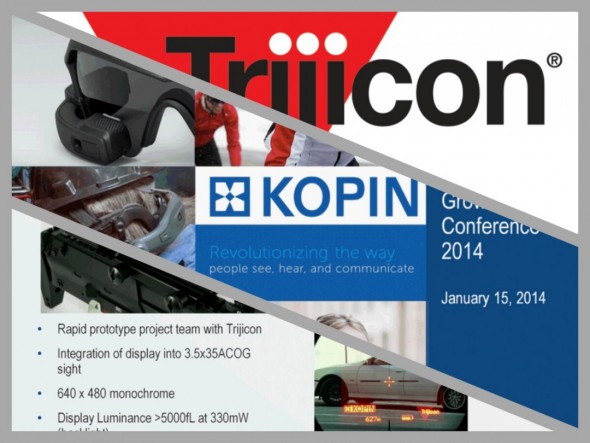 I have acquired a few power points that were previously shown behind closed doors. Kopin Corp and Trijicon have been working on future products that integrate a heads up display with ACOG weapon sights. What makes this technology interesting is the technology is being developed with a very important failsafe: If the electronics go down, your ACOG still functions like an ACOG.

Trijicon and Kopin have partnered to develop several overlay systems that ranges the target, calculates the shot, gives heading, illuminates the reticle, and if the future is to be believed, will eventually identify friend or foe on the battlefield.

One of the more interesting products being developed internally is the above mentioned PATS system. This system integrates directly into the standard daylight optic and offers ballistic computer implementation, laser range finder with daylight visible overlay, all integrated into a compact system that mounts directly in front of an ACOG. What is most important here is that the product allows complete see through from the ACOG. If the electronic device goes down, the ACOG will be fully functional and will function without the need to remove the PATS system.

Kopin believes their technology will integrate with a variety of sighting systems to give the end-user a variety of useful data indicators on the battlefield. The shooter will keep the fixed reticule which will allow the user to use the weapon of the electronics go down, but it looks lost in the clutter. A Visual/ IR sensor fused with an active target reticule which calculates ballistic solutions in real-time… will be doing most of the work. It looks like something out of a Tom Clancy video game.

As you can see, Tracking Point’s system is a totally different beast. This model above offers the ability for the weapon to automatically shoot once it is aligned with a “tagged” target. Without a pass through optical element, it appears you would have to ditch the Tracking Point system if it failed or the batteries ran dry. Look at that chunky butt stock… want to guess where the batteries are? Clearly the two systems have different design goals, but overall I would think the systems from Kopin and Trijicon offer the fail-safe “pass through” visuals that firearms need.

I wish these two companies well In their ventures. As time goes on and more patents end over at Trijicon, they will be in need of new patents and innovation to keep competitors at bay. Here, behind closed doors, we see Trijicon is actively working with other companies to enhance their future products. I look foreword to the future of technology and the rifleman, and something tells me we have yet to scratch the surface of firearms intertwined with technology.

← New Guide: Installing the A2 Rear Sight
Why A Rifleman? →
Scroll Up