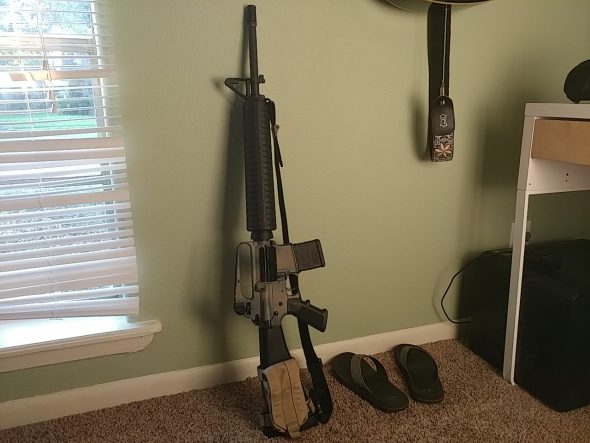 30 Minutes ago, the lights came back on.

I am very lucky. I am not flooded out of house and home like so many unfortunate souls.

Last thursday my county issued a mandatory evacuation and I was knee deep in work. As essential personel I couldn’t pack, leave, or prep until I got home at 8:30 at night.

My amazing wife, with an infant and three other children, packed all the easentials into the van and waited at my parents for my arrival.

I sped home to empty the safe, elevate our “too big to take with us” belongings, and to grab the two confused and scared cats.

Then I met with my wife and at 10:30 PM we sped through Houston and then to Dallas. I decided, as a family, staying put was not worth the risk. Houston and the 2+ ft of rain could have been us. We have an infant and three more. We ditched town.

We watched in horror as the flooding in houston devastated the area. The flooding made the Cat 4 that hit us seem like child’s play. Once we decided it was safe, we packed up and left for home. We had to wait to pick a day and route where we would not be trapped amd cut off.

We made it back on Monday and set up camp in out home. We took a long route around home since our intital route was cut off by flood waters. I cleared our home with my Glock and set up the generator.

I had water stored away, but I had a large life straw bag I brought with me from Dallas so when water pressure was restored I could filter about a gallon at a time. We are still under a boil water advisory right now. The hurricane did kill my towns water supply.

Cooking was done with sterno cans. Crappy and slow to boil water. I will be upgrading my mess kit to a alcohol stove.

Without power, the city was pitch black. Generators mask the sound of people and cars very well. With no fences left, people driving by could see exactly what’s in your backyard.

I clamped a flood light to my generator to illuminate the backyard and broken fence. A simple deterent as no one wants to be obviously lit up as they approach.

Every night my Glock was at my side or on my hip. Reports of a white car and men stealing were present on social media. Assaults and at least one gunshot victim at a gas station occured locally.

My long rifle was also in reach. When things hit, my 16 inch carbine was being wrenched on and was in peices.

My A2 took house duty. It followed me to Dallas (as well as the Straight Jacket) as I decided not to leave all my eggs in one basket.

The A2 was a comfort knowing it has always been reliable and has never failed me. While aimpoints, short guns, and suppressors are really fine peices for home defense, I still found it really practical to have a full rifle to augment my pistol if need be.

The A2 has a full spare parts kit in the stock as well as bits to convert the sling from traditional to two point carry. It had 20 rounds of 75 Grain hornady on call with more magazines handy.

It’s really nice to know I can grab a rifle and take it with a full on spare parts kit in the stock. Full ready drop in bolt, exctractor, ejector, fs adjustment tool, springs, etc. were all at the ready. Everything on board including a spare magazine in the butt pouch.

The lack of a light has since been remedied by Wylie Coyote School of Gunsmithing and will be described in a later post.

The rifle had everything I needed, and anything unlucky enough to be near point blank with the 20 inch barrel and 75 grain bullet would have been in trouble. It is a fine rifle, and having it near was worth its weight in gold.

Past the power and minimal looting my area received, my main job was keeping the clean water flowing, keeping the food going, the generator running, and the house cool.

I got off lucky. I noted several homes and businesses had portions of their building collapse. Roof shingles and interior leaking were commonplace. Several homes in my area are indeed flooded.

Gas lines were hours long. I picked up fuel far out of town to avoid at least the lines for a few days.

My webmaster (whome I stayed with in Dallas) has loaded up a truck with supplies for harder hit areas. If you would like to help offset his cost, please feel free to click on the Brownells banner and do some shopping and buying. The comission from this month will go to his expenses as he hauls food, fuel, toiletries, and water to harder hit locations to my east and north. His gas bill will be quite severe.

Stay safe out there.

Oh, and the A2 still kicks ass!

Returned to work this morning. Several co-workers lost their homes. If you guys can buy gear from my Brownells links I will be helping my co-workers as well. This is crazy.