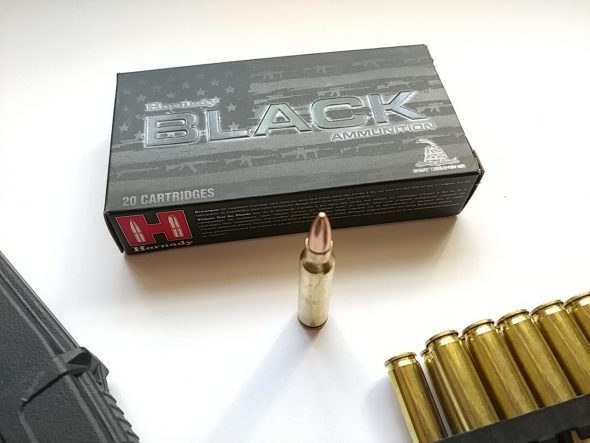 The 62 grain “Black” ammo is a fairly new offering from Hornady which is specifically marketed for black rifles.

I had high hopes that the 62 grain black ammo would be an accurate and cost effective loading since it appears to omit the steel penetrator of the SS109 “green tip” cartridge.

Handsome packaging and shiny brass. If looks could kill…

SS109 and has always sat below ball offerings such as 55 grain M193 in the accuracy dept due to the difficulty in centering the steel penetrator during the manufacturing process. Hopefully omitting the penetrator will give the Hornady 62 grain bullet a boost in accuracy and give shooters a loading that is superior to 55 grain ball in overall ballistics. The ballistic coefficient is .274 (g1).

The test mules for this accuracy evaluation were Teludyne Tech’s Straight Jacket over a Criterion barrel and a Colt HBAR 20 inch barrel.

The test rifles where a Teludyne Tech Straight Jacket and Colt HBAR.

For a accuracy reference, I want readers to know that at least one of the rifles is indeed sub-moa gun. Take note of the Straight Jacket’s accuracy capability with this ten round group shot the same day as this test:

The Hornady 62 grain black averaged out at 2.15 MOA between both rifles. If accuracy is your goal, then perhaps it would be best to pass the 62 grain offering for a different product. The rifle tag is marked STJ (Straight Jacket) but note here that the Straight Jacket group was on the left, and the Colt HBAR grouping on the right.

Neither the Criterion / Straight Jacket or the Colt HBAR could wrangle the 62 grain Black into less than a average of 2.15 MOA between both rifles. This was a bit disappointing to me as I wanted some data to show that the ammo was a low cost and accurate loading. Retailing at around 12 dollars for a box of 20 makes me hesitant to recommend this ammo for accuracy minded applications.

Terminal performance was not evaluated. At this time I will leave that up to the many YouTube channels and resources available. Keep watching for further testing of this product line to include the heavier loadings.

As always, thanks for reading!