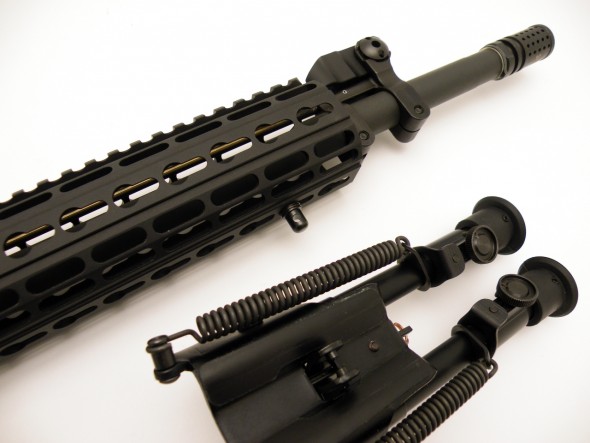 Perusing the gun web last week, I saw a very simple solution to sling attachment on Key-Mod rails. Impact Weapon Components was offering what looked like a key-mod bipod nub. I ordered it right away.

When it arrived, I realized how simple of a solution this was. Other key-mod bipod adapters take up two or three slots on the rail and add vertical bulk. The IWC bipod adapter is a bit different then the other products I have been looking at. It consists of a sling attachment nub that is fed through the key-mod system from the inside of the hand-guard. A rubber gasket insulates it from metal on metal contact. C clips are installed on the outside of the hand-guard which trap the mount in place.

I spent 9.95 on the bipod adapter. The Harris BR Bipod is available for $69 on their website as well.

I like the product. It has a bit of play, but it cannot come out of the slot unless you pry it out, but that means you would have to pull it through the key mod slot… as in damage your rail beyond repair. It was a bit difficult to work with the tiny C clips, but just make sure you have a strong, thin tool to install it. I used some scissors to push the clip into place. A commenter on their website mentioned a dental pick.

A simple solution is often the best solution. Bravo IWC!

← The Trials and Tribulations of Starting a Tactical Program
How Does the DMR Concept Apply to the Prepared Civilian? at Looserounds.com →
Scroll Up