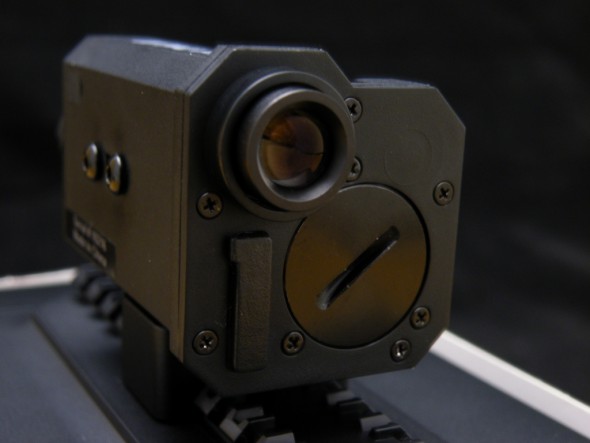 It’s nice to see what you are shooting at. Mounted gun cameras are getting smaller and lighter, but they still don’t suit the platform very well. Its oh-so-hard to see what effect you are having on the target.

The HTN Shot Trak HD is a gun camera first and foremost. What makes it unique is the 5x zoom built into the unit, and here is hoping we can see what we are shooting at! It runs at 1080p as well, so it is a high definition camera true to its name.

The mount can be positioned on three sides for proper orientation. Two small setscrews hold the mount in place.

Out of the box the unit feels a little light. Online images make it appear as though the product is metal, but alas it is a plastic housing. Glocks are plastic too right? How tough is the Shot Trak? I just don’t know yet.

The Shot Trak runs off a CR123 lithium battery and accepts a Micro SD card for footage. There is no way to download the footage from the unit, the Micro SD must be removed and uploaded via a card reader.

The back of the unit features a rocker switch with what amounts to an on and off setting. It’s either recording or its not. Can’t get much simpler. The LED light blinks and turns red to indicate recording.

Not a whole lot to say yet about this device. I am excited to have something that can record long distance shots, but the units plastic constructions and large footprint make me think its going to get whacked on stuff during competitions and I just cant say how durable it will be at this point. It cost me around $120 plus the cost of the Micro SD card. First and foremost, I would like to see a stronger mounting system and a metal body… It just doesn’t inspire confidence at this point.

← Need a Case to Hold Your 12 M16’s? Pelican Has Your Answer.
Picture: The Anatomy of Freedom →
Scroll Up