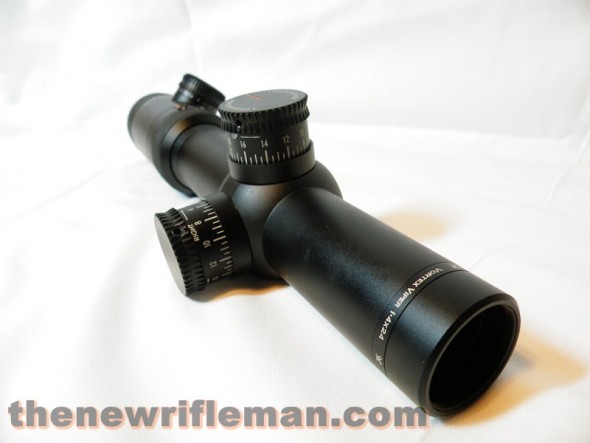 I would like to introduce you to my new glass: The Vortex Viper PST.

I haven’t evaluated the optic yet since I have no mount and thus I haven’t used it on a rifle. Impression: Good glass is nice to have. For the longest time I have wanted an ACOG… but budget and practicality get in the way of that wish. The Vortex cost me 500 bones with no mount. I am looking to spend 150 on a mount so that puts me in the range of 2nd owner ACOG price range. Even then a used ACOG would pose a challenge to find that kind of deal.

So instead of springing for an Trijicon product I decided to try something with more versatility. A 1-4x variable is a versatile tool with a great deal of competition on the market lately. Many manufacturers offer a 1-4x variable and the field shows no signs of slowing down. Each season we see a new 1-4x so the market can only get more competitive and thus give a better product for your dollar. I chose the Vortex Viper PST based on favorable reviews and known optical clarity for the price. I also chose it because it has a MOA reticule instead of a fixed BDC tied to a specific caliber. Sure I would like the easy peasy bullet drop compensation to get quick hits, but simply throwing the round (and other variables) into the LRBC calculator on Vortex’s website will tell me where my bullets will hit in approximation to the MOA stadia lines on my reticule. That is a versatile and very simple solution to BDC.

I recently tried to use the BAC feature of an ACOG and I found that it was much more difficult than I had envisioned. Ergo moving to a 1-4x variable eliminated that issue altogether. While I feel I made the right choice their are some things the VIPER cannot compare to regarding Trijicon products… namely reticule brightness. At the highest settings the red illumination cannot compete with Trijicon’s  fiber optic setup. When moving from bright target to the dark tree line the illumination works well to help the eye not lose track of the reticule, but the red glow is mostly lost on light targets. This isn’t a big deal since the black etched reticule will always show up well against a light target but  when powered on the optic is not Aimpoint, EOTECH, or ACOG bright. Sacrifices.

Those wanting to bridge the gap between red dot and ACOG should examine the market for a suitable 1-4x variable. Remember there are no free lunches. While it does blur the lines a bit between a red dot and an ACOG one must remember that a jack of all trades is a master of none. I still want an ACOG in the future, but for my activities the 1-4x variable gives me more *versatility* with some known sacrifices. On the flip side the Viper PST also brings some strengths to the table that neither the aimpoint or ACOG can replicate and I am excited to evaluate it as another tool in my toolbox.

← What a Peep Does For You.
Something Different… →
Scroll Up