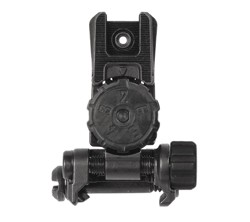 Magpul has introduced a metal BUIS with elevation adjustment known as the MBUS Pro LR. The sight looks good, and I particularly like the scalloped face which will aid in blocking reflection or glint. MSRP is $129, so it’s a direct competitor with other well-known sights such as the MaTech, GG&G, and Knight’s Armament 0-600 rear.

The KAC 0-600 is long-held to be the gold standard of folding, range adjustable buis. It has finer adjustments than the Magpul offering from what i can see, but the Magpul has one trick up its sleeve to offer a bit more utility to the shooter: the aperture can still be switched from a large or small aperture. This is a fantastic feature as a small aperture is near useless at night.

Calibration at this point is unknown.

This is a cutting edge piece of equipment and I hope to get my hands on one soon.

← What If My Range Only Goes to 100 Yards?
Re-Thinking the Modern Rifle: Hosted by LooseRounds.com →
Scroll Up