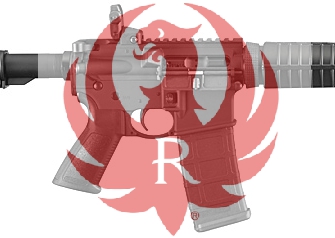 Ruger unveiled their first Direct Impingement AR15 at the end of September, but it looks like another entry into the limitless supply of consumer level AR15s. Breaking the Ruger AR-556 down into its individual components will give us a better understanding of the quality of the weapon. Does it keep quality up and costs down? Does it do anything new? Let’s take a look.

F marked front sight, machined in house at Ruger, and features anti-glare serrations and a QD sling swivel on the bottom. That is a clean looking FSB, and the integration of a QD socket was a nice touch by Ruger. It is pinned on the upper portion of the barrel, so gunsmithing the weapon will be a bit different then your standard AR15.

Hammer forged 4140 steel barrel, in 5.56 NATO with a medium contour and 1/8 twist. Here we have a carbine length barrel forged on Ruger’s hammer forge. I am glad they are making use of their equipment to produce CHF barrels and in an appropriate twist! If the bullet can fit in the magazine, this gun can stabilize it. 55-77 grain ammo will not be a problem.

HPT barrel and bolt, shot peened bolt. A good step. The introductory video makes me believe they HPT each bolt and barrel together before they leave the factory. This is an important step to ensure the barrel and bolt don’t break from an unseen weakness before the gun leaves the factory.

A More Robust Grip. A nice polymer grip with a palm swell and better ergonomics than a stock A2 grip.

The barrel isn’t the better 4150 blend of steel, but this will be inconsequential to most shooters.

The barrel is not chrome lined.

The rest of the rifle is pretty standard for an AR15; a Standard 6 position telescoping stock, skinny carbine hand-guards, and a Ruger (Magpul?) flip up BUIS. Apparently the delta ring and barrel nut are not mil-spec components; that’s something that could get in the way of certain upgrades, namely free float rail systems that clamp to a standard USGI barrel nut. Since we cannot see what that barrel nut looks like, I cannot say for sure. The barrel nut and delta ring are “patent pending”. What? WHY?

Would I Recommend it?

This rifle is geared towards entry level AR owners. If the reports come in that the rifle is reliable then there isn’t much that bothers me with the weapon. For someone scraping the bare bottom of the budget barrel, sure I am sure the Ruger will keep up with whatever the casual shooter can throw at it. If someone you know has to have an entry level AR15 and they wont spend a dime more than $700 then sure, the AR-556 looks like a good choice. Comparing it to the Smith and Wesson M&P Sport, I might be tempted to take the Ruger based on some of the features. For someone who can build their own rifle or has a higher budget, there are better choices on the market.

Edit: corrections made. Rifle is not chrome lined!