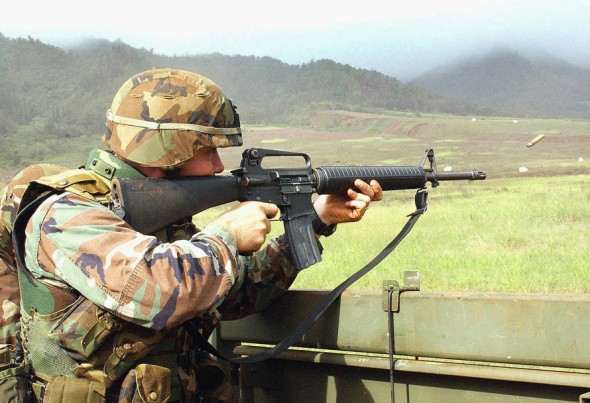 Defensive application of the A2 iron sights needs a bit of discussion. You can read tons of theory on how to adjust irons for an improved battle sight zero, why a dead hold is better than a 6 o’clock hold, and why you should ditch the irons for x, y, or z. etc. While irons have been eclipsed by technology, a well practiced shooter can rock the irons with speed and precision, but it takes more practice.  After working with irons nearly exclusively for the last year, here is what I found that worked well:

Aim over the rear sight, ignoring it completely, at bad breath distances.

If you are grabbing a weapon with irons for home defense… well, irons are fast with the right technique, but you are going to need a light. When used with a bright weapon light, iron sights turn into a great big shadow that’s quickly picked up by the eye. Aiming over (and not using) the rear sight gives you a fast, gross motor movement with a broad aiming reference to use when speed is of the essence.

Peering over the rear sight gives the eye one less thing to align and focus through, and simplifies close range shooting by giving you one reference point (the front sight) for aiming. Aim at or below center of mass, and expect to aim well below the head to get a head-shot with this hold.  A head-shot at these ranges would not be my first choice, being that it’s a smaller target and all. Bullet rise will be significant outside of indoor spaces, so this technique is for speed up close. When the target is outside of indoor spaces, we need to utilize our sights. Let’s take a look at two popular holds.

I have sighted using both the dead hold, and the 6 o’clock. Each has its advantages, but when discussing defensive shooting or a practical shooting competition, the 6 o’clock works better when target size decreases.

These guys are painted white, and at 400 and 500 yards, they become mighty hard to see. Don’t obscure them with a dead hold.

At close ranges, a dead hold vs 6 won’t matter so much, but when you shrink the size of the target to something like a headshot at 100 yards, a dead hold (with a 100 yard zero) would obscure half the head. I prefer to go up 1 MOA on  from a dead hold to turn it into a 6 o’clock, with a 100 or even with a 50/200 yard zero. This obscures less of the target and imagining the front sight as a lower case i where the dot is the point of impact isn’t difficult. My initial zero is mechanically raised 1 MOA with the front sight post. As you increase the distance, it is even more important to keep your hold at a 6 o’clock.

A target at 400 yards and out gets pretty dang small. Obscuring half the target makes it too difficult to engage. Work your setup at known ranges to adjust your elevation drum to keep your shots on a 6 o’clock hold. At extended ranges, I use a 6 o’clock hold at the belt-line of the silhouette so the torso remains un-obscured. Keep in mind that your elevation drum markings are in meters while your range may be in yard so work your holds on paper and mark your sights. The drum markings will get you close enough for hits, so make any minute adjustments needed and mark the drum for your holds at your known ranges.

Mark your elevation drum and windage for a hold that works well for you. Once you have established a repeatable hold, you can end the guesswork. Fine tune your BDC to your loading.

A dead hold is useful for pure precision work, but quite impractical for shooting at man-sized targets at extended distances. Dot the I, in my opinion.

Sight Usage on an As Needed Basis:

One of the wisest things I ever read on weapon sights is that we escalate the use of our sighting system on an as needed basis. For example, if someone was an arm’s length away, we should train to fire upon that target without using sights which emphasizes pure speed. If they are a room away,  we go to the (in the case of the irons) just the front sight post, ignoring the rear sight; we lose a little speed and pick up a bit of precision. At extended ranges, our focus shifts to fully utilizing the sight to ensure a hit on target, sacrificing even more speed for increasing the chance of  a first round hit on target.

This method of escalation lends itself very well to those who are still using iron sights. A rifle with irons is not useless, it just requires more understanding of the system and more directed self-study to find what speeds you up on target. Irons are just another flavor of sighting system, with both waning understanding and popularity.  If you train hard with them, they can serve you well, but don’t talk yourself out of moving forward with more modern sighting systems. Modern sighting systems have many advantages over irons, but fully understanding your iron sights (and their limitations) is never a bad thing.

← Guest Post: BHTC on How to Zero Your AR15 or Kalashnikov
This Weeks Post at The Truth About Guns →
Scroll Up