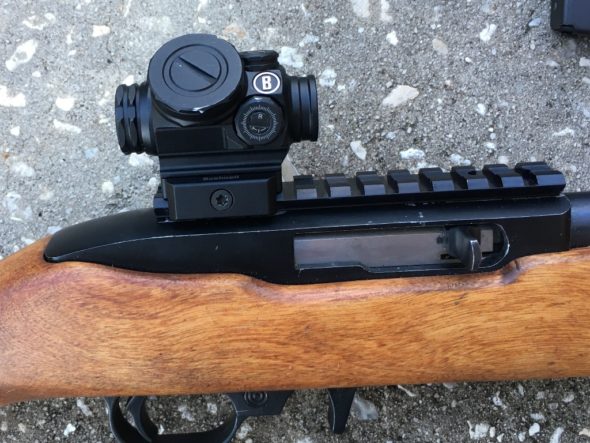 Is the Bushnell Lil P prism sight a serviceable replacement for the traditional mini red dot?  It is my habit to give the bottom line at the top, so yes, the Lil P is replacing my mini red dots.  The Lil P is an extremely small “scope” with a 1x magnification that has an illuminated etched reticle, but the best and the perhaps most overlooked feature is the adjustable diopter that allows you to focus the reticle exactly to your own eyesight. In my opinion and for my use, it’s superior to a red dot. Read on:

The Lil P works great on small packages. I would even say it is ideal for such firearms.

There’s no doubt that the red dot is the fastest, easiest to use, and perhaps the simplest firearm optic… but there are some significant liabilities to red dots.  The first is that when the battery dies, the optic is useless. The aiming point is just gone. Long battery life has become commonplace, but it will die, and fiber optic or other illuminators are gimmicky and not user adjustable for brightness.  Prism scopes like the Lil P have a thick, etched reticle that will be easily seen in daylight as black when the battery is dead or if the illumination is otherwise turned off.  In fact, you don’t need to use the illumination at all if you don’t want to. The second liability to red dots is that poor eyesight, especially astigmatism, makes the red dot difficult to use because it becomes an unfocused blob rather than a crisp point.  Optics like the Lil P that have an adjustable diopter allows the user to precisely focus the reticle to their own eyesight.  It may not be perfect for everyone, but it certainly is improved…  and it’s exactly that time in life as people get older and find that they actually NEED an optic to help them aim their firearm and at that point a blurry red dot becomes less than ideal.  If you have aging eyes or astigmatism, the Lil P may be a very good option for you.  I have both, and so that’s why the Lil P is replacing my red dots.

Illumination is adjusted up or down using the square buttons on the side. the mount has a single, wide clamping bar.

The optic is so small the battery compartment takes up most of the top real estate. Windage and elevation turrets are tiny, not capped, but protected and clearly marked.

Let’s take a direct look at the features of the Lil P.  The most obvious feature is that it’s really small, much smaller than a traditional mini red dot, hence the name.  Lil P I assume is short for Little Prism.  It has an 11mm objective lens, which is about the same size as my pinky fingernail, and weighs 4.1 oz with the factory low mount.  If you are looking for a very small, lightweight sight, I can’t recommend one smaller than this one.  I don’t even know of one smaller.

The next feature important to me is the reticle.  The optic uses a decently large circle with a center aiming point with a vertical bar underneath the center point.  I find that I really like this sight picture.  The outer ring can be used for very fast shots, the center point for precise shots and the vertical bar gives me a reference point for “hold over” when shooting at close targets with an AR-type firearm. The reticle is thick enough to be seen during the daytime without illumination, and the light can be turned on and brightness set at the right level when needed.  Since the reticle has some width to it, rather than just being a pinprick point on a red dot, the Lil P does not need nuclear bright illumination to be seen during a bright sunny day.  There’s enough light reflected to the eye to see the red reticle against a bright background.  Illumination is changed by pressing an up or down button on the side of the unit.  When the maximum brightness is reached the illumination will blink to tell you that it’s at the top.

Proper hold for a center chest target at 10 yards on an AR platform.

High hold sight picture on a torso target at 10 yards for a head shot using an AR. Note that placing the big bottom vertical bar in the center of the target gives the right holdover.

Un-illuminated reticle seen on a bright target at 50 yards.

Fully illuminated reticle on a dark target at 100 yards on a partly sunny Florida day.

[bobross]The Happy little dial to adjust the reticle focus is found on the eyepiece.[/bobross]  Once I had it focused properly, I marked it with a pencil so that I could tell if it had been moved, but the dial is rather tight to turn, so I don’t anticipate it easily getting accidentally moved.  I never knew I needed this feature until I used it on the Primary Arms GLx 2x prism compared to an ACOG which did NOT have it.  Boy, what a difference a sharp reticle makes.  Again, if you have bad eyesight, wear glasses, have astigmatism, or are extremely picky about focused reticles and reducing eye strain, you will like this feature.

This is the dial that adjusts the reticle focus. I mark mine with a pencil after I get it set

The Lil P comes with two separate mounts and uses a proprietary footprint since it is so small.  It will NOT fit in a T1 mount.  There is a low mount and an AR-height mount that sits the optic up high enough to see the reticle over the front sight.  The high mount strikes me as being a bit fragile, but the scope and mounts are made out of aircraft grade billet aluminum and have not shown any signs of weakness in testing.  For my use, which was on AR-types without a front sight base, I wanted the optic to sit just a bit lower, so I used the low mount in conjunction with a UTG half inch 3 slot riser.  This combination fits my needs perfectly and it seems a bit more robust to me than the skeletonized factory AR mount.  Both mounts have a single clamping screw with a Torx head and a moderately wide clamping bar.  The optic comes with all the little tools you need to mount and adjust it.  I zeroed the optic at 50 yards for the AR platforms and 25 yards for the Ruger 10-22.

the AR-height mount sits the optic high enough that the full reticle can just be seen above the fixed front sight.

Best photo I could get of the reticle and the fixed front sight using the AR-height mount.

Height comparison between a Lil P on the AR mount and an Aimpoint on an absolute co-witness mount.

Height comparison between a Lil P on the left with the factory low mount and half inch riser and a mini-red dot with a lower 1/3 mount on the right.

This optic was primarily intended for an AR pistol.  I wanted a small and “smooth” build that lacked a front sight base and was optic only.  The Lil P on the riser mount works very well in that application.  It’s about as small and smooth an optic as I can find. It’s just as fast in action shooting up close as a red dot would be. The day after it was delivered I got back online and ordered two more, one for a trial on a 10-22, and another as a spare.  Again, the Lil P worked well on the 10-22 and will be a permanent replacement to the mini-red dot that I previously used.  I decided to try the third one on a 45 degree offset mount as a backup sight to a TA-01 4x ACOG on a precision rifle build.  An open emitter “reflex” type of mini red dot is typically used in this arrangement.  Due to the short eye relief of the ACOG, I had to mount the prism towards the front of the receiver.  The Lil P was functional in this arrangement, but not ideal in my opinion because at that distance the reticle filled up a large part of the viewing area. It made the viewing tube “tight”.  It would work better mounted at the rear behind a traditional scope, and it might even be small enough to work mounted on top of a standard scope, piggyback-style.  As of this writing, I have moved the third Lil P to the Okay, Boomer lightweight KISS build as the primary optic, and it has worked well in that role.

Can you find the Lil P on the 45 degree mount? It’s in front of the ACOG.

Lil P nestled in front of a primary optic on a 45 degree mount to use as a close quarters sight.

Size comparison of the Lil P on a 45 degree mount. It’s bigger than a reflex dot, but useable.

The only negative I can find in the optic is the very, very short eye relief if it can be called that.  Usually, eye relief is the distance between the rear lens and your eye that allows you to see the full field of view through the scope, the correct eye placement so that you see a sharp, crisp edge around the outer field of view.  In order to get this “full view” in the Lil P I have to stick my face right up on it, requiring that I mount it in the most rearward position on my rifles.  This annoyed me for a bit, but in experimenting with it in use I realized that it wasn’t as important as I first thought.  With a magnified scope, when your eye moves back beyond the eye relief distance, the field of view seen through the scope narrows, and this limits what is seen at the edges.  But with a 1x scope, since there is no magnification, whatever view inside the scope is lost by moving your eye back away from it is seen as normal vision around the outside of the scope.  There is no net loss of view.  I realized that this is exactly what happens with a standard red dot, and it’s not an issue.  Nobody thinks it’s important to push your face up so close to a red dot that you maximize what you can see through the dot tube.  The Lil P is the same.

To get the full “sight picture” the Lil P must sit very close to the face. the charging handle is IN my nose. But since the sight is 1x, this isn’t necessary.

This distance between the scope and my eye is more comfortable, and although I lose a bit of image THROUGH the scope, since it is 1x, I can clearly see the target area AROUND the outside of the scope, just like a red dot.

As of this writing, the Lil P is available at Natchez for $150.  It is nitrogen-purged, immersion waterproof, and shockproof.  When it was first released a few years ago I think it was closer to $300, and I have not seen much promotion of the optic by Bushnell.  There are online rumors that it has been discontinued, and if true, that would be a disappointment.  There is no other optic this small and simple on the market, and I think it is a very good option for those wanting a tiny, battery independent, focusable optic.

Lil P for sale at Natchez