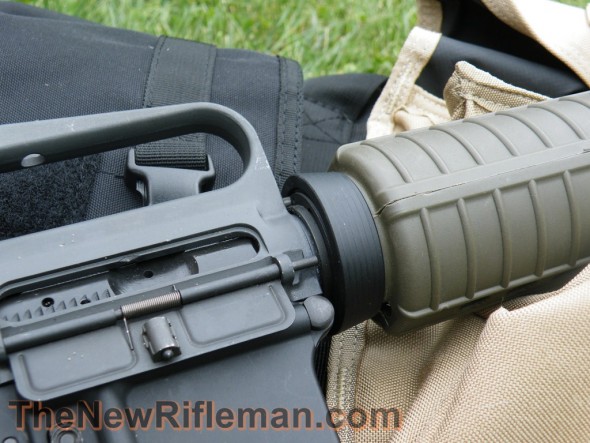 We don’t give the older AR15 platforms much thought any more. Everything is lighter, stronger, and supposedly better. We compensate everything, free float everything, and bolt ergonomic tabs to everything. There are far too many “older” AR15’s sitting in closets unused.

If you see an A2 mentioned on forums it is usually in its military configuration. Box stock, nylon web sling, and it’s admired as a piece of history… not as a modern fighting weapon. It definitely isn’t as flexible in certain roles as a modern M4 style rifle, but to declare it a dead weapon system would be doing no justice to the A2 rifle.

As a piece of military gear the rifle has been since supplanted. The weapon is still fielded, but has been demoted to the back-end of the army, and not the tip of the spear so to speak.

The Civilian Side of Things

As a civilian weapon, it is still an enjoyable platform to shoot. Many admire the nostalgia of the M16A2 and keep it equipped with a nylon web sling and have a bayonet ready to pull out of the stuff drawer. It’s nice to sit back and admire an M16A2 for its military history, but to dismiss it as a weapon system is stupid. Look at the A2 build from a different view: we often decry the carry handle as lacking provisions for mounting the latest optic systems, but how many optic systems does the average AR15 owner have? Not everyone has a Punisher-esque laser cut foam case (or SOCOM Block II smorgasbord) of sighting systems and accessories readily available.

When dealing with an older weapon system, we need to be smart when choosing our accessories to make yourself (and the weapon) a more effective shooter. A vanilla M16A2 is a great weapon to have available, but it can be made more user-friendly and effective with a few choice upgrades.

My intention is not to “pimp my ride”. This article would quickly lose relevancy if I wacked out the A2 in nonsensical gear just for the hell of it. I want to keep it simple and keep the main components of an A2 rifle largely unchanged.

I currently run a Vicker’s Combat Applications Sling on my primary rifle. I chose the same sling for my A2 with a rear sling adapter. The VCAS is a rugged sling and feels incredibly soft for being a nylon based sling. I chose something that allowed quick adjustment of sling length and to allow myself familiarity between my rifles.

The next item in the plan is a compensator. The Battle-Comp seemed like it was a good middle ground device, but is quite expensive. I am keeping my eyes peeled for a good comp that wont break the bank and will fit the project goals well.

I currently have a Spikes Tactical Battle Trigger installed on this weapon. It was an improvement and doesn’t have crunch, but the break is not as clean as I would like. I am looking at a ALG defense ACT trigger. The Battle Trigger isn’t a bad trigger, but somehow the RRA parts kit trigger in my primary rifle was smoother trigger than the much more expensive battle trigger.

A modern defensive rifle should sport a light. There are too many injuries and too many dead family members out there to go shooting at someone you cannot identify. I currently have a GG&G Sling Thing on the A2 with a TLR-1. It is a nice setup since I didn’t have to invest in a costly rail to get a light mounted. Another option would be the Magpul MOE hand-guards, but I chose to keep the stock stuff because I like the A2 profile hand-guards.

The last upgrade, and arguably the most important, would be an optic. This is where the A2 stumbles, but the compact ACOG’s are a great choice for the carry handle and I hope to get one in 2014 to complete this project.

My goal here is to learn the inns and outs of the A2 and pass on what I learn. My primary rifle sports an ACOG. I can’t tell you how much of an advantage the glass gives to you. This is the flip side. What can you do with that spare A2 you keep in the back of the safe? The carry handle may limit my optic options, but that doesn’t worry me. The A2 may be outdated, but it isn’t grandpa’s old 30-30 either. The A2 is a capable rifle, and I am willing to bet that many people wouldn’t be as encumbered by it as they think. The A2 would be a very practical setup for a SHTF gun and, at the very least, a capable loaner weapon. There are many un-loved A2s sitting in the back of the safe. It doesn’t have to be a piece of nostalgia… it can be a fighting weapon.

As I start to accumulate parts for the A2 project, I will update and show readers just how far I can take the A2. Once the project is done, this will be my primary rifle for shooting competitions. It is my intention to run this rifle hard this year and best many other competitors with it.

← FN’s New A4 Rifle and Sourcing 20 inch AR15s
The Best Prices on Trijicon Acogs are at… Amazon? →
Scroll Up