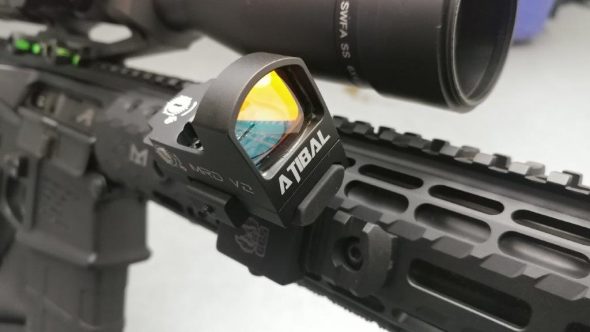 I have a quick red dot review for you guys this week. The Atibal MRD V2 is a mini red dot competing in a crowded market. Tons of products, which one to choose? One thing I appreciate about Atibal is they aren’t afraid to come in from the rear and import models that are superior to the other options on the market. This can net us some really cool gear at the cost of brand momentum. Studying your opponents product and then releasing a superior product can put you behind, especially when you are an underdog in the cut throat optics industry… but being able to produce a better optic is the desired result. Does the MRD V2 do it better?

The Atibal MRD V2 is a super simple optic with a single button to cycle through the 7 brightness settings. No night vision settings are present. The anodizing is dark, smooth, and overal construction looks robust. I have wanted a FastFire for a while now, but looking at the thin hood gives me pause. Ditto for some of Vortex models. At the $200 dollar price point, the Atibal MRD V2 faces plenty of competition. In order to one up, it needs better features. Having a one piece body is a good move, and having a top loading battery tray is another good move. Being tough is another good move. The hood of the MRD V2 is thicc and   STOP DOING THIS. STANDARDS MAN.

Well, where was I? The hood is thick and appears robust. Time (and my review) will tell. You may have seen a video of the MRD V2 facing a rubber mallet attack and faring better than a few Vortex products. That’s a YouTube search for you. Be warned. It’s not for Vortex Fans. I have a link in my video review. Look for the I in the top right corner.

The MRD has a 5 hour auto off, and remembers the last setting you used when you power it back on. 8000 hours battery life on low, 200 on high. It uses a 1632 lithium battery. The battery life could be improved on high, but this is comparable to the 150 hours on high of the Vortex Venom and other similar optics. Lastly, it has audible click adjustments measuring to 1 MOA per click. No nylon locking washers required.

On paper, it looks like a solid entry into the $200 MRD price point.

I took the MRD out on a sunny Sunday afternoon. My test mule was the Palmetto State Armory PSAK and the MRD was mounted to a GG&G side rail mount. Sighting in the 4 MOA dot at 25 yards was easy. 1.5 inches low and go. That was all she needed to ring steel at 100 yards. The dot is crisp and bright.

I plinked from various distances, and the dot didn’t skip a beat. It was quite clear and round. No bloom. Very nice. I decided that needed more excitement… I needed to submerge the optic, so I gave it a bath in a pond. Shaking the rifle cleared the emitter, but occasionally an individual shot would cause water to splash up onto the emitter and it would need to be wiped with a finger or slapped to re-acquire the dot. This is a general problem with open emitter red dots such as the Fast Fire, Venom, RMR, etc. so I don’t put much concern on this fact with the MRD, as its just a characteristic of this type of sight.

On the way back from the dunk, I decided to shock the optic with three throws. I wanted to give it some general abuse and it had no issue dealing with the shock. Once settled in at 100, it continued to ring steel.

The MRD V2 is a basic MRDS suitable for a knock around rifle. It’s entry level price point keeps it within reach for most shooters on a budget. The dot had no drama and nothing stood out as a glaring issue. It could run for a bit longer on the battery, but its peers run for nearly the same amount of time so at this price point your not going to find an optic with 50k battery life. I appreciate not having to deal with locking screws. These locking mechanisms seem to shift your zero OH SO SUBTLY once tightened down, so the fact that the MRD does not need such mechanisms is yet another feather in its hat. If your going to be budget, go ahead and at least be tough. The MRD V2 is a boy named Sue. One tough SOB. Check it out here.