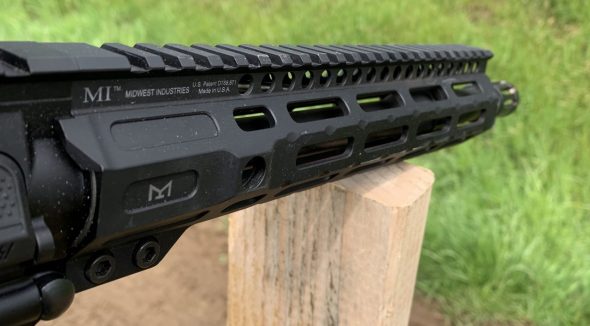 That’s right. This is an over-review. Damien has given us a snapshot review of a variety of MI products in one post. Without further ado:

Midwest Industries is very well known throughout the gun community, and for very good reason. They make some quality products at a very affordable price compared to the industry leaders such as Geissele and others. We are going to look at a few of their products and give you a snapshot review of several product categories. How well does Midwest Industries fare as far as mid-level accessories? For this review, they sent me a QD scope mount and a set of their Combat Iron Sights. I purchased a 9.5” handguard and their MRO QD Mount with my own cash money. Let’s take a look:

T marks on every other space. Most likely will never use it, but it’s a great thing to have. Needs to be on every rail!

Let’s start with the MI Combat Handguard as I feel like affordable handguards are one of the best upgrades you can give your rifle. The Combat Handguard is a smooth, sleek, and cool looking handguard. I appreciate the no-frills approach to the design. There are “T” Markings on every other rail section that runs the full length of the rail at the 12 o’clock position, and MLOK slots all the way around. You also have 2 QD sling slots at the beginning of the handguard. The rail comes standard with a small section of picatinny rail for you to attach anywhere on the MLOK slots, a nice addition. There are little dimples milled into the rail between the MLOK slots and I think it breaks the look of it up enough to make the rail very aesthetically pleasing. The handguard is definitely a slim profile and allows for people even with small hands to very easily grip the rifle. The handguard is also very lightweight coming in at 8.3 ounces. My AR pistol feels very balanced or almost a little heavy in the rear. If you are wanting to lighten up your rifle, this would be a great place to start. The handguard is made from 6061 aluminum, and the barrel nut and torque plate are made from 4140 heat-treated steel.

The small 1.5” outer diameter of the handguard allows me with size large hands in gloves, can get a full grip very easily.

All in all, this is one of my go-to handguards and I would have no problem putting this on any of my rifles. It may not be perfect, but for the price, I am extremely happy with this handguard!

Let’s talk about the MI Combat Iron sights… I’m a younger shooter, so I am new school and know that red dots and LPVOs are the way to go… so for me, iron sights are an afterthought. That being said, I know that iron sights are important, and having a good set is invaluable to a rifle that you may have to depend on one day. The Midwest Industries Combat Iron Sights are a low profile steel sight set. They are very slick looking and appear very durable. Some irons such as the Magpul Pro’s have two aperture sizes… a large aperture for close/low light shooting, and a small one for more precise shooting at distance. The iron sights from Midwest industries have an aperture size in-between a small and a large aperture. This still allows you to maintain some accuracy at distance while being large enough to quickly find your target through the sights up close or in low light. These sights are very lightweight coming in at 1.4 and 1.2 ounces for the rear and front sight. When they are folded down, the rear sight will very easily fit under any scope you put in your rifle. The base of the sights is made from 6061 aluminum and the actual sight post that you flip up is made from “ordnance” grade steel according to the website, so these sights will be very durable!

The low profile sights sit very low and out of sight when you don’t need them.

A small thing to note for these sights. I don’t know if it was just my eyes (my guess) or if there is some reason for it. When I had the irons on my AR pistol at first, I had them about the distance of a fixed iron sight carbine length AR or closer, and I could not use the sights. My eyes would not focus on them properly and I just couldn’t see. Don’t know if anyone else will have the same experience or not, but just wanted to throw it out there. (editor: the closer the front sight is to the shooter, the more difficult it is to focus on. The larger the aperture the less depth of field as well. It’s best practice to extend your irons as far apart as possible. Sight Radius! Some things never change.)

Initial Group with Tango6T on Midwest mount. The low shot was pulled hard.

First group with MRO after sighting in with new ammo

I would consider the Midwest industries QD mounts to be one of the leaders in the industry, especially for the money. They are extremely popular for a reason. I feel these mounts are what people think of when they hear “Midwest Industries.” The MRO Mount is very light at only 2 ounces with the 30 mm scope mount weighing in at 8.4 ounces. Both mounts have been good to me once tightened properly. The best thing about the MI QD mounts is the ability to remove them from your rifle and put them back without losing zero. The Midwest Industries mounts have exceeded my expectations for that! I have removed my optics and experienced little to no shift in POA/POI. Unfortunately, the pictures I have for the MRO mount don’t do it justice, and I am absolutely going to throw excuses out because of it. When I got the pictures recently, I wasn’t in the most friendly conditions for target shooting. I was in a hurry, the sun was shining DIRECTLY ON MY FACE, it was super dusty and I couldn’t see the target very well. I managed to get a few decent groups at 50 yards with my pistol while I was sighting in with my new lot of Barnaul steel cased ammo, and then when I did the group for the test, I shot like crap. You get what you get. There was little to no shift, I just had two fliers, one high and one low. Otherwise, the group stayed in the same spot. As for the scope mount, shooting groups were a little easier with a 6 power scope. In the first picture, there are 6 holes, I moved hard on the first shot for whatever reason and dropped it bad. Don’t count that. As a matter of fact, in the comparison picture, I cover it with the rifle so you don’t see it. The group stayed in the same spot. I have removed the scope many times and successfully shot the 300 yards 10” steel after mounting it again and again. It definitely retains zero with no drama.

Group after removing and reinstalling the MRO. No shift in the group. Just bad shooting on my part

Covered the low shot with clever placement of the rifle. Group did not move.

I do have one complaint though. In my experience with both mounting systems, if the tension wasn’t set properly, it would slide on the pic rail with what little play there is. I have the mount and the receiver marked with a sharpie. After a range session, I looked at the mount and the marks were not lined up. I tightened the screw one turn which felt like it was too tight and clamped it down. It hasn’t moved since. I am afraid of warping my rail and didn’t want to tighten it too tight as the instructions just say to not force it to close. It takes a considerable amount of pressure to close it, but one move back to the prior setting and it wants to move. I’m guessing you have to have it just a LITTLE tighter than you think to keep it mounted properly. Despite being very tight, the lever operation is still very smooth. Using the clamping system is pretty straightforward. You push the safety tab and pull the lever to release it, and to clamp it down, you just push the lever closed. Manipulation of this can be done with one hand with a decent amount of hand strength. When you want to take off the scope mount, however, I have found it to be easier to release the front lever first, then the back lever. Otherwise, the back lever likes to get in the way of releasing the front lever.

Fit and finish on the mounts is superb. They look like they are an anodized black and it is very smooth and durable. They match up very well with the rest of the rifle.

I have not been disappointed with any of the Midwest industries products I have. Once I tightened the mounts properly, they became rock solid. The handguard feels great in your hands, and I think it is a good looking handguard. I would prefer the barrel nut to have a little bit more material to bite on to when I’m tightening it so I don’t slip and bust more knuckles, but I’ll live. The irons are of high quality, lay flat, and simplify AR15 iron deployment… no more flipping apertures for different lighting conditions. The quality of all of their products and return to zero ability from the optic mounts are second to none and I will be buying more in the future. I Highly recommend Midwest Industries for upgrades that offer great performance for the buck.

Editor: TNR and our authors do not and have never had a financial relationship whatsoever with Midwest Industries. I would like to thank Midwest Industries for the T&E and if you are interested check them out at their website or at Brownells.