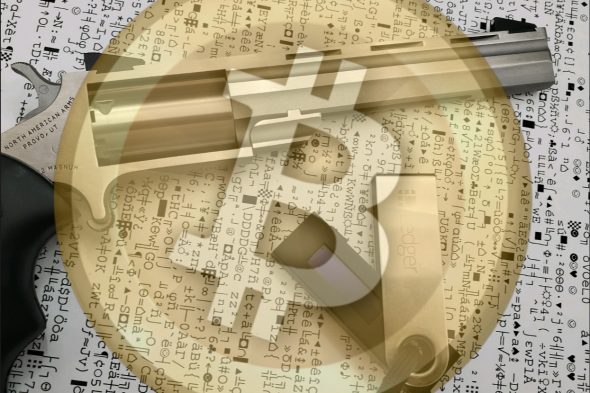 I just talked with an independent gun shop and was quite alarmed by what I heard. He relayed to me that only one payment processor would work with him to accept credit cards. Make no mistake, gun sellers are running out of time and will continue to be demonized by the tolerant left. They will silence us on all platforms, including financial. It’s only a matter of time until one of the big CC companies starts to deny business to firearms retailers. It’s inevitable. Eventually, your gun shop may say that their payment processor (based in California) canceled their account. Cash only. I can tolerate that locally. I am happy to spend anonymously, but that has downstream consequences…

That means we have to go back 30 years to ordering by mail with personal checks and money orders. In the age of E-Comerce… can you imagine the tragedy of all those shops and accessory businesses going out of business because their monetary velocity suddenly slowed to a crawl? The convenience of the internet and the ability to find what we need easily is part of the explosive growth of the firearm industry. Losing such an important component of 21st-century commerce will be yet another nail in the coffin.

Our ability to spend freely will be cut off… yet there is another way.

I urge all gun owners to begin to understand cryptocurrency.

Gun owners are sometimes technological curmudgeons. Aimpoints were a bad word and iron sights ruled the minds of shooters for years. Technology is yucky. Yet, it’s vital we understand it to combat what’s coming. To spend your money freely without permissions a key component of crypto. Who would be able to take advantage of this? That’s right. Joe Gun Shop.

With cryptocurrency, there is no middle man. There is no central authority. There is only, in the simplest of terms, a network of nodes which log the exchange of currency from one address to another, and once they all come to an agreement that Joe was paid by Bob, it is recorded to the blockchain. No take-backs. No middle man. No government permission. No stopping the signal.

This is the currency we should be prepared to accept as gun owners. Liberty with your money is just as important as the first and second amendments. When every payment processor says no, we won’t service the gun industry… then we can simply say… we don’t need you and you are irrelevant.

This is the way:

Of course, it takes education to understand something so different. Older people don’t seem to understand the process and develop their own mythology around cryptocurrency. Let me give you a snippet rundown of the two big dogs:

The biggest and best of them, Bitcoin, has a huge following and is perfectly positioned to become digital gold. There are only 21 million and there won’t be any more created. It’s a feature. As an investment, it has outperformed every other asset since its inception. The base layer transacts slowly, but a second layer (known as lightning) allows us to transmit the bitcoin within seconds much like a credit card.

The next big dog is Etherum. It is programmable money. It allows the creation of smart contracts that give it unique properties such as being able to earn 3-10 percent interest on a dollar-pegged stable coin… with no banks needed. Oh, yea… you can also take out loans without a bank too. The coins interact with smart contracts and the possibilities are almost limitless.

Unstoppable money just happens to be the safest form of money. You have seen news of “exchanges” getting hacked. True, exchanges do get attacked, but the industry has grown with self-insurance, better security practices, etc. This is a new industry with new problems. These problems are being fixed rapidly. Keep your coins off the exchanges. Liberty and freedom come with responsibility. Sound familiar? The base level of security is your seed phrase. Comprised of 24 words, this phrase is your key to find your coins in the event that your phone or digital wallet is destroyed. Hackers cannot break the 24 words. The technology isn’t there to do so. Every computer on earth firing at once trying to solve that 24 word phrase would take more time than the existence of the universe to crack.

A properly secured seed phrase (which is a backup of your digital wallet) is as secure as the safe, or location that guards it. If it is lost or hidden so well that no one can find it after you die… then there is no recovering it.

The problems with bitcoin is volatility. Understandable someone doesn’t want their money fluctuating wildly, but when the alternative is no money coming in then gun shops and gun owners must find a way. Also… consider than over 90% of all wallets are in profit at this time. That means it’s been growing silently in the background as large institutions begin to take positions. There are worse places to store your money.

There is no low the liberals will sink too, and applying pressure to credit card companies, as well as banking institutions, are inevitable. “We don’t serve yucky gun owners” will be the virtue signal as their ground team burns out poor inner-city communities and riots over such horrible things as a Lincoln statue. We need to be flexible. We need to remove ourselves from their economy and let the vine wither. We need options. We need unstoppable money, the right to speak freely, and the ability to bear arms. I am not saying you should learn about this stuff, but rather you NEED to learn about it. I urge gun owners and gun businesses to start learning rickety tick. Our choices are narrowing every year and time is a luxury we don’t have. We must make our own way.