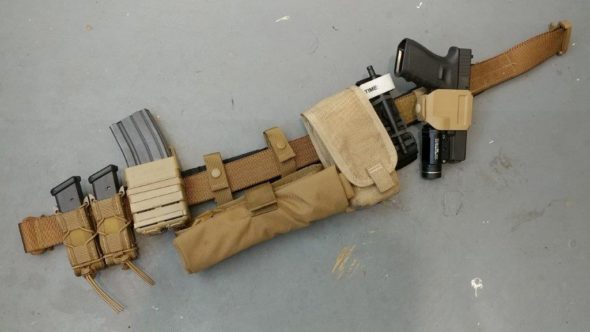 Today I am going to cover my Gun Belt Setup. It’s essential that we have a gun belt. Or back pockets. One will hold a tourniquet and other accessories, the other will hold a magazine… and to be honest if you can rock a course or event wearing only Dicky’s while doing tactical reloads and partial mag retention from only your back pockets, you are a better man than me. For the rest of us, we need a gun belt:

A gun belt holds a few essentials. First aid. A pistol. Magazines for said pistol. Magazines for rifle. Slim Jims. Twinkies. Etc. Over the years, I have used a MISHMASH of components to shoot courses and events. Kydex, soft pouches, frequent flyer belts, tec-lok clips, etc. It all works fine, but it doesn’t seem melted together as much as it could. I have a box of mishmash kydex, and I would be happy to send some random kydex goodies to a few readers who comment down below. Not all of it is new, but hey its a free surprise for you because I am feeling good to be back behind the keyboard. So now that I am clearing out the kydex, I want to show you the belt I have worn for the last few months. Without further ado:

The Cobra is the base of my belt setup. It has the high-speed buckle thingy that can pull semi-trailers without unclasping. It is high-speed brown. It exudes “I know what I am doing or at least watch enough YouTube to look the part” sex appeal. Actually… it’s a belt with Velcro on the inside and outside with a fancy buckle. To thread it into pants, you need to remove one side of said buckle and then thread the various components through the belt and

The neoprene liner is comfortable and fast to apply, though it is less secure than the Velcro “hold up your pants” inner liner that is also available.

Who’s got time for threading 20 accessories through your belt and pants? I purchased the HSGI Cobra belt with the intent on mounting it to the neoprene liner and/or to attach it to the inner Velcro lined belt that goes through your pant belt loops. So in effect its a two-part system. Belt + Bat Compartments, and either the Neoprene padded liner, or the Velcro belt that holds your pants up.

The system is nice since it no longer requires threading the belt through your pants, and both the neoprene (comfort) and inner Velcro liner (security) do the job well. The neoprene is more comfortable, but it can shift a bit; the other won’t shift at all and allows you to remove the gun belt without having your pants fall down. Schweet. The neoprene is grab and go clip it together, where as the Velcro liner means you have to put on a Velcro belt then your cool belt.

What I am actually wearing. Suck it Bat this is cooler and you know it. *cries in jelousy* I should buy a grappling hook gun to round this out.

My catalog of gear starts with the Crye Precision GunClip. It’s a neat device, allowing the user to adjust cant, belt width, and it holds a few Glock models with and without weapon light and suppressor. It should hold a Roland special no problem, but I don’t know for sure. I would ask the guys at P&S but their writing is so dry I might die of dehydration. You guys will have to wait until I jump into the fancy pistol game.

The gun clip works with the belt super good, but it does have some deficiencies for shooters worried about light discipline and retention.

As much as I like the product, the GunClip does have a few problems… I found that re-holstering activated my weapon light quite often, so if you need light discipline, this ain’t the holster for you. Also, some gun writers have noted that you simply can’t remove the pistol when the clasp is locked. Not True. With the weapon light removed, you can easily pull the pistol right out.

The video below illustrates what I am talking about, and is basically this article in a shorter, watchable form.

It is far slimmer against the body than several other holster’s I have tried, such as the Safariland Level 2 retention holster. The Safariland gave my stiff HSGI belt a U bend and thus a pressure point. The GunClip fits the belt much better than other products I have tried. I will keep it for now.

My TQ holster is dirt cheap and effective.

After that, we have a TQ held in place with a ranger band. This brand of TQ has a Velcro backing that interfaces with the HSGI Velcro perfectly, creating a minimalist method of securing a TQ that is easy to use and stays put. All for the cost of a cut up inner-tube or your daughter’s hair tie. SOLD. Don’t need no fancy TQ holsters in this house. I can literally walk five feet and look in a corner and find enough black hair bands to secure a lifetime of TQ’s. The joy of daughters!

Next up, a dual M4 pouch. This is a utility pouch. It can hold any one of the following: two M16/M4 magazines. One AR10 magazine. One AK-47 magazine. Range Finder. Monocular. Additional first aid. Candy. Shotgun shells. Hundreds of foam earplugs. Cyalume Lights. An ACOG. A Slingshot. Small plastic water bottle. Dog treats. Multitool. Boonie Hat. Mosquito net. I mean, it’s a utility pouch. I won’t head to the range without it.

It holds so many things. Never leave me generic dual M4 magazine pouch.

Past that is my Condor dump pouch. It’s new and replaces my Maxpedetion rolly polly. It’s new, so not much to say. There are many like it, so we won’t spend much time here.

It’s a Condor dump pouch. It can hold a dead mouse with ease. I will name him George, and I will hug him, and pet him, and squeeze him…

Next up: Magazine Pouches. ITW FastMag (a dear friend of many years) and HSGI Taco‘s round out the setup. I am late to the TACO game. I have lots of kydex magazine holsters and, you know… the taco’s are slimmer, lighter, don’t rattle, and adjust to multiple magazines. As a Hispanic who doesn’t care about mexico (little m). I have no excuse for not jumping into the taco party sooner… but that might be cultural appropriation because I might or might not be a white Hispanic, whatever the hell that is. I plead the fifth. I will continue to culturally appropriate everything around me because America. HSGI Taco’s it is then. Come at me SJW heathen!

The whole setup cost a pretty penny and I have put it together over the last year. I am glad I can clear out some legacy kydex systems and move to a more unified, more comfortable , and more secure setup. I would say I have around $200 to $250 ish into the belt as the belt alone retails around $79 plus the two liners (another $50) plus tacos ($39), GunClip, and the costs added into the legacy gear I already owned.

But then again, if your idea of mag retention your back pocket and rock hard glutes, you might be able to get away without a belt. For the rest of us, let’s continue to cover belt systems and web gear. That’s all for this week. Next post will be PROBABLY about building a budget belt/web gear. I am thinking we will build the article around surplus. You don’t need to spend $200 to carry your load-out.

So what do you guys think of the video + article? Am I ramping up the quality? Do videos give you a hard on? SOUND OFF BELOW! Let me know guys and don’t forget about the kydex comments! Only two people will get a kydex package from TNR! It’s USED gear so don’t get picky!

See you next time!