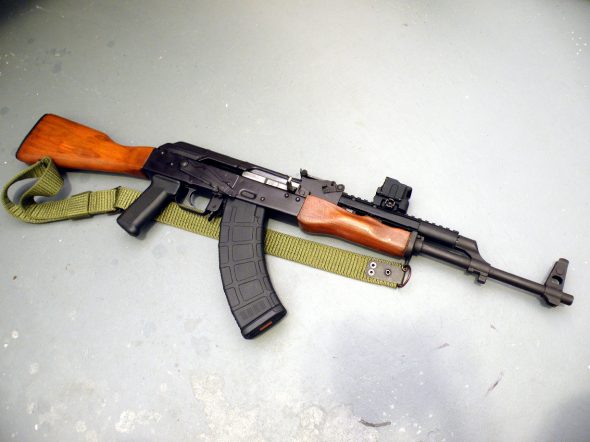 Shouting “Insallah” before discharging your AK only improves accuracy so much… to truly understand the platform we need to look at it from a rifleman’s perspective. Where is the AK deficient? To what range is it capable? What can be improved? What cannot be improved? Last time I wrote about the AK, I mentioned to readers that improvements to the AK would be in line with a budget friendly approach. After all, the AK is a budget platform outside of the USA, so let’s try to make smart upgrades that won’t break the bank. So where do we start first? I believe ammunition is where I will start.

If AK’s get a bad wrap for accuracy, it’s likely going to be tied closely to the ammo you feed it. The 7.62×39 is no 6.5 creedmoor, and when shopping for ammo, the new AK shooter will no doubt grab the wolf. It’s cheap, readily available, and the limited ammo choice makes cheap steel a really attractive option. Part of the reason 7.62×39 hasn’t gained much of a following outside of the AK, SKS, and a few odd-ball bolt guns is that it is just not that exciting. People don’t win matches with it. Companies don’t pursue development of it. Worldwide military spending on R&D of this round is dead.

It’s outclassed in so many ways by today’s offerings, from 5.56 to .308, and new hot products like 6.5 Grendel and Creedmoor… the 7.62×39 is simply out-dated. In short, it doesn’t excite enough important people with deep wallets to pursue further development.

Part of this is the antiquity of the round itself. The 7.62 was developed in 1944 and has since been surpassed by military ammunition that is smaller caliber and higher velocity. A flat trajectory means easier hits on target. The 7.62×39 doesn’t have the luxury of speed or case capacity to make it a solid performer in the venue of modern small arms design. The world has moved on.

So this low quality fodder sits on the shelf. Cheap wolf. Cheap soft points. A few decent loads in the mid price range from a handful of manufacturers. REALLY expensive match 7.62×39 that no can afford from Lapua. That’s pretty much it. Wolf (or other com-bloc equivalents such as Brown Bear or Monarch) wins over many consumers with its low price and reliability in the AK platform… so is it the cheap ammo that gives the AK a bad rap?  Let’s check it out.

I decided to break down ten rounds of Barnaul ammunition. The powder is a extruded powder and was a bit finer than Varget. Mass manufactured ammo is no accuracy king, and I expected there to be a large range of deviation from round to round in regards to powder charge.

I used a bullet puller to drop the bullet and measure each powder charge. I discovered a large variance between each load:

The powder load in Baurnal 7.62×39 metered all over the place.

That is quite a bit of variance between cartridges. We will fix that by consistently metering the load to 24 grains and then return it into the casing.

Next up the pulled bullets were examined. Each round is a standard steel jacket with a copper wash and a lead core. While they look good enough for “gov’t use” I decided to forgo the standard ball round and move straight into a higher quality projectile. I purchased 100 Hornady V Max bullets in 7.62mm or .310 caliber. While some users report acceptable accuracy with a .308 diameter bullet, I decided to go with the Hornady to better match the dimensions and specifications of the 7.62×39 cartridge.

Each casing was simply re-loaded with an appropriately weighed powder drop, and topped off with a VMax projectile. No de-priming was involved as I simply re-used the un-fired steel case post bullet pull. I believe the consolidation of the powder and higher quality bullet will improve the base accuracy of the Romanian Sar-1 I will be testing.

The “Mexican Match” requires a bullet puller (or pliers) and simply swaps the standard projectile with one of higher quality… In this case, a .310 V-Max.

This re-loading process is known as the “Mexican match” cartridge and is an easy way to improve a standard ball load.

I also will attempt to examine the curious claim that the Ultimak rail seems to enhance AK accuracy.

The theories behind this are varied, but examining the most popular theory perhaps points us in the right direction. Barrel whip is a well documented phenomenon; barrel whip is a resonance in which the barrel bends and moves in response to the projectile and propellant charge.

With the Ultimak clamped to the barrel, it is believed to enhance accuracy by stiffening the barrel near the front trunnion. The two U-shaped clamps pull the barrel onto the base of the rail and there appears to be is significant mechanical stiffness added to the barrel… but to what outcome remains to be seen.

The Ultimak clamps directly to the barrel and possibly increases the stiffness of the barrel past the trunnion.

I will test the changes one load at a time with 10 round groups. I will test a stock AK with standard factory fodder, I will then will shoot the enhanced “Mexican match” ammo, and finally the Ultimak will be clamped to the rifle to test if accuracy is further enhanced by the addition of the hardware.

I brought the chronograph, but unfortunately, lighting conditions did not yield any usable results. A chronograph works best when in a shadow or on overcast days.

Range day started with a lawn mower and a fresh 100 yard range. I set the target stand down range and battle zero’ed my AK with a 14 meter zero target. While not dead on at 100 yards, I left the groups as is due to time constraints.

The results from the tests were surprising.

Standard factory ball was ALL OVER THE PLACE.

The Stock AK with standard 7.62 fodder (in this case, “monarch brand”) was abysmal in the accuracy dept. Two rounds from the ten round group were on the edge of the backer, and I was unsure if they were from this range session or a prior session.  I ended up with 8 points of data which I was sure were my shots. The mean radius is 3.289 MOA with a max of 8.433 MOA extreme spread. That type of grouping doesn’t inspire confidence. For reference, the boxes are 1 inch and the bullseye target pasted to the sight in target is a 8×11 sheet of printer paper.

Simply pulling the bullet, re-measuring the powder, and adding a better projectile resulted in a mean radius of 2.071 MOA with a ES of 6.28 MOA. This is a solid improvement over factory ammunition for little cost other than time.

Next the Ultimak was installed in the field. I followed the instructions included with the Ultimak.

The Ultimak was tested with more “Mexican Match” ammo. I was expecting to see at least the same degree of accuracy or perhaps an improvement based on the claims of others on the interwebs. Nope to all the above:

Mexican Match loads plus the Ultimak did not get along.

As you can see, I clearly experienced a degradation in accuracy. My high quality ammo was reduced to inaccurate fodder with even worse results than a factory AK using factory trash ammo. The Ultimak remained firmly in place once I re-examined the rifle. It was rock solid and the hardware was still tight. Notice that the claim of the Ultimak not needing to re-zero are true. My grouping remained in the top right of the target… just wildly inaccurate.

The AK gets a bad wrap for inaccuracy. The platform is no match rifle, but by simply adding higher quality ammunition, we can add more consistent performance to the rifle. My findings with the Ultimak were disappointing. Many users of the Ultimak claim to have seen an increase in accuracy with the device, but I did not seem to reap those same benefits. I will remove the Ultimak, inspect it, and then re-install it at home and re-test at a later date. If suddenly my groups tighten I will report back. If the changes were a bust, consider this my final report on its performance from my AK.

A practical AK will need a proper diet of quality ammunition to show its true capabilities. While the 7.62 is no match for the R&D of the 5.56 over the years, the 7.62×39 can be a devastating cartridge when a quality load is used.  It is important that we move away from the cheap factory fodder and reload to maximize the AK’s potential. Since the AK launches brass into the stratosphere, utilizing factory steel casings as a starting point for ammo development will be a cheap and worthwhile proposition.

I decided that the next course of action will be to continue to develop my blend of “Mexican Match” reloads, and add a side rail mounted optic to remove the Utlimak from the equation should it continue to give sub-par performance.