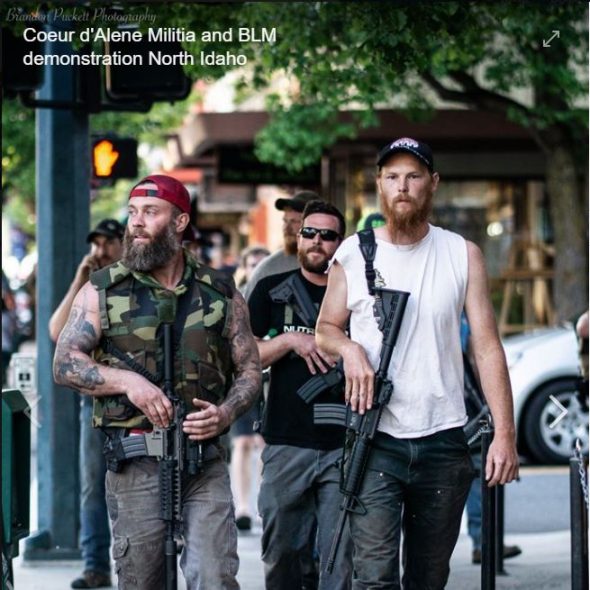 The Militia is often touted as “un-necessary” or non-existent… however in the last few weeks, we have seen countless examples of patriots mobilizing themselves with arms at ready to defend their communities. The keyword is community. They have moved into a position to protect what they know. Cour d’Alene, Idaho is a prime example. With rumors of the violence in Spokane moving Eastward, the residents of Cour d’ Alene mobilized at arms downtown to dissuade and protect businesses from the mindless, backwards riot. The fact that it never materialized is no matter… for their duty to protect their community was fulfilled by men and women with firearms. Would you slap a pitbull sitting peaceably in a yard? Me neither.

To the uninformed, the narrative of “hicks without training” comes to mind. They can’t be trusted with guns, they aren’t professionals… the VERY PROFESSIONALS THE LEFT RALLY AGAINST. It’s partially true, as the militia can run the gamut from a ragtag dude with a Hi-Point at one end to a fully kitted out patriot with hours of training logged on himself and his gear.  Some of the militia that I have seen online… I would seriously question if their NCSTAR sight was zeroed. As for some others, there is no question… they take their equipment and gear seriously enough to spend time, money, and sweat at improving their skill at arms. The rifles tell the tale. Every knick, scratch, and bare metal gouge are proof enough that a rifle is used as the tool it can be.

People protested in front of the Alamo in downtown San Antonio, Texas, U.S. on Saturday, May 30, 2020 to protest the killing of George Floyd in Minnesota while he was in police custody. Photo: Matthew Busch, For The San Antonio Express-News

The Media has not made a peep of “the militia” because the optics would look bad for the leftest tabloids. The “right-wing” militia, which is often comprised of multicultural, like minded patriots, has secured territory without having fired a shot. They have mobalized to defend a patch of land, business, or monument from arson, vandalism, and theft. Once the threat is rumored to appear, so too have the militia. The militia has been present in countless cities, towns, places, and yet they are largely ignored. You can see them. I can see them. They have been alongside the police in defending landmarks… defending the Alamo. Is this real life? Sadly, it is. Recognize them. The Militia is here.

The Militia is comprised of every able-bodied man, and woman… their call is to defend their community from those who would seek its destruction. Some are ragtag, some are squared away, but all have shown up knowing full well that under these conditions of rage and anger they can catch a bullet just like anyone else. The Militia is alive and well in America, and for everything that has gone wrong… from police brutality, from rioting, from hurricanes to floods… they have arrived bearing arms to protect, defend, and if necessary rebuild their communities.

You are the Militia.

← Barrel Bedding for the Precision AR-15: A How To Guide
Brownell’s Coupon Codes for TheNewRifleman Readers: →
Scroll Up