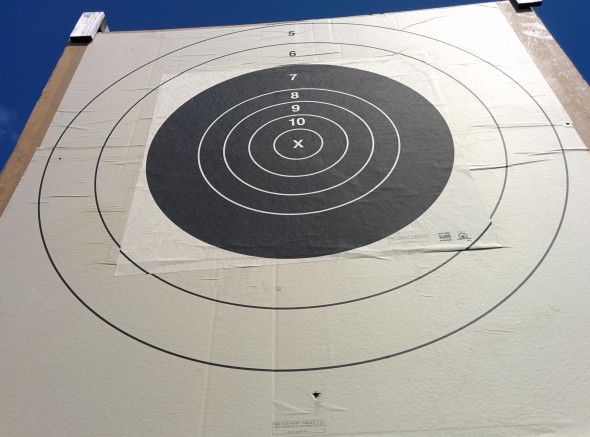 National Match dead-blow hammers? Warming up your turrets? $2500 dollar optics? Things are getting wonky in the world CMP / High Power.

There is a big learning curve going on in the High Power / CMP community. It has to do with optics. I have been following a few threads that follow their collective experiences with optics. In just a short time, they have found a number of quirks in variable optics.

The first quirk is that of simple repeatability. What the community found is that irons were far more repeatable than any optical assembly available. The geometry of the A2 / A4 sights for example allowed manufacturers to create a high quality thread pitch in the drum assembly which allowed precise click adjustments with no concern for wearing out the drum. Meanwhile, precision optics and their geometry and design require much more expertise to ensure reliability and repeatability.

Optics are comprised of a tube within a tube and the inner tube moves as adjustments are made via the external turrets. As you turn the turret, it pushes the tube on the X and Y axis, and a erector return spring offers counter force to push it firmly against the adjusters. Every time you compress a spring you will eventually cause it to lose some strength. What shooters are finding is that sometimes the return spring won’t allow the new adjustments to settle in without a tap to the optical assembly. Did the adjusters settle? Is my scope getting too old and are the erector springs losing some pep? The overall worry is that to obtain a optic that will survive the rigors of the sport, one may have to spend some decent coin. Or you need to smack your current optic… if in doubt.

Thus the National Match Dead Blow Hammer has thus been born. While it may exist only as a joke, its development has been spurned by a real problem. Them adjusters often need a smack after adjustment. Will they settle and track perfectly every time you adjust them? Do you want to risk making an adjustment to a sighter shot while not realizing that your sight was actually off a minute or two before you made your changes? No? Then smack it to settle the assembly.

Or go one or two clicks past your desired setting and then go back to it. This is another solution that has been suggested. Or just smack it.

Or warm up your turrets in cold weather by working the assembly over and over before adjustments. Even the viscosity of the grease is a concern as shooters feel that many optics are missing clicks in colder weather. The dial may click over, but did the tube inside move? How can you tell?

Smack it again, make it know who sets the dope around here.

Did you even lap it by running it lock to lock several times before your first match?

These aren’t new shooters spreading rumors, these are established national champions and distinguished riflemen who are finding that things just aren’t as consistent as they were with irons.

So one of the conclusions is that budget just might not cut it. Even a certain custom shop product is having trouble with tracking without smacking. The average purchase seems to be sub $1000 dollars for these shooters, many trying all number of brands from Burris, Vortex, Atibal, Leupold, and all manner of brands. Some shooters shoot a match without problems, and then others say they lost points because of inaccurate tracking. Which products will come out on top, and which will stand the strain of frequent adjustments over its life will be the question. Who better to work over your scope assembly than shooters who make frequent adjustments, demand repeatability, and are budget conscious to the point of squeezing a penny into a copper wire?

The optics sweet spot is $500. Is there an optic that the average working man can afford which offers durability, longevity, and precision adjustment? I await a match eagerly with my Velocity. Nick at TTAG noted it had good tracking, and in my own limited tests it came right back on zero when I adjusted gross movements and back to zero. We will see. While we have a few good options at a working mans price, at the other end of the spectrum we have eye watering products that make me feel as though they are truly out of touch with your average human’s goals and price range.

Made Just for High Power:

March has released its $2500 wallet scorcher, the MAR1071…  made just for High Power. It actually looks like their equally expensive 1-8x optic, but perhaps it is simply pinned in place from 1-4.5x max. Reviews have been favorable, and the Army Marksmanship Unit just ordered $25,000 worth on yours and mine taxpayer dime. Must be nice.

These boutique, and I do mean boutique, products aren’t made for the average rifleman. They do the sport no favors at this point, as it appears to others that to excel you need a rather expensive scope to ensure precision predictability and high build quality. You can always compete with irons, which is still allowed. In that case you will need your rifle and some national match irons which should run around $1000 for the whole shebang.

If you add in optics, expect to add at minimum another $700 dollars for a decent entry level optic and mount. At this point, it seems like the best bet for new shooters it to slap a A4 national match carry handle on their rifle and just go to a match to work on the fundamentals. What this does is really puts us back at square one: the cmp implemented these new rules to spur on new shooters who don’t have a NM rifle without considering the current equipment availability to the optics ready rifle shooter. We have a myriad of products that are affordable but not altogether repeatable / long lasting / suitable for the sport and a handful of really expensive options that may offer what a shooter needs. We are in the calm before the storm as the market adapts to this relatively small segment of shooters. That’s what concerns me, is that it *IS* a small market, and will there ever be a durable, tough as nails, repeatable, AFFORDABLE optic that can compete with plain ole Irons?

It’s All In the Reticle?

So what type of reticle will work best? What has the High Power crew come up with? Some have suggested (including myself) that a etched reticle may offer the most repeatable and affordable adjustments. If you shoot with a Christmas tree stadia, then you, in theory, wouldn’t need to adjust the turrets again. The only problem is that you can only get so small before the reticle’s markings become too difficult to resolve with the human eye.

My old Viper PST had 2 minute tick marks, and that’s about as small as you will be able to get and still be able to see them and not get lost on the individual tick mark. At a max of 4.5x, we just can’t zoom in enough to see smaller stadia markings. HP shooters are used to 1/4 x 1/4 minute click resolution, and etching reticles would be of limited use. I would be happy as a clam for a optic with 2 minute tic marks in the reticle’s windage with 1/2 x 1/2 W and E, but that’s not precise enough for the big leagues. Scratch that idea.

Etched reticles are a great way to ensure repeatable holds without adjusting the optic, but much smaller than 2 minute tick marks are too difficult to resolve.

The new rules have created a unique opportunity to evaluate both entry level and high end products in a field of shooters that demand precision. Little did the CMP know that changes they made will cause a huge learning curve / monkey wrench thrown into the High Power world. Is it an optical arms race now? In a way, yes and no. As the market responds to the demands of shooters, products will improve for the better. With each development cycle and each new feature put into an optic to make it more repeatable, we all benefit, not just the HP crowd… but what if you want to get involved but fear your equipment is outclassed?

If you aren’t confident that your scope is repeatable, test it, and if it fails, just remember that shooters have been using irons to clean the X for decades and while irons might not be on the cutting edge of the sport, irons can get you learned enough to become competent when you step up your glass in the future. Perhaps by that time a usable, affordable optic option will emerge as the standard “go to” for the sport. It may already be on the market, we just have to let the High Power crowd navigate to the best option. As the king of rifle sports evolves, so too must the equipment and shooters involved in it.

and we didn’t even touch on external adjustable scope mounts, Elcan style optics, flexion (or rather bowing) of the flat top upper under sling strain and changing zero, and which optic mount will stiffen the upper the best? Reading about these shooters and their discoveries is pretty much amazing. Till next time!