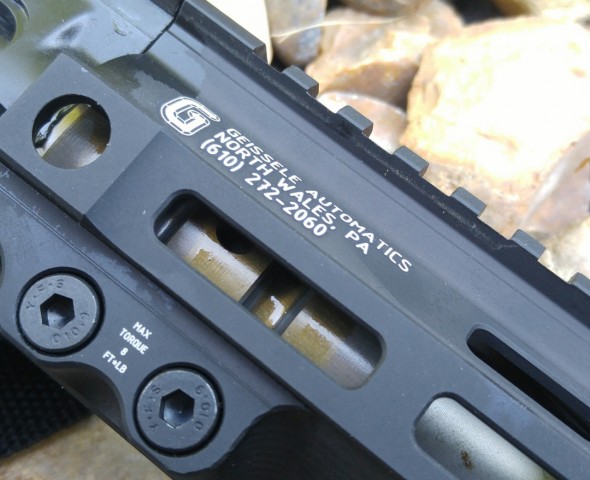 The recent 4th of July clearance at Geissele gave me an opportunity to try a rail I wanted for some time, but until this point I never felt the need to drop another 200 on a rail when I had a perfectly good Larue 12.0 on my rifle. Well, the time finally came to upgrade.

The Geissele Mk4 was catching my eye as I wish to clone a very popular civilian rifle style known, lovingly, as the CWAR which I will cover at a later date.

Upon glancing over the Mk4, I could tell I was holding a quality rail… and the rails defining features, from my point of view, are the barrel nut / attachment system and lighter weight than my old quadrail.

The barrel nut is a long, smooth nut without any teeth, so no need to worry about timing. The barrel nut and its length seem to give the rail substantial strength in resisting movement or play of the rail vs the receiver. I can’t measure it per se, but if you handle the Mk4 and then handle a Larue 12.0, objectively the Mk4 feels stiffer and appears to resist flexion more. Again, that’s an objective observation, but one that inspires confidence in the rail.

The Mk4 has a few sling swivel locations, and the picatinny rails up front are perfect for a light, laser, bipod, or other accessory. The middle and sides allow for control accessories with MLok mounts.

I torqued the nut to 45 ft lbs. with the included wrench, slid the hand-guard over the nut with the aid of a rubber mallet, and locked it in place with the two long allen head bolts included. The fit between the nut and the rail is best described as a tight friction fit. It’s clear that the manufacturer cares about tolerances as any tighter and I would think something is wrong. It slides on tightly.

Two crossbolts trap the rail and barrel nut to ensure the rail cannot slide forward or backwards on the nut. Two small set screws finally aid in keeping alignment by tightening against the upper receiver. All screws received some blue Loctite courtesy of myself.

The rails are exactly where i need them.

One of the benefits of the Mk4 over the smooth Keymod or MLok models is that the rails most likely to be used are milled into the rail itself. Up front there are three short picatinny rails that cannot detach from the Mk4 and that’s precisely what I was looking for. Long time readers know I frequently see components loosen up on rifles that are pushed hard. I have seen loose optics, loose irons, and I am sure the vibration will eventually loosen MLok or Keymod mounts all the same. Since I know I will use the forward mounted rail for my irons and light, I figured they were a safer bet than detachable accessories on top of detachable rails. That’s just too many screws to come loose!

Like the Larue product, the craftsmanship is exceptional here. This was a blem, and I couldn’t find the blemish on the rail anywhere.

The rail does not fit the hand as well as my Larue 12.0, though it saves three ounces over the Larue despite being an inch longer. The increased sight radius is a benefit to the shooter, and the stiffness of this rail make me feel as though it is one of the better rails on the market to support fixed irons at the end. It feels damned stiff.

In this photo, the crossbolts are visible along with one of the set screws that tighten against the upper receiver. The setscrew is located just above the receiver take down pin.

When I get some MLok rail covers, perhaps the rail will feel better in the hand. Right now it feels like i am holding a + sign in my hand.

Is this rail worth the upgrade? That’s going to be splitting hairs pretty fine. At $250, it’s a pricey investment for your kit. Had I been able to demo this side by side to my Larue 12.0 before buying I would have said PASS at $250, but I grabbed the rail for $160 during the fire sale. At that price I give it a OK, but the benefits to cost ratio over upgrading from the Larue 12.0 aren’t substantial enough for most shooters to junk their old quad or other rail. However, if your working on a NEW BUILD and haven’t invested in another system already, the coin drop for the Mk4 or Mk8 is easier to justify. It’s a solid rail, but don’t feel the need to run out and jump on the Geissele train if what you have is working for you right now.

I really like the fixed rails up front, and I am going to sound like a broken record for saying this again… but screws on screws on screws make me think something will wobble loose eventually. For example, when I took the gun apart to install this rail, I found that the gas block on this build was a few range sessions away from losing the gas block set screws, and they got a helping of Loctite before being put back in place. Fortunately Ballistic Advantage drills their barrels for a roll pin and that’s the best insurance against set screws falling out of your gas block.

My final take: Get it on sale, or buy it outright for a *new* build, but don’t ditch your old rail if it is working well for you… put the $260 towards ammo or optics. The quality of the rail is apparent, and I do believe it likely is one of the best rails on the market, but spend your coin wisely as troubles lie ahead.

← Why the German #4 Still Rocks
Finish All the Projects! →
Scroll Up