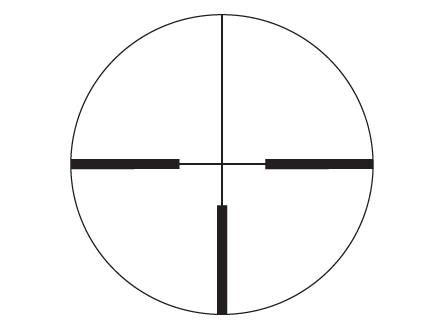 There are lots of whiz bang reticles on the market, but one of the revelations I had about a year ago is how important the “old time” German #4 and similar designs are. I have owned a variety of optics over the years… all with different levels of quality and reticles, but after obtaining the Velocity with its free floating German #4 style reticle, it completely blew me away with its versatility.

As an all around reticle, the G #4 is the bomb. One thing that now irks me with other reticle designs is the small, thin reticle itself. Some of the design philosophy of modern optic manufacturers is either to make a big bold reticle design such as a horse-shoe, and then thin out the smaller parts of the reticle for longer range precision, while others follow a form where the center dot illumination takes priority over a very thin reticle which is about useless without the illumination.

Take a quick look at this demo video of a Schmidt & Bender 1-8 short dot. Really expensive and cool. Red dot bright center illumination (which is off for this video) and a uselessly thin reticle.

That’s crap right there folks. If your illumination dies, so too does your ability to use that reticle in dark, shadowy environments like the woods… and it becomes even harder to use at night. That is a poor reticle design for any defensive optic. As quality as the rest of the optic may be, this is a big fail point right there in my opinion.

Here it is in the dark with a tactical light from a post on optics talk:

With the red dot on this optic has no problems, but lose that dot to damage or battery failure, and the thin reticle becomes a hinderance to solid low light shooting.

We added some design cues from the G4 reticle. Much easier to use with a weapon light. Now we can bracket the target quickly when using a weapon light even without reticle illumination. This is an old photo and today’s weapon lights are much hotter, offering even more contrast between a G#4 reticle and the target.

Let’s take a look at the ACOG TA01 which has a German #4 Inspired reticle:

TA01 ACOG with Tritium illumination only. Nice and bright, easy to alight with target.

TA01 ACOG with Full target illumination. Even though the center of the reticle has dissapeared, the thick cross bars allow easy visualization and centering of the target. Cross-hairs DONE Right!

So you can see, in dense foliage, or at night, thin reticle designs suck if the battery goes dead. As we become more comfortable with battery powered optics, perhaps this concern will continue to diminish as products continue to gain in reliability, but reticles with a design that offers a “backup” against dead electronics are still important. To be fair, these examples aren’t the highest resolution pictures, but the concept is still present… small, hard to find, thin reticles are a poor design choice in a all around optic.

Even the venerable ACOG suffers from this as well:

The fiber optic certainly eliminates the need for batteries, but when looking from indoors to outdoors, you have a tiny, black reticle that can be hard to quickly acquire. This needs some crossbars.

From indoors to outdoors this ACOG suffers from a distinct lack of German #4 thick cross bars. Integrating them into the optic would allow the shooter to bracket the target when the fine details of the very thin standard reticle are lost.

Here we added some additional contrast in the form of G4 style crossbars. As you can see, in differing lighting conditions it makes sense that an optic should have multiple inherant design considerations to maximize your ability to hit the target in varying conditions.

In the above example, we assist the washed out ACOG reticle with some crossbars. When lighting conditions are dim and the illuminated reticle doesn’t catch enough light to POP, the black crossbars add additional contrast to the sight picture which allows good target bracketing and guides the eye to the center of the reticle. In this example, the BDC should still be usable. If you shined the weapon Light and created a hotspot, the fiber optic illumination would wash out and the best bet for fast target acquisition would be the thick crossbars.

The old time G4 style reticle… adapted into numerous iterations, it features a fine center crosshair and three bold lines at 3, 6, and 9. It’s an iconic reticle used in movies, by hunters, and it should be utilized by the AR15 community as well, but it is often passed over for “newer” designs that don’t always do it better.

The Atibal Velocity made me a believer. I didn’t know what I didn’t know, and now I know. Sold my tiny, hard to see, red triangle Trijicon TA47 and I LIKED that optic, but it failed when running a weapon light or from indoors to outdoors. I would however, buy another one with the G4 style crosshair reticle.

So what does the G4 reticle do so well? The contrast of those bold lines allow you to bracket your target in changing lighting conditions and background colors. Having such a large filled reticle area helps capture the eye and while the fine center lines may be lost in darker woods, the bold crosshairs will always present the highest level of contrast to anything other than a pitch black target / background. The thin crosshairs will allow you the precision you need for solid shooting when you can settle into the optic. Illumination via weaponlight gives you nice black crossbars that let you bracket the target quickly.

The Velocity’s illumination isn’t quite daylight bright, but the German #4 helped me stay fast on target by allowing quick target bracketing with the cross bars.

So I hope I made a somewhat convincing argument for traditional crosshair G4 style reticles. Think of the thick crossbars as a backup for unique lighting conditions where illuminated reticles may have washed our or batteries fail. Many of the optics coming to the market continue to eschew the traditinal reticle design for very spartan and hard to see reticle designs, and they lean heavily on illumination to make the reticle catch the eye. While optics have come a long way in terms of the technology inside the tube, not every design has been an improvement over traditional heavy woods G #4 style reticles. Imagine having a short dot (exampled above) on low illumination while roaming around a dark area, and then needing to splash the target with your 600 lumen weapon light for proper ID. You just washed out your illumination. Incorporating some of the design elements of the G4 reticle would improve many of the existing reticle designs which feature thin, hard to find reticles.

I hope you keep some of the above in mind when choosing a do all optic. Many of us will go through a variety of products before finally settling on a design that works for us, and I hope to save some readers the money I wasted on thousands of dollars of optics to come to this conclusion.

On a special note, Atibal will be releasing a 1-6 Japanese optic with some of the design considerations mentioned above. We had a nice conversation on the utility of optics certain optics on the market, and I believe we both made some headway into a reticle design which will aid your shooting in many scenarios. I can’t wait to see the final product and appreciate Jimmy receiving my input.

← Comments Aren’t Working!!
Thoughts on the Geissele Mk4 →
Scroll Up