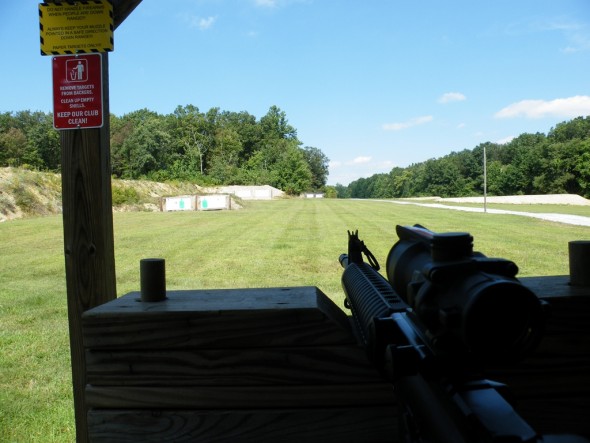 I have been studying heavily on the science of marksmanship and the DMR style rifle. The Designated Marksman’s Rifle is a weapon given to a soldier with additional training in the art of marksmanship. Our military has several weapon variations on the DMR concept, but whats important is that they are characteristically equipped with a mil-dot optic and are accurized in some degree . While any of us can clone a military DMR weapon such as the Mk 12 Mod I or other variations, I recommend building a gun around your intended use. My intended use: I want to be a versatile Rifleman.

Lance Cpl. Steven Zandstra with a Mk 12 Mod 1 SPR. Sure we can clone the gun, but are their better components and parts on the market than what our military uses?

My focus is on practical marksmanship. In the last year I have studied MOA, Bullet Drop, and applied what I learned in a High Power match. Due to family obligations, range time has been sparse this year. I am currently developing a plan for updating my (modern) rifle and I am deciding what I want out of a shooting system. I want to be a practical rifleman. I want to be fast on target at any and all distances. My goal is to develop a shooting system that gives me margins for error in unknown distances, as well as giving me the tools I need to estimate and fire upon targets at a known distance.

That said, I have read a lot of theory around how to best utilize a DMR style weapon. I came across something called “Sniping 4th Generation” at the Everyday Marksman’s Blog; it is a system of marksmanship designed to give Swiss marksmen a quick method for getting hits from 0-600 meters, utilizing a 300 yard zero, and two holds, with a simplified ranging system. While the idea that I can hit a man-sized target from 0-600 meters with two holds sounds great… I just couldn’t get the calculations to work. With the Swiss S4G system, I calculate shooting the target in the knees or feet at 600 meters utilizing a dead hold to the head and 62 grain 5.56. That’s not exactly my goal.

So I have been developing a plan for my rifle and how to outfit it. The plan is to utilize a red dot in 45 degree offset with a 200 yard zero, combined with a 2.5-10x Mil (or MOA) optic with a 300 yard zero. I want to develop zones of overlap so I can make rough estimates of range… and if I am off by my estimation a bit, the round will still strike the target. This overlap provides me a cushion zone for targets at unknown distances, particularly to 400 yards. If no target effect is discernible at intermediate distances, I can “knock the hat off” to quickly compensate for bullet drop. Kentucky windage is used out to 500 yards to speed up the process of firing upon the target.

Shown below is my attempt to illustrate my plan:

Optical Overlap permits me to hold COM and get hits from close range to intermediate range. At a certain point (past 400 yards) I would need to implement holdovers and Kentucky windage. Click to enlarge.

This distance is characterized by a close range target. In this zone, it is critical that the shooter is the first on target. Here we must use techniques and equipment that emphasize speed over pure accuracy. I define this zone as anywhere from point-blank to 200 yards, for at these distances we can still see the features of a target and this range is a critical distance for engagement. Targets of opportunity are still visible to the naked eye; a weapon sticking out a window, a head peaking around a corner, hands, legs… all can be seen un-aided.

A red dot will permit quick engagement while being free of parallax and is a great fit for these ranges. Since this range presents targets of opportunity, I want to be capable of hitting any target, large or small, with no shot correction; a 200 yard zero and a RDS permits me to do so.

This distance is characterized by a mid range target which can still be seen by the naked eye, but details are diminishing. At these distances the un-aided eye will have difficulty seeing certain targets of opportunity such as a foot sticking out or a head. To assist my vision, I will be moving to a variable magnification optic here to shoot targets at these distances. Since targets are shifting and mobile, I don’t want to adjust my optic to fire upon a target. I want this distance to be defined by a few well-practiced holds over optical adjustments. A 300 yard zero will permit hitting man-sized targets at 300-400 yards with no change in hold. A 500 yard shot will require a hold on top of the head. “Knock the hat off”. Wind holds at these distances are repeatable estimations in the mind’s eye that require no adjustments to the optic.

I believe this approach will permit me the fastest possible means to get a hit on a target at distances which vary and where the time the target is presented is limited. I want to see what I am shooting at, hence the magnification, and I want to put rounds in the air ASAP, hence using only holdovers. The margin for error is here good. A full human torso permits me to err to the tune of 25ish inches in bullet drop. The two holds approach will permit my 5.56 to fall inside of 25 inches at these distances and if I am low… then the round hits the legs.

This distance characterized by a need and necessity of understanding your equipment, environment, and target. At these distances, adjusting my optics to match the shot, carefully reading the wind, and calculating target distance all come into play. Bullet drops at these ranges are so drastic that a rough estimate will likely lead rounds into the dirt. I want more magnification, and the ability to adjust the optic to compensate for bullet drop. Here, rough estimation won’t cut it… I want the science of marksmanship to guide any and all shooting I do at these distances. I would predict a target at this distance wouldn’t know I am there. The time to adjust my rifle, may be present, but I need to act quickly upon it to seize the chance and hit the target.

So there is my layout. A modern rifle with a sliding scale where my equipment lets me move my shooting from speed to precision on an as needed basis. Hypothetically, I can call a target at a rough distance and ensure quick hits from short to medium range. I feel confident I can master those distances quickly. Where I am not practiced is 600 yards plus. I will need to travel and take a course for that.

What I envision is a rifle with a  2.5-10x optic, and an offset RDS. This pairing should cover every distance an AR15 can reasonably achieve based on the rifle and the 5.56 projectile’s performance envelope. This concept obviously mirrors a DMR setup, but in reality you could pair this combo with any reasonably well made AR15 out there and you could be shooting that gun to 700 yards with the right projectile choice and applied fundamentals. I am just taking this concept and applying the fastest methods of shooting at roughly estimated distances, the goal being to ensure quick hits on target at all distances.