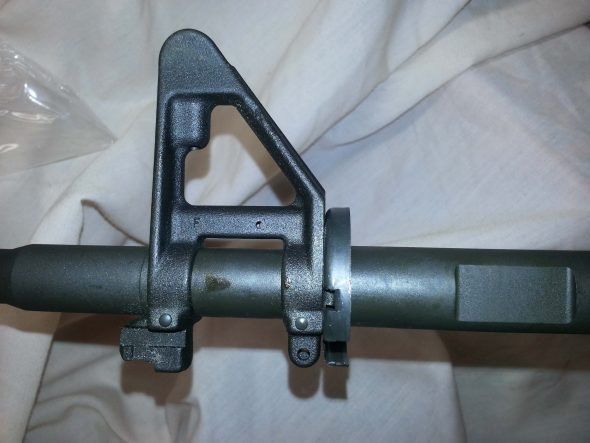 Maybe you have read on forum X, Y, or Z that a user states “Colt Socom barrels are incredibly accurate!”… or that “My Colt Socom barrel is more accurate than my other carbine barrel X.”

I know I have encountered many posters sharing their experience, though often without data… but nevertheless its become commonplace to accept the Socom series of barrels from COLT as quite accurate for a mil-spec, chrome lined offering. First off, what is a Colt Socom barrel? The Colt SOCOM barrel is a medium contour barrel which was produced to bridge a gap in the M4 Carbine’s ability to handle full auto fire. The thicker Socom profile handles longer strings of full auto fire than its skinny predecessor.

It’s been said that Colt’s assembly line for their mil and civilian customers is the same assembly line… meaning you’re getting the same M4 Carbine (sans fun switch) that our boys would be carrying in Afghanistan. SWEET! So why is the Socom barrel such a good shooting product? It’s not match grade anything, it is simply another workhorse barrel off the Colt assembly line. Is the accuracy a myth? No. It’s not.

Shooters  who own these barrels have noticed that the 14.5 SOCOM is shooting observably well, but often they don’t post any data to back up the claims. This is often frustrating when doing research. Who has the data? The ever popular Molon has done us all a favor and collected some data on the Colt SOCOM vs its Gov’t profile sibling. Visit his test and notes here. Take note that on page 2 he compares the SOCOM to two 16 inch m4 profile barrels which he noted performed basically the same as their 14.5 inch counterparts.

A Colt Socom barrel tested by Molon was capable of producing an 30 round average sub-MOA load with an extreme spread of .9 inches and a mean radius of .35.

Two 16 inch Colt Gov’t profile barrels tested with the same methods revealed no better than 1.5 MOA average between them and a 30 shot mean radius avg of .49.

Both used match ammunition. Both are Colt products. Both are chrome lined. So what gives?

The sine wave to be exact.

Each barrel “whips” as 50k + PSI violently pushes the projectile down the bore. How much flexion is present in the system is a combination of barrel thickness, barrel length, pressure of the load, bullet weight, and heat absorption. Rifling twist rate and bullet weight even play a part as the torque generated on the barrel plays its own note on the harmonics. Pressure goes from 50k-55k PSI to Atmosphere in just milliseconds. It’s no wonder barrels WHIP.

Your barrel is a hollow beam anchored at the receiver. As Teludyne Tech so eloquently puts it, “your barrel is a dynamic pressure vessel”. There is a pressure gradient starting at over 50k PSI at the chamber which rapidly drops as the bullet progresses down the bore. Once the bullet leaves the bore (uncorking), the pressure in the barrel drops to atmospheric pressure in an instant. The behavior of the barrel as these forces act upon it is known as barrel whip or barrel “harmonics”.

The bullet and powder also play a huge role here as well. Your barrel will behave (flex) differently with 55 grain M193 v.s. a 77 grain bullet and a slow burning powder.

Heat is also a factor. Rapid fire heats the steel, makes it more pliable, and causes it to expand. Do you have a barrel that walks as it heats up? Bingo. That’s yet another variable.

Powder, heat, pressure, projectile, all apply their own variable and as each load functions uniquely in a barrel as it “whips” in unique ways. Load A will cause the barrels harmonics to behave in one way, while load B causes yet another unique situation.

Add all that in with an imperfect projectile, and powders that aren’t loaded to 100 percent precision… is it any wonder that load x groups low and left, and load y groups high and right? They were both released at a different X, Y axis as the barrel moved through its low-frequency sine wave.

Does anyone know where the hottest area of the bore on a m16 is? Anyone? It’s four to six inches in front of the  bolt face (“External Barrel Temperatures of the M16A1 Rifle“). If this is the hottest area of a barrel, a government profile barrel seems to make less sense. The Government barrel is skinny where it is hottest, and has a heavier end which effectively adds a weight to the end of our beam. I have started eyeing my Gov’t profile barrels suspiciously. Oh, it’s attractive… On the surface they are very sexy, but deep down they have some real issues. There is a reason SPR profile is considered an accurate profile and there is a reason no one sells a “match” Gov’t profile barrel that is winning matches.

“Analysis of M16A2 Rifle Characteristics and Recommended Improvements.” While some consider the above document a hit-piece against the M16A2, it does make some points that should be considered.

The Colt Socom barrel appears to occupy an area of strength to weight in a unique sweet spot. The barrel is thicker where the pressure is greater. It is thicker where the heat is greater. It is thicker where it matters. When you increase the stiffness of the hottest, highest pressure area of the barrel, you are going to reduce whip and promote more consistent barrel harmonics. The Colt Socom barrel does just that. It likely reduces whip substantially enough to shave off 1/2 a minute vs its Gov’t profile sisters. The sine wave, if we had a means to compare the two profiles side by side, would likely be more subtle compared to that of a standard gov’t profile barrel. Less whip and greater consistency from round to round, load to load. It’s a short, stiff barrel.

That’s 28% more material to soak up heat and maintain rigidity. If the diameter truly is the only variable, then that’s something amazing to consider. Think of how little the bore matters in this scenario. It’s a chrome lined SUB MOA bore as shown by a 30 round composite grouping. That’s statistically significant. Colt doesn’t hand lap anything off that line, and yet by just increasing the thickness under the hand-guards, we have acquired a sub-moa capable weapon.

So are Colt Socom barrels more accurate than the average bore? Most likely, they are. Is it because Colt Magic? No. I mean, it could be, I don’t work there but I wouldn’t bet money on it. As a byproduct of the design, the SOCOM is an HBAR by another name. The increase in material is a direct increase in material strength and it likely benefits from superior barrel harmonics over its Gov’t profile sibling. Consider a medium profile as a good compromise on mechanical accuracy vs weight. Consider HBAR profiles for pure mechanical accuracy. While barrel diameter doesn’t guarantee accuracy (for example, a poorly cut crown can undo all the benefits of a stiff barrel), they do add an element of consistency to your barrels harmonics and suppressed some negative effects of heating up and cooling down.

If you are looking for a Colt SOCOM, Brownells has them available here.

I would like to recognize the book Modern Advancements in Long Range Shooting Vol. II as an excellent resource for understanding barrel behavior.