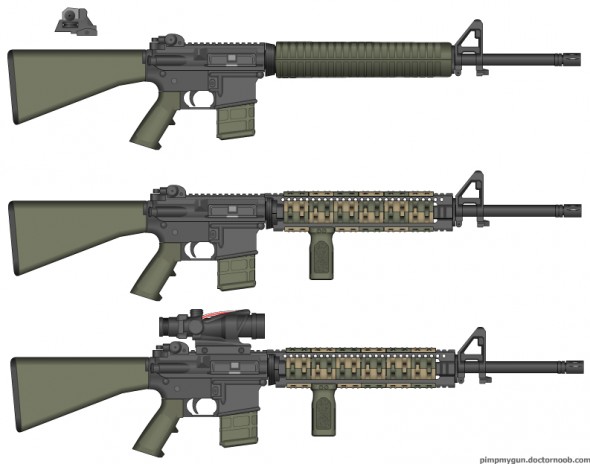 If you are trying to identify options in building an AR15 you may or may not know about pimp my gun.

I have been using this for some time to roadmap certain AR15 builds.

Here is the latest project:

It is a roadmap for my rifle build.

The first stage is pretty simple. Standard 20 inch AR15 with government profile barrel and green furniture. An A1 length stock has been chosen for this build and I would suggest that the A1 stock be chosen over the A2 for a variety of reasons. The primary problem is that the A2 stock is too long for some people while the A1 can be used by most people comfortably. I intend to teach others how to shoot with this rifle (as well as learning myself) so for my purposes I need something that will fit a variety of shooters. Twenty round magazines are easier to use when prone than thirty rounders. When I shoot prone with my carbine, the thirty round magazine becomes a monopod. Not necessarily a bad thing, but I am not interested in using a thirty round magazine as a shooting aid.

Stage 2 includes the addition of a free floated rail. Free floating the barrel will supposedly increase the accuracy of the weapon… but to what degree I do not know. Again by freeing the barrel of the influence of my hand through the handguards and whatever other torque I could potentially apply I can reduce outside factors that will affect the harmonics of the barrel. The fore-grip and sling mounts are probably the only accessories the rail will see for the immediate future. Some rails advertise that they weigh less than the plastic A2 hand-guards which is quite interesting. One of the benefits of the M16 is that when it was introduced it weighed significantly less than the wood and steel battle rifles of the time. Reducing the rifle’s weight appeals to me.

Stage 3 is simply the ACOG. This is after I have gained enough skill with the basics to warrant obtaining such a fine scope.

I haven’t really been able to decide upon which rear sight I want to use with the rifle. It obviously has to be adjustable. Perhaps a KAC micro or a LMT chopped handle.