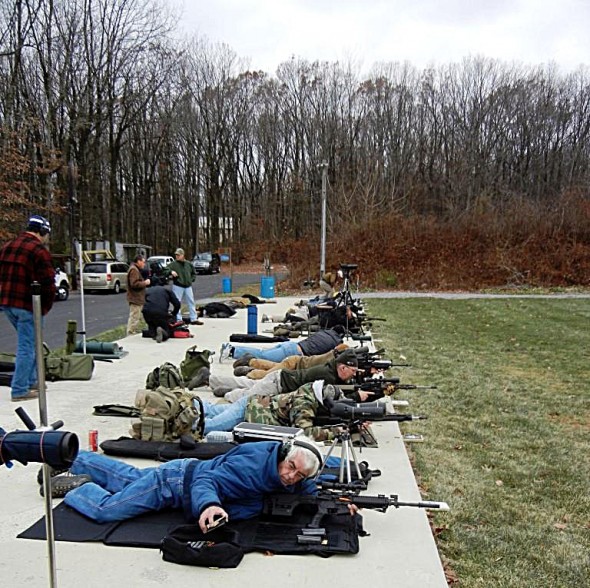 You’ve probably seen people doing this type of shooting. It’s pretty easy to spot. A purpose built shooting coat, sling, and other devices that might seem pretty unusual to a tactical shooter, and the rifles you’ve seen them shooting might look a bit strange as well.

You’ve got the “Match Rifle,” which looks like an AR15 turned into some kind of a spacegun…

So, here you are with a scoped AR type or bolt action rifle that deviates so far from the rules of what define a “Match” or “Service” rifle that you’d think there’s no WAY you could participate.

If that’s the position you’ve taken, I am pleased to be the first person to call you DEAD WRONG.

3.3.2 NRA Any Sight Match Rifle/Tactical Rifle—
Same as NRA
Match Rifle Rule 3.3 except there is no restriction as to sights. The following
restrictions will apply:
(a)
No person firing and any sight rifle under 3.3.2 will be allowed to
compete with any other group of shooters who are also firing. A
competitor using an any sight rifle under Rule 3.3.2 will only be
eligible for awards in their own division.
(b)
Bipods may be attached but not utilized. Ammunition will be restricted
to no larger than .35 caliber.
(c)
Competitors may use a service rifle equipped with optic sights to
compete under this rule. Competitors using service rifles described
in Rules 3.1(c) and 3.1(d) may remove the carry handle to allow
mounting of the optic sight.

Here’s the deal – There’s a class of match rifle already built into the rules that permits tactical style rifles with optical sights. The thing is, it was poorly defined, and not very well exercised or attended… until now.

Some of the more experienced high power shooters at New Holland Rifle and Pistol Club have embarked on a quest to fill in those gaps, and breathe life into a class of rifle that hasn’t traditionally participated in that sport, but happens to exist ABSOLUTELY EVERYWHERE.

These guys put together a clinic that explained the different rifle classes of the sport, and where a scoped, tactical type rifle would fit in.

Next, equipment was discussed. They had several examples of different competition rifles there (the traditional kind). Also discussed were shooting coats, and what they provide, different types of slings, and the way the equipment in a position is set up.

They went over the three different positions that are used. Standing, Sitting, and Prone. How the equipment works together is actually really cool. One of the instructors described the shooter’s role as “trying to ‘become’ the bipod.” Check.

The instructor suited up, donning the shooting coat and demonstrating each of the three positions while another instructor pointed out some of the important points of each one.

They had a significant block of instruction on marksmanship, going over the fundamentals. Some in the class had significant shooting experience while others were relatively new. Even if you know what you’re doing behind a trigger; a refresher on BRM is always a good idea if you know what’s good for you.

“Every single one of these rifles is eligible to come shoot the matches here.”

There were ALL kinds of rigs there; my own, a DMR type gun with a Nightforce 2.5-10×32, 18” WOA barrel, and a gemtech sandstorm suppressor, an M1-A, a Noveske DMR gun with a larger scope on it, and everything else, including a couple bolt guns, and a 16” M4gery.

We shot from each of the positions, including both slow fire (where you single load the rifle) and rapid fire (firing from mags with a mandatory reload). They even had us shoot timed strings that exactly mimic the match course of fire. It was all done on official targets that were properly scaled for use at 100Y.

A trip downrange to look at the targets confirmed that there’s a lot of room for improvement. The tactical long range comps and DMR matches I regularly shoot usually have position shooting in them. I have always done ‘well’ in those stages but the accuracy demand in this sport is a lot higher.

So, you can participate with the rifle you’ve got. But why would you?

There are a few good reasons to take a look at national match shooting.

Want to give it a try?

If you are interested, browse over to http://usrifleteams.com. This is the best overall source of information. If you post there, you will be able to find a program near you.

If you happen to be around Pennsylvania/NJ, the New Holland Rifle and Pistol Club website is at http://nhrpc.org. You will be able to contact the high power crew there and they will be more than happy to give you some good advice on getting started and on obtaining the few pieces of kit you will need. Maybe I will see you on the firing line!

← I Am Not a 1 MOA Shooter… and I Don’t Have To Be.
Studying the DMR: Unknown Distances →
Scroll Up