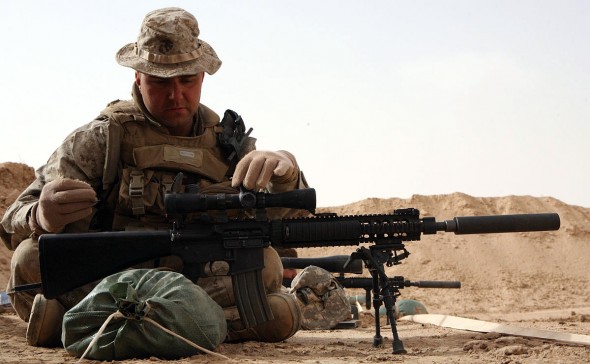 So which one is best? This is not a compare and contrast. That has been done a thousand times. No need to dig deep into the common talking points as this article is not a primer… It’s a collection of thoughts that look into each system and why you should choose one over the other.

I personally believe that a rifleman should cultivate skills that promote speed on target… and that in any given scenario a rifleman may encounter (be it hunting, self-defense, or SHTF) he/she will be presented with a target at unknown distance with the variables of time, stress, and environment working against him/her. It’s important that we cultivate shooters who can respond from point-blank to 600 yards with accurate, timely fire. Can a rifleman accomplish this with a 4-14 mil/mil scope? Of course. Can he accomplish this with a ACOG? Of course. Both can give excellent results with an accomplished shooter. The choice between the mil system over the BDC system comes down to a series of compromises. Let’s touch on these topics:

You got kids? Get to the range once in a blue moon? Compete? Or are you single with a disposable income and plenty of time to hit up courses and shoot? The practical aspects of life should also drive your gear selection. Me? I am the former. With a growing family I have less time to shoot, less time to compete, and have to consider gear in a different way. If your time is precious, a fixed BDC system may be the best option for you. Having a bullet and reticle matched system makes sense if you don’t have lots of time for the deeper learning curve of the mil system. A good BDC reticle will have several tools on board to allow you to range, hold for wind, and to match your drop. Are they perfect? No, they are limited… but in some cases so is our time. Having the ability to pick up a rifle after months and hit targets from 0-700 yards with a single load / optic is no joke… but do the limitations of BDC impair the rifleman?

The ACSS system on the now discontinued PAC4X

Naysayers will come up with some very good counter-points. The mil-dot optic and variants are like a toolbox for the shooter. The ability to semi-precisely range a target, and then dial in the drop and wind drastically increase hit probability. At extended distance, range error calculation and wind calls are the biggest variables a shooter must solve. It’s absolutely true, if you can keep up proficiency with the mil-dot system, then you have many advantages over a BDC rifleman as far as first round hit. Add a range finder and up goes your percentage. Add a kestrel and up goes your percentage. Add a… Wait. Do you see where I am going here? Does a rifleman really have time for that?

The perfect example of a rifleman in practice would be my relative Chris Hernandez. You can read his stories on his own blog at www.chrishernandezauthor.com and if you dig deep enough you can find his experience with the DMR to be a bit eye-opening.

Second thing: For most modern combat, 300 meters is plenty far. I carried an M14EBR (Enhanced Battle Rifle) in Afghanistan, and I could consistently hit a torso-sized rock at 900 meters – at the range, with perfect weather conditions, a good firing position, on a stationary target at a known distance. In combat, with extreme heat or cold, unknown distances, hasty firing positions, adrenaline and moving targets, plus little annoyances like incoming fire, I would have been ecstatic to smoke a mofo at 200 meters. – Chris H.

I must have quizzed good old Chris on his experience with the DMR a thousand times by now. The training he received with a M16A4 + RCO stateside and his experience of carrying a M14 EBR overseas lead me to understand the apparent futility of dialing dope or accurate ranging in combat. Chris had a very capable rifle, excellent training, and he was unable to use the extended capabilities the .308 offered due to the nature of his combat experience. A shifty enemy… moving, hiding, and presenting themselves for a short period of time at unknown distances removed the utility of his Leupold Mil-Dot scope and his traditional marksmanship training.

The Marines Still Choose to Rock a Mil-Dot on their German Made DMR. Of course they do.

So while the mil-dot gives you more tools and more potential for precision fire, it also requires you to take more time to set up your position, range, and fire upon said target. It requires more training to maintain proficiency. It’s a Swiss army knife, but many of the tools stay folded during the chaos of combat. Ergo, I believe that fast, though imperfect, ranging from a BDC style optic is more than adequate for a rifleman. It removes SOME range error from your shooting, and that may be enough to ensure speed on target and increase your chance of a hit. Couple a good BDC optic with a 20 inch gun and you will reduce the penalty from range estimation error even further. Remember, velocity soaks up ranging error by having a flatter trajectory. If you had a laser gun all ranging error would be eliminated.

So with range/training time and real world practicality as our litmus test, I would say most shooters would be better suited for a fixed BDC optic and training with a common, easy to procure projectile. Your limitations in load selection are a bummer, but proficiency with one basic platform supersedes inefficiency with the tools you have not mastered. You can reload for a BDC, you just have to do a lot more experimenting.

Optics with multiple BDC tools etched into the reticle are ideal. They offer more than one way to quickly make range calls, some assist with holds for wind, and they still offer speed and utility.

Right now I have my eye on a 4x ACSS ACOG. It has several tools to range, is set up for common ammunition (62 grain M855 from a 20 inch gun) and has wind holds.

I find many ACOG reticles to be too small and hard to find in adverse lighting conditions, but that’s just another compromise against the other excellent features: a BDC with wind holds brings value back to the table.

Mil-dots have their place, and hunters may find them to be the proper tool for stalking and taking game at extended distances. A grazing animal removes the “return fire” variable and permits a bit more time to set up a shot vs someone who’s trying *not* to get shot. So your perceived use defines the value of one system over the other.

Right now I am working towards my goal of assembling my DMR/Competition rifle. I will be utilizing irons until I can afford to equip the ACSS ACOG. The reticle looks a little small and easily lost in dark to light shooting conditions, but compromises have to be made with every optic system.

The argument of which is better Mil vs BDC can be settled with the following question: how much time and money do you have to master one over the other? I would rather range and fire upon a distant target with semi-precise ranging then wait for the opportunity to precisely range and fire upon a target and never get to take the shot.

Familiarize yourself with both tools, but objectively examine your situation and choose the one that will make you a more effective rifleman.

← The BCM QRF Review: Can Quadrails Still Rock?
Considerations for Building a DMR Part 1 →
Scroll Up