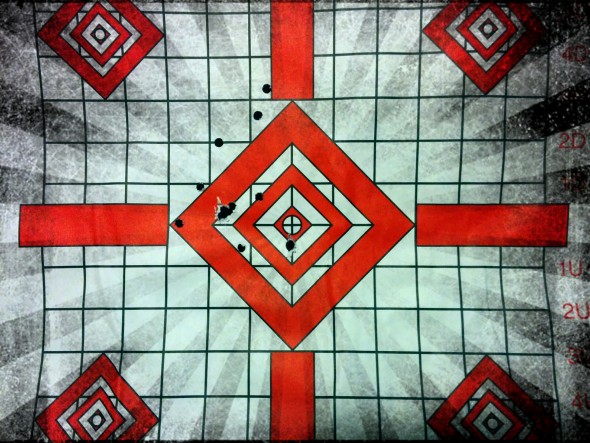 Do you tire of internet pissing matches over 1 MOA “shooters”? I know I do.

I was inspired to make this post by a thread on AR15.com known as the 1 MOA all day challenge. This thread was created to call out shooters who claim to be 1 MOA capable shooters and to test your might against an often repeated standard of accuracy…

The thread asks shooters to post 5, 5 shot groups with no sleds, shooting jackets, or total rifle supports allowed. You can use a bipod, sling support, and are allowed a front sandbag rest.

As a practical standard, 1 MOA is impractical. Why?

The fundamental shooting positions are an important first step in becoming a great shooter. From the three “standard” field positions, ( unsupported standing, sitting, and prone) we can extract out our efforts at pure, accuracy focused, fundamentals of marksmanship. Mastery of these unsupported positions shows that you have an understanding of mental focus, breathing control, sight alignment, and trigger discipline. That’s it.

This is important as mastery of the three field positions builds on your abilities when you have extra tools such as a bipod, or a barrier to shoot off of, or sandbags, or an optic.

When you add the mastery of these positions with a bipod, scope, accurate ammo, a decent barrel, and a bench then yes, you can achieve 1 MOA if you want… Great. Wow. You have mastered THE BASICS at 100 yards to shoot a tiny group. Practical if your hunting prairie dogs, but it shouldn’t be the standard everyone judges themselves by and we will get to that in a minute.

If that’s your skill and equipment level and that’s how spend your range sessions then you have mastered the basics in an environment as controlled as we can get in an outdoor setting. The wind at 50 and 100 yards doesn’t really have enough time to push you off target, the rifle is supported enough that your shots are smooth and steady. Excellent. If you don’t do much more than this,  how will you expand on your mastery of the fundamentals?

You have to put your mastery in a practical context, and this can take many forms:

Distance and weather adds variables, as does shooting from positions other than the three basic field positions, and shooting against adrenaline, a timer, your heartbeat, and tired muscles are just a few variables we can add into our shooting. High-Power, 3 gun, tactical competitions, long range hunting, professional gun instruction, and directed self practice are all avenues where you can extrapolate your abilities and examine your true skill level with the rifle.

So we have impractical conditions under which we can shoot 1 MOA, but what about the gun?

I can tell you that you don’t need to be a 1 MOA shooter to develop your marksmanship and skills to the level of a rifleman. I am not a 1 MOA shooter, and how can I be? All my rifles are probably incapable of 1 MOA. They may be close, but the equipment I have thus far is not match grade and the iron sights on my “national match” gun are USGI irons. I took that gun to 600 yards and it sure as hell was the cheapest, ugliest, and non-match weapon on the line.

My High-Power gun… not national match, but it doesn’t need to be… No… It doesn’t *want* to be.

A 20 inch HBAR national match AR15 with national match hooded sights is made to do one thing really well… help its owner win NRA Service Rifle competitions. I will never come in first place with my Fugly rifle, but it’s a practical weapon that can be used in every aspect of my goals. This gun will go to 2 gun competitions, it will be involved in directed self practice, and it can easily be used in self-defense. This is a practical weapon. It may be out of date, too long, or whatever else the internet wants to piss and moan about instead of shooting, but this rifle can do it all.

So what about other 1 MOA or sub MOA weapons we see on forums? Don’t judge your abilities (or your gear) by the targets Mark Larue posts online with his “more expensive than my first car” OBR rifle. If you want to be a rifleman, you use EXACTLY what you have RIGHT NOW to develop the skills you need to absolutely deliver lead down range with accuracy.

You shoot 3 inch groups at 100 yards? Sounds to me like your accurate enough to hit a man sized target at 500 yards.

Most likely the weapon you have right now is MORE THAN CAPABLE of helping you develop the skills of marksmanship and it will absolutely deliver lead far downrange with authority if you command it to.

You want to be a rifleman? Practice with what you have in a variety of avenues and under differing conditions. Bam. Done. Now your way more legit than the 1 MOA internet wankers who never leave the bench.