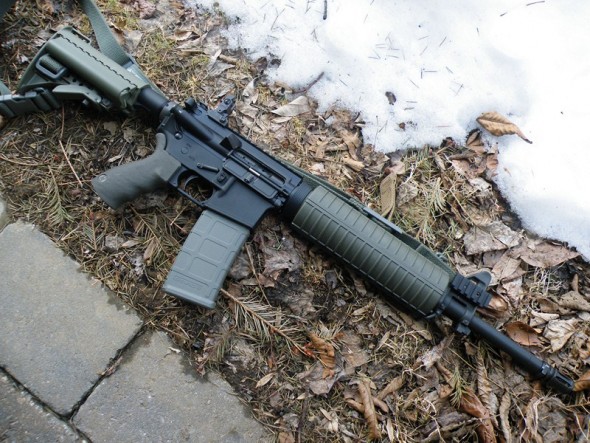 Many people I meet at the range claim they cannot shoot, or they will express their lack of ability to shoot at longer ranges. One such person I met was also equipped with a ACOG on his carbine. Certainly their weapon has the ability, and the ACOG certainly helps the shooter… but why would he make such an expression to me? Has he simply never tried to push the weapon past 100 yards or does his technique genuinely suck? Who knows?

As an aficionado of Americas rifle, the AR15, I find it somewhat disheartening that our collective brothers in arms don’t attempt to push their equipment and their skills to the limit.   I struck that out because recently I was able to push my rifle to 600 yards with success. I started this blog with a 100 yard skill set. My practice has started to show its results on my skills. Our Ar15’s are fantastic pieces of equipment and yet we hamstring them to 100 yard ranges.

In our community of AR15 owners, the term RIFLEMAN makes us all think of grandpa and his Garand or someone who rails against modern optics. A modern rifleman should look past those ideas and realize what makes a rifleman a shooter is embracing new techniques and equipment to better realize his/her rifle’s capabilities as well as our own capabilities as a shooter.

Using One Gun… All the Time

A Rifleman knows his weapon from years (or decades) of friendship. A man can be absolutely deadly with a 30-30 he has owned and shot the hell out of his entire life. He is something to be feared if angered. He is someone you would want on your side in a fight. A friend’s father once told me to “fear the man who only has one gun”. I have become a better shooter since I have whittled away my AR15 collection to two rifles. Since I have stopped spending money upgrading stuff I have spent more on ammo and more time shooting. Since I have taken my rifle to competitions I know how it runs when it is pushed hard. I am becoming a better shooter by shooting one rifle 90% of the time when I hit the range. As much as I want an ACOG or a FF rail why bother? So far the rifle has not limited my capabilities, but I have limited the rifle’s capabilities with my lack of skill.

A Rifleman you should have no issue with modern equipment. The tools of any job advance and we must keep up with those advancements. IF modern optics create a great benefit for the user then we should adopt them. An ACOG gives an advantage that lack of skill could totally squander. Inversely, the handicap of iron sights can be washed away by someone who has great skill with his weapon. Whatever method of acquiring the target you choose, please pick one you trust and practice with it often. If it is a removable optic, don’t take it on and off between weapons. Once you have mastered the optic of choice LEAVE IT ALONE. Once your gun is doing its job well, don’t make changes to it. Take it from me, for every time I make a change it always screws with me on range day.

A Rifleman’s skill with his/her rifle coupled with his knowledge of ballistics is what makes him an effective rifleman. It is our knowledge of the ballistics behind our 5.56×45 and the application of that knowledge that will elevate us as shooters. As I have grown comfortable with my rifle and my zero, I have also grown comfortable with one type of ammo. I shoot 55 grain ammo all time. As cool as 75-grain stuff is, I would have to re-learn everything. I am confident that I can hit what I see with 55 grain stuff and inserting a new and expensive type of ammo will be of no benefit to me. I am far more effective with ammo I can afford to practice with often than I am using high dollar stuff and hitting the range less often.

I can’t tell you how many “little things” have popped up from casual competition that I have learned to now avoid. Loc-tite is my friend now. I don’t touch *Anything* before a shoot. I know where I like my gear, and where it does not belong. To compete is to compare yourself against others… and you will quickly learn that your skills need constant work to stay a competitor. This will keep you and your rifle sharp. When I hit the range I try to focus on certain goals. It is important to focus range time on correcting deficiencies. Examine where you are lacking and tackle these areas. Devote ONE magazine to working on your skills, THEN go and have fun with your rifle. Leaving the range should leave you feeling satisfied that you learned something.

Once you know your gun, once you understand your bullet and trajectory, and once you reduce your shooting errors, then you will realize just how much you and your AR15 can do. Please don’t shortchange yourself. Everyone with one good eye and 20/20 corrected vision + a working hand can hit targets as far as the eye can see. You owe it to our founding fathers to push yourself and America’s rifle to the edge of ability, for the American Rifleman has long proven to be a freedom loving and determined man. This is America’s martial art. To that guy I met at the range long ago… Your limit to your ability is all in your head… you had two good eyes, two good arms, and an AR15.

← The Rifleman Part 1: The Shooter
The A2 is still slick →
Scroll Up