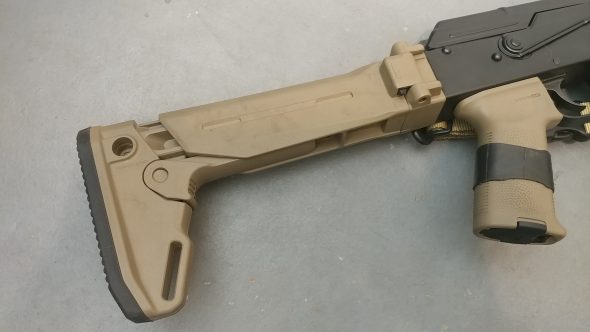 Don’t have this? NO FOLD FOR YOU COMRADE.

The Zhukov is typical Magpul quality polymer capped off with a rubber butplate. There are multiple sling attachment points, and a large user friendly latch to easily fold the stock. The rear features a very minimalist pivot latch which is hard to spot. This latch allows you to adjust the length of pull from 12.2 to 14.8 inches fully extended. For reference, the M16 A2 buttstock measures 13.5 inches. If you need a Zhukov at full extension to shoot comfortably, I would suggest you keep a lookout for a guy named David. Wear a helmet. The Zhukov has the appearance and feel of a well engineered Magpul product. How does it do on the range?

Initial impression is that it feels less ergonomic than a standard AK stock. What makes the Zhukov stock different than a regular AK is the angle of the stock. With a regular AK stock, it has a downward slant to it that raises the rifle so you don’t have to smash your face into the stock as hard to get a good sight picture. With the Zhukov stock, it’s straight like an AR15 stock, and with the sights being so low on the AK, you have to smash you face into the stock to get a proper sight picture. Doing so results in every time you pull the trigger, you get punched in the cheek by a piece of hard plastic.

Notice the different angle of the stocks? My face does.

My other concern with the stock is the lock up. When it’s folded, it’s just tension locked in place, it can still move but it’s solid enough to hold it closed. I never plan on shooting stock folded so I like how easy it is to open… but the problem is when it’s not folded. It’s just a plastic tab holding it in place and even when brand new, I could smack it to the closed position without depressing the button. That makes me worried that over time it will get weaker and weaker and I go to shoulder it, it will just fold on me. (Editor’s Note: I have thrown my Zhukov equipped rifle when testing gear and also found the stock to fold like a cheap suit when it comes in contact with tierra firma. – Lothaen)

The stock is partially extended but it took a while to get it there.

The Zhukov also adjust for length of pull. Despite the issues, it’s still handy to have a folding stock equipped for transport, and one would think the adjustable length of pull would sweeten the deal… but it also has a user-unfriendly length of pull. By unfriendly I mean it’s hard to use. You go to pull the stock 1 notch, it’s so stiff you end up pulling it out all the way. Your options for adjustments are fully extended or fully collapsed if you’re not very delicate on adjustments. It is quite stiff.

Overall, the stock is a great idea from Magpul, but I just don’t think it works very well. Maybe on a 74 the Zhukov stock might be a little nicer to your cheekbone. You might be able to put a muzzle brake on your gun to help with the recoil but that’s about it for a 47 variant rifle. The Zhukov has a weak lock up and it’s very hard to adjust the length of pull. As much as I wanted to like this stock, I cannot get it off my gun fast enough. – D.S.