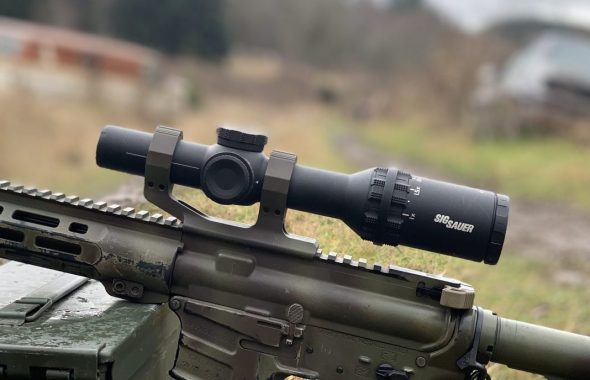 The SigTango6T is the military’s new 1-6 power optic for DMR and SOCOM. I have been lucky enough to receive one for review and I can say that I am very impressed. It has everything you can ask for in a 1-6 power scope, especially for a scope with a military pedigree. If I were asked to design a scope that has all the features I think I would need, this is it and then some. Let’s take a look at the new issue optic and see how it stacks up:

The Tango 6 works great as a DMR optic. The low profile turrets don’t snag on anything!

What’s In the Box:

When this optic arrived, it came in a very plain cardboard box that said “Sig Sauer”… I expected it to have the scope, a manual, and a cleaning cloth. To my surprise, it came with the scope, a manual, a Sig branded cleaning pen, and a throw lever. Upon seeing that I was super excited with the value of the kit. Normally you get a china cloth and the throw lever is another purchase. The fact that Sig includes all the extras in their Tango6T line of scopes makes other companies look bad. With almost any 1-6 scope, adjusting the magnification ring almost requires a throw lever because it’s so stiff… so Sig just threw it in instead of making a customer who just spent over $1,000 buy an additional $70ish part. Good on Sig, that’s a small but great way to take care of their customers. The cleaning pen is another nice touch as I always lose my cloths. Having a pen with a pocket clip will keep it secure in my range bag, again, another small detail Sig got right.

This is a very feature-rich scope and all of the features are, in my opinion, incredibly well thought out. It features capped turrets with .2 mil adjustments, the adjustments are very tactile and audible. After zeroing the turret is lifted off and re-set it to zero for the mil markings. The magnification adjustment has two fiber optic dots that tell you what magnification you are on from behind the gun, very nice.

.2 mrad clicks and an off position between each illumination setting

The power knob has an off position between every brightness adjustment. I prefer a hard off so that way if I’m driving to the range and back, I don’t use an hour of battery, but if I forget to turn it off, it will save a lot of battery life. My advice, find 2 positions that you like the most and set it in between. Turn it on in either direction and you will have your brightness just where you want it when you turn it on. The expected battery life on this scope at setting 5 or 6 is about 100 hours of continuous use.  The exit pupil of the scope is threaded on the inside… If you so choose, you can put a kill flash or other accessory on it. The front of the optic has a little beveled design on it also, so it’s a nice change from just the end of a tube, subtle but looks good. Oh and I almost forgot to mention, it is covered by Sig’s Unlimited lifetime guarantee!

The magnification knob lets you know what power you’re at with the 2 green fiber optics. Very easy to see at any time of the day

The Tango6 has a Field Of View of 105.8 ft at 100 yards on 1x and 17.7 ft at 100 yards on 6x. The body of the optic has a seemingly random line through it, but that line has a purpose. This scope is being paired in some contracts with the ALPHA4 scope mount. The ALPHA4’s rings are split horizontally, unlike my Aero mount which is vertical ring setup. However, any scope mount that comes apart as a top and bottom piece will work with the auto level line. All you have to do is line the line up with the break in the scope mount and it will be level. That line makes leveling your scope quick and easy! It is IPX7 waterproof rated which means it’s submersible at 1 meter for 30 minutes. And with 4.1 inches of eye relief, it’s very easy to get behind this optic and run your gun. Weight is 22 oz so its got some heft similar to that of the Vortex Razor.

The auto level line works great and the bezel on the end of the scope adds a nice, subtle look!

UPDATE:   Since the initial writing of this article, I have received a Midwest Industries QD scope mount to review. Since it is a two piece horizontal scope mount, I was able to take advantage of the Auto Leveling feature. And I am happy to report, the auto level line works tremendously! For being such a simple feature, I am surprised more companies don’t add this to their scopes. Thank you Sig engineers!

Tango 6(T) optic use in the Military

So to start this section off, I need to preface this by saying that there are two different models of the Tango adopted for two different purposes. One of them is the Tango6 and the other is the Tango6T which was designated by the army. They both fall under Tango6T on Sig’s website, they’re just set up with different reticle options and focal planes. The Tango6 is the First Focal Plane version that is being put on Army Squad Designated Marksman Rifles, and the army is adding more Designated Marksman to the squads (from what I can tell)  to increase squad lethality. The Tango6T is the Second Focal Plane version and was selected by US SOCOM for their DMR’s and general use. The DMR which is the HK G28 based rifle is a CSASS (Compact Semi-Automatic Sniper System) a shorter and more maneuverable rifle for forces to engage in the middle ground between the M4 platform and a full-on sniper platform. I think both scopes are going on a 308/7.62×51 caliber rifle, and I believe they are both the HK G28. The DMR will be able to engage targets between 300 and 600 yards and have the ability to engage up close by easily switching to 1x magnification.

While my optic is almost identical to the one the military uses, there are a few small differences. The military is using the FDE version of the optic and they are using a custom reticle made to the militaries specifications. That’s where the differences stop. My optic and the optic being used by the military are made from the same material with the same craftsmanship and built to the same standards.

The FDE version of the TANGO6T

This is my first experience with a first focal plane optic and I am liking it. For those of you that don’t know what the difference is, I will explain it as simply as I can but look online for further explanations. A first focal plane optic, the reticle starts very small… and in this case, when illuminated, it looks like a red dot. When you increase magnification you will see more detail because you’re zooming in on the reticle. Your BDC holds and the other details in the reticle increase in size and become clear. Your BDC holds are good at any magnification as well. On a second focal plane, the reticle stays the same size through all magnifications levels and you just zoom in on the target… the BDC marks are only good on the magnification you zeroed your rifle on, but the center aiming point is good on any magnification.

Reticle at 1x and about 5 or 6 illumination setting

Illumination at about 9 power and 6x magnification. The Reticle is much brighter in real life.

Sig has been around as a firearms manufacturer since the mid-late 1800s. They started making muskets and then moved to make phenomenal handguns such as the P49 in 1949 which gave way to the P210 for the Swiss army and eventually the P220 and P230. By 1980 Sig moved to America because we like our guns and the company took off. After moving to America they started to manufacture the P226 and P228. Did I forget to mention that they now make the M17 and M18 for the US Military? Sig has a great track record of making high-quality products, and I like what Sig is doing. They’re trying to be a one-stop shop for anything gun related and they’re successful. They now make darn near everything. They make firearms and optics obviously, they also have their line of ammunition, range finders, air guns, airsoft guns, magazines, and even suppressors. My experience with Sig products isn’t the most extensive, I have a Romeo 5 I am reviewing, I have one of their rangefinders and their Tango6T 1-6 scope featured in this article… but you don’t become one of the best firearms companies in the world for not being a good company. When you buy from Sig you do pay for the name, but you also get what you pay for, and in my experience, Sig doesn’t let you down. So buy from Sig with full confidence that what you are about to buy will compete with anything in its price point.

I emailed Sig a couple of questions about their scope and this is directly from them. I asked how they tested the durability, what separates this scope from others that were submitted to the military, and what small features were in this scope that they were proud of. This is how they responded.

“The TANGO6T 1-6x is our flagship riflescope assembled right here in our Wilsonville, Oregon facility.  Originally intended to be a military grade product, the TANGO6T complies with all applicable sections of MIL-STD-810G.  Made from 6061-T6 aluminum and argon purged, the TANGO6T is fully resistant to water immersion, humidity, temperature extremes, fog resistance, rough handling, corrosive environments, and live fire regiments.  In addition to the military standard testing, we expose all our products to a battery of use-based tests developed over years of manufacturing experience. Aside from laboratory testing and use tests, we feel it’s best to simulate actual use environments as closely as possible… so we shoot A LOT!

It’s our opinion that a riflescope has two core missions:  It must be accurate and at must allow users to clearly observe whatever their target or environment may be.  Anything that negatively impacts either of those key missions is unacceptable. To accomplish these missions for the Army, we engineered an advanced first focal plane (FFP) reticle with our HELLFIRE illumination.  This level of illumination intensity in a FFP low powered variable optic (LPVO) gives users the unique ability to effectively engage close and medium range targets in bright daylight. Additionally, the other reticle features provide users with the ability to accurately measure, range estimate, and direct fire towards medium and long-range targets.”

Part 2 will include the results of use, how accurate the reticle is, my take on the glass quality, and how durable this scope is… if there is anything else you guys want me to go into more detail of, or test within reason, let me know in the comments below and I will make sure it happens.

Disclaimer: Sig sent this optic for T&E To D.S. a writer at thenewrifleman.com. Thenewrifleman has no financial relationship with Sig Sauer or any of its subsidiaries. Look for part 2 soon! If you want to check out the Tango6T head over to brownells.com