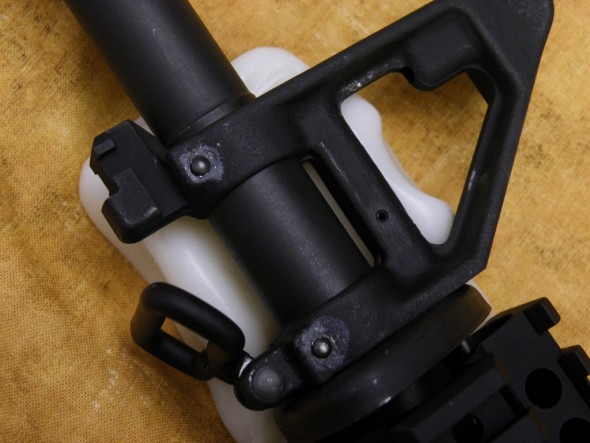 It’s a competitive market. Your choice for barrel companies has expanded exponentially since the AWB sunset. Who do you give your money to? We obviously have different shooting goals in mind, but a big part of the popularity of the AR belies its abilities as a do all rifle. The match 16 inch barrel is at home on the target range as it is capable of defending you and your loved ones in times of duress. For a long time the military has required a tough, chrome lined, 5.56 nato chambered rifle to ensure barrel longevity and reliability in combat conditions. For a long time, the civilian market has usurped the capabilities of traditional mil-spec barrels.

Mil Spec Barrels are so Blasé… ?

Let’s break down the problem. The Mil Spec barrel is capable of 1.5-2.0 minutes of angle and is built from tough steel to make sure it survives high volume fire and gives uncle sam a good use out of his money. The problem is that Mil-Spec barrels are not quite pertinent to civilians who may put several thousands down the pipe a year, and almost none in full automatic fire. As a civilian, the quality vs price of mil-spec barrels has been skewed by any number of barrel manufacturers who have produced low-cost, reliable, and very accurate barrels compared to the more expensive “better than mil-spec” cold hammer forged counterparts. Retailing at a whopping $289 for a naked DD barrel, and slapping you in the face at $300 plus dollars for a BCM pipe (with no gas tube, no gas block, nothing) it begs to question weather “mil-spec” or other high-end 5.56 “combat worthy” barrels are actually worth it to the civilian shooter.

Here is a very good test done by MOLON at AR15.com. It highlights a 14.5 inch BCM barrel that retails for around $309 dollars. In this test, we see that the BCM barrel has some interesting groupings in that several shots are tight and touching, while others go wild. It all boils down to a 1.5-2 MOA barrel. People in the thread are taken back by the price for performance. In all honesty, the barrels accuracy is acceptable and certainly meets the militaries specs. Surely you can defend yourself with that barrel, and it’s a CHF barrel from a well respected manufacturer of solid rifles. It’s even capable of hitting a man sized target at 500+ yards. So what’s wrong? The civilian market has given us higher expectations at a lower cost, that’s what’s the matter.

In this current marketplace, you can find many barrel assemblies whose manufacturers guarantee 1 MOA or less in accuracy. In this marketplace, you can find quality barrels from $120 to $235 dollars with gas blocks installed and accuracy performance that meets or exceeds the mil-spec criteria. The question is, are these cheaper barrels “combat” worthy? After all, that’s why you would buy a BCM, because you want a no shit rifle that’s going to work. Right? Don’t we all?

The problem is, as civilians, we follow the mil-spec mantra and have done so for a long time. Now that the war on terror has slowed down, manufacturers have turned towards the civilian markplace by offering very unique, designer components and quality components that are affordable for the working man. We all want a combat ready rifle. The reality is that we won’t be capable of abusing a barrel like the military can. We don’t need 5.56 chambered chrome lined, CHF barrels for a reliable weapon. We have many reliable and accurate barrels chambered in .223 Wylde which is in many ways superior for civilian use over 5.56; it reduces the long throat and lets the projectile engage the rifling sooner and in a more consistent manner. It certainly isn’t mil-spec, but for civilians it’s a smarter choice with accuracy benefits. We also have Melonite which has been part of the drive in reducing barrel costs, yet giving us a very consistent, accurate product with a long barrel life. The game is changing.

If your rifle is stored ready to go, what is the likelihood that in the wildest SHTFantasy that you will be able to shoot out that barrel? In any circumstance where you may use the rifle to defend life and limb (or liberty), what will be more important, having a barrel with a higher degree of accuracy and precision to aid you in hitting your target, or buying a more expensive product that doesn’t deliver the degree of accuracy but promises maybe a few thousand rounds longer life?

If SHTF did come, an accurate rifle and a competent rifleman could make use of that accuracy for not only self-defense at a distance, but that higher degree of accuracy may be the difference between hitting a small object (say a head, a small game animal, whatever) vs missing the target. I figured that if you had to shoot a target, with all your errors and stress from being involved in life or death situation, having an accurate barrel and consistent bullet will be of more aid to you than a less accurate barrel and a ballisticly poor cartridge blown about by the wind and hampered by inaccuracy. If all we see is a target which appears for a brief second, and we put that dot on it and quickly mash that trigger, I hope that not only is lady luck on my side, but that my rifle hit where it aimed, and my projectile not be pushed away by the environment. I don’t want a barrel to let a flyer go wide. I want consistent results from my barrel.

As civilians, the accurate barrels being produced at a lower cost outweigh the benefits of going CHF, Mil-Spec Chrome lined, etc. At the cost of a few thousand rounds of barrel life, we get more usable accuracy without sacrificing reliability, and it can keep costs down. Having an accurate rifle permits us to enjoy a day at the range honing our small target skills as well as permitting us the greatest chance that our bullet will connect both near and at a distance if the time should ever come to use our skills in defense. I realize that the mil-spec barrels can hit a man-sized target, but we all know that men wont stand up in a field waiting to get shot. They will present a very small, mobile target, and we need rifles with the accuracy to dole out hits instead of misses.

Accuracy and reliability can be had at a cheaper price than mil-spec barrels or other “hard use” military style barrels. The civilian marketplace has given us numerous options at a lower cost, and in the grand scheme of things, a civilian with an accurate AR15 has a rifle capable of wider use both as a rifle capable of hitting smaller targets, and as an accurate rifle for throwing rounds down range should he/she know how to use the rifle effectively. We are unlikely, as civilians, to burn out barrels to the point where CHFs long barrel life, will be realized. The benefits of a barrel which may not theoretically last as long, but which offers the shooter greater accuracy would likely be a smarter choice for civilian shooters. In some products, you can have both tight groups and mil-spec chrome lined love, so do your research. These mil-spec barrels will be ideal if the price is right and your research leads you to a good product, but smarter design and lower costs have lead me to jump ship on some of the mil-spec barrel mantra as the AR15 marketplace has evolved.

The AR15 is a do all rifle. Take the best components you can afford and assemble them into a rifle that can, literally, do almost everything well.