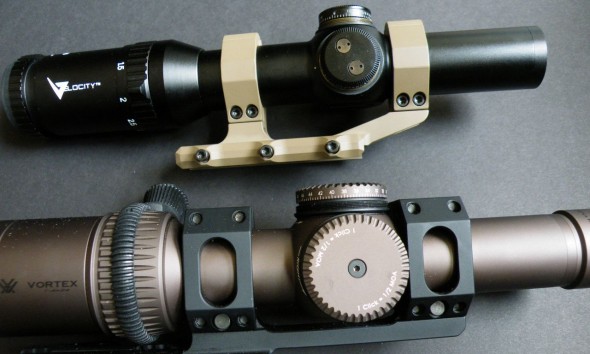 Variables. Ton’s of options. Let’s set some ground-rules here. I can’t possibly cover all the variables on the market. I can’t possibly describe the variety in reticle designs and methods of adjustment or, dare I say it, the philosophy of use behind each model. I feel a bit dirtier now for saying that phrase. What I can describe within the breadth of a few blogpost is thus: there are certain attributes that make a variable worthy on a general purpose rifle (A GPR in my eyes also includes the same gun you would grab if things went FUBAR) and certain attributes that you should look for in a variable that sits atop your fighting rifle. Let’s dive in:

First off, let’s cover what you want in a reticle. The perfect reticle would balance speed and precision, and the perfect variable would be red dot bright but yet these are relatively few and far between. Most variables splash the entire etched reticle with red light from the LED emitter to light up the whole reticle. Red dot bright variables typically have a center dot and do not illuminate the entire reticle. Each has its advantages and disadvantages. For example, the red dot bright models typically are in Second Focal Plane and do not illuminate anything but the bright center dot. So in other words, the red dot bright center dot would be the only illumination and if you wanted to count mil-rads for example in low light, well… you wont be able to see them.

Flip over to the “splash illuminated” optics where the entire reticle design can be lit up and the design can feature free floating components. The splash method of LED emitter is simply shining its red color onto the etched reticle which is in turn bounced back to your eye. This technology allows you to zoom in on your target, light up the entire reticle design, and let you count millirads, or MOA hash marks since you can actually see the whole reticle. The two disadvantages of these systems are that they release light out the front of the optic which permits others to possibly spot you, and the other deficit is that they cannot seem to get, at this time, red dot bright. A few models can get red dot bright, but this is not widespread of this design yet.

So the question is which is better? Which design is more versatile? A red dot bright center dot or a not so bright full reticle illumination?

Depends on the rifle and shooters goals. If you need to shoot in low light, and wish to use the BDC or the hash marks to estimate target distance, range, etc. then the center red dot type variables will not help you in those environments. If, on the other hand you want to favor the 1x characteristics of the variable for that red dot bright center dot, then you will best mimic that by skipping the weaker illumination of the full reticle illumination designs.

The Atibal Velocity Gave me thirst for FFP in a 1-4x which many shooters dismiss as useless or at best, unnecessary. I disagree. FFP variables let reticle designers use bold reticle designs which slide away as we zoom in to allow us access to the finer precision crosshair.

What *I* am moving towards is the first focal plane style optic with splash illumination. I am looking for optics with bold reticle designs that permit me to use my weapon light and not wash out the reticle design. The TA47R-2 is a 2x compact ACOG with tritium for low light. It has a triangle with illumination. When I turn on the weapon light, boom it becomes a hard to see tiny black triangle and post. A perfect example of a variable with this same deficit is the Meopta 1-4 ZD tactical K dot. While the Meopta optic is one of the few capable of daylight bright full reticle illumination… if that illumination fails that reticle is going to be piss poor when used in conjunction with a weapon light.

That sucks. Sucks Bad. Meopta 1-4 Tactical K dot with illumination off. I can’t see shit, and this optic is well regarded…

To that end, I want the big, bold reticle but at the same time, at 4X I don’t want that reticle so big and bold as to get in my way when I want a precise shot. On the flip side, one of my concerns with the Vortex Viper PST reticle is that it still wasn’t quite balanced. I felt that in low light, the reticle still didn’t catch my eye with weapon light illumination. I sold this one long ago.

The illuminated semi ring is black with the lights out. Much better design than the K dot if the batteries fail, but still not too Bueno.

What I understand now is that its a balance between reticle design and the illumination components. Not every reticle is suitable for consistent performance from 1-4x and from low to bright light, so we have to compromise these features for optics that blend the best of each feature. One of the FINEST threads on variables I have found can be found here at the optics talk forum. Look at the sheer number of reticle designs and look how the thin, precise reticle designs are really crappy in low light. Look at the bold reticles from SWFA HD 1-4X series and you can see why, in low light with weapon light illumination, you want those big bold lines. With a first focal plane optic you get the added advantage of having the bold lines move out of the way for a more precise center crosshair which is similar to how my FFP Atibal Velocity functions. Big bold lines and a thin free floated illuminated crosshair for precision.

SWFA 1-4HD no illumination with weapon light. Bold design for up close in low light. Precise center crosshair for when you zoom in. Nice.

So to increase the utility of these optics, we should run models with bold reticle designs like a tritium illuminated optic. Run it at low settings to give you a idea where the reticle is at on target, hit your weapon light and boom, the washout of the red illumination is no longer an issue as it has been replaced by a black bold reticle design. This is a characteristic I want in my variables and ever since I grabbed the Velocity, it’s something I have been really looking into and studying. Particularly of interest is how my example, the Velocity, runs for 800 hours on setting one which would be tritium bright in low light. That’s no Aimpoint, and none of these variable optics are at that point of 50k hours battery life yet, but that’s weeks of patrols without fear of a totally dead battery.

Big, bold reticle designs in first focal planes seem to be ideal for a fighting optic. With the advantage of FFP, we move into 4x where the bold design moves out of the way and lets the thin, precise crosshair grow in size along with the zoom for more precision in your shooting. Should the battery die, and that’s key… then the thin crosshair designs will be hampered in low light and the red dot bright center of the reticle becomes useless. Under the weapon light, bold reticle designs can still be discerned quickly by the shooter even with the illumination off. To prolong battery life, run optics at low settings and utilize them as a “tritium bright” reticle when powered on for extended periods. Let the weapon light support the contrast of the reticle design you have chosen. If possible, for full reticle illumination, consider getting a killflash to mitigate light bleed from obtuse angles that could be seen by your opposition.

You can still use big bold reticles in bright daylight, though they may not be capable of red dot brightness levels such as my ever convenient example, the Razor HD. However, as can be seen in the above link to optics talk, which I strongly recommend you click, there are some reticle designs that truly shit the bed in low light with no illumination. That’s not good for a rifle you expect consistent performance from. If electronics go kaput, then you will struggle with some designs in low light conditions.

Thus we wrap up part 1 of the my thoughts on variables and their application for the modern rifleman. In part two, we will cover weight considerations, magnification levels, shooting these optics in low light, and best practice methods of zeroing your variable.