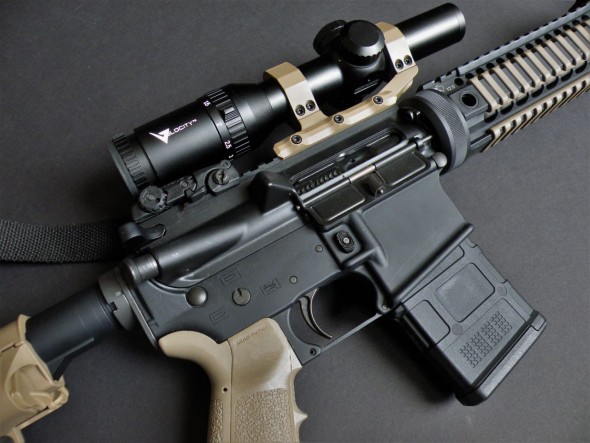 So Atibal wants to raise awareness of their new Velocity 1-4 X. They recently introduced this optic as their flagship product to fight in the ridiculous variable optics market. There are tons of choices in this market, and Atibal wants me to compare and contrast their new product with something else I own… The Razor HD II.

This sounds lopsided. A mid-range optic priced at $579 vs high end glass that runs $1400 dollars. What’s the point? Atibal has been pushing the Velocity aggressively, so to compare it to something out of its class was kind of a odd proposition. Well, after talking to Jimmy, Atibal’s head honcho, I understand now. He is tired of consumers comparing this to Chinese and Philippine optics such as the Viper PST, Strike Eagle, and other low end optics, etc. He says it’s better than similar priced optics and closer in quality to high end glass. He wants me to compare it to the Razor because he believes it is more comparable to higher end glass than any of the slightly cheaper Chinese made optics.

Well, let’s do this:

So on paper, its somewhat tit for tat. Razor weighs more. The Velocity has a smaller field of view through its magnification range. Both are made in Japan which is desirable. The Velocity is substantially cheaper. Both adjust to 1/2 minutes per click. The Razor is second focal plane meaning the reticle stays the same size through the magnification, the Velocity has a first focal plane reticle which grows and shrinks, but remains the same size relative to the target. Let’s hit the objective impressions.

Glass is a very touchy thing. Everyone wants the clarity, and performance of the highest end once they experience good glass. Images pop with a color and brightness that makes the human eye hungry for more. Just like the first time you jumped from standard to HD tv, the differences between bottom feeder junk from Amazon’s Chinese sellers to true quality optics are breathtaking. So how do the Razor and the Velocity compare?

Very well. The optics for both the Razor and Velocity are outstanding. Both are clear, bright, and free of any specs, dust, lint, or other deformities in reticle or glass. Peering though both the optics over a number of days and in all lighting conditions, I will say that It was difficult to perceive the differences in image quality. I looked at trees, birds, I read small text on distant signs, and neither optic had a issue with those menial tasks. If I had to choose one right NOW that had the overall better image, I would say Razor is a smidgen brighter, but that’s really pushing my ability to tell, and it’s not $821 dollars brighter that’s for sure.

The eye-box on the Razor is also larger, giving the optic more of a ghost ring effect that makes the optic disappear a bit. The Atibal has a narrower field of view, but in a practical sense they are both generous as shooting both eyes open at 1x gave me no concerns over field of view with the Velocity.

Illumination wise, the Razor HD has a bright red dot at the center of its reticle which is red dot bright. Really fantastic brightness means that in the harshest lighting conditions you will have a red dot. The Atibal as a center illumination that only illuminates the FINE red cross hairs in the center of the reticle. The Velocity does not get as bright as the Razor, and it can wash out on bright objects in a sunny environment. In all other lighting conditions, the illumination is clean, doesn’t bleed, and the small center crosshairs are illuminated red and remain surgically sharp.

Please Note: these pictures do not reflect in the optical quality of either optic as I couldn’t get the “perfect” photo for either of them. The Velocity’s LED only illuminates the thin crosshairs, so I suspect this is why it doesn’t get daylight bright. Thankfully the thick posts allow you to bracket the target easily in bright conditions.

Reticle pattern: The Razor has a second focal plane crosshair with BDC which is useful for distant shots as long as your load matches, while the Velocity has a different methodology in that it is first focal plane and has a fine set of free floating crosshairs with large, bold, lines at 3,6,9 o’clock. As you zoom in, your fine center crosshair expands to a thick crosshair and the bold lines move out of the way.

One thing I noticed immediately is that the Velocity’s very fine center crosshairs coupled with the bold posts really compliment the FFP design. The crosshairs in the center of the reticle are sharper than the Razor HD’s crosshair and permit you to take a very precise shot even at 1x, where as the Razor’s thicker crosshairs would obscure a small target. I really DIG the Velocity’s reticle being both precise for distance and capable of fast shots up close thanks to the thick lines that surround the crosshair. This helps it overcome its lack of red dot bright illumination. The reticle of the Velocity is uncluttered and clean.

At 1x the thick lines help bracket targets up close, then at 4X they move out of the way to let the thin crosshair do the job for precision shots. Above 4x. Below 1x.

The Razor’s turrets rotate 50 MINUTES to a full rotation, which is a good thing since its harder to lose your zero in the very generous turret. The Velocity’s turret spins 30 minutes to a full rotation, which is still very good. I used 18 minutes of elevation with my 75 grain reloads over 24 grains of Varget to hit a target at 600 yards for reference. They both have enough elevation and windage adjustment to make corrections without losing yourself in the dial with the edge going to the razor for its nicely etched lettering and extra adjustment ability.

Clicks on the Razor feel tiny and tinny. The Atibal’s turrets feel positive and distinct. The Razor has nicer laser etching, the Velocity could use larger laser markings.

However, its not so cut and dry as the turret assembly on the Velocity is more distinct and has a much better feel to adjustment than the hollow and small clicks of the Razor HD.  It has a distinction between clicks that permits one to make adjustments without feeling like your going to click through a few 1/2 minutes on accident. The Razor is easier to go past the click settings you want as its adjustments are just too fine to feel as distinct to the Velocity’s turrets.

The magnification ring is overly stiff on the Razor, and you *will need* a cat tail. Consider this a necessary extra investment. The Velocity has a built in cat nub, and it rotates smoothly and easily from 1-4x without needing a cat-tail. The Velocity uses a patented magnification mechanism which consists of a gear drive system where as the Razor uses a pin which must travel in an long arc cut out into the main tube. According to Atibal’s Japanese manufacturer, the pin style optics require a large arc cut into the main body of the scope which weakens overall structure, where as the gear drive system used in the Velocity only creates a small opening on the tube leaving the mainbody intact and thus tougher than conventional scope design.

The illumination wheel of the Razor has 11 settings and locks in place should you want to lock it down. The clicks feel solid and secure on the Razor. The Velocity has seven illumination settings and the clicks on the turret also feel solid, secure, and distinct. Let’s quantify this by comparing them to another optic I have; it’s a Primary Arms 4-14x and the illumination turrets on that product feel mushy and cheap, plus one “off” setting actually runs the optic at full brightness. Whoops. This is where the separation between Chinese optics and our two contenders here split: Both the Razor and Velocity feel incredibly well made. So the fact that these two optics are made so well should explain why Atibal was adamant about me comparing the Velocity to the Razor HD. Let’s move on.

The Razor is several ounces heavier at 25 oz vs 18 oz for the Velocity. I found the Razor actually requires MORE eye relief than the Velocity even though specs are similar. It needs a SPR mount. I have the Velocity on an extended mount and it works well. In practice, the Razor actually pushes lots of weight forward because the Razor *needs* a SPR mount and it weighs more than the Velocity. I noticed my rifle felt front heavy with the Razor, and less so with the Velocity which is lighter and mounted further back. This is also tied into the two mounts which the Atibal had the lighter Aero Precision ultralight mount, but with the Razor needing to be pushed further out the balance still swings in favor of the lighter weight Velocity.

Both are waterproof with or without caps in place. I threw them both in the kitchen sink and neither leaked and both electronics systems remained operational. Always a good sign. The Velocity also survived a good few hours in the freezer. Not a torture test, but I just thought you should know.

What’s your budget? That’s the bottom line. Do you want to pay $1400 ish plus a mount for the beutiful Razor HD II, or save some coin at $579 for a mid-range optic with high quality construction and great optical clarity? That’s the key here… as a mid-range optic, the Velocity is fighting hard for your dollar, and it feels like a well made optical instrument. The illumination isn’t daylight bright, but it is comparable to the brightness of other optics I have owned or handled currently on the market such as the Viper PST in that bright light can wash it out. My thoughts with the Velocity’s illumination are to keep it at setting one (with a battery life of 800 hours at setting one per the manufacturer) and run it like a tritium powered optic in low light for hunting or self defense. Use your weapon light on the target and the red might wash out, but you still have a fine center crosshair surrounded by thick “you can’t miss them” posts to bracket the target. It works well. A list of some variables I have owned: Primary Arms 4-14, Burris MTAC, the Vortex Viper PST, a Razor HD II, and now the Velocity.

Overall first impressions are good, and despite some characteristics that don’t quite match up to the Razor, such as illumination, it’s surprising to see that many aspects do match up to the Razor, particularly in the construction and optical quality, while definitely trumping the Razor in price and weight. I think that the Velocity could be a great contender in the 1-4x variable arena particularly since no other Japanese glass runs in this price range. This isn’t just well made “for the money,” it’s well made. Period. As always, I’m on the lookout for quality at a working man price, and in that regard I think Atibal’s Velocity is a winner so long as it holds up over time. I see no reason to suspect optical failure at this point.

Disclaimer: This optic was purchased in exchange for two months of advertising up at the top of the page for the Velocity. The optic is now mine and I own it. Long term review, plus box testing incoming!

← Everything’s Legal. Well almost… Welcome to the New Face of CMP / High-Power
Some Thoughts on the Little ACOG: TA47R →
Scroll Up