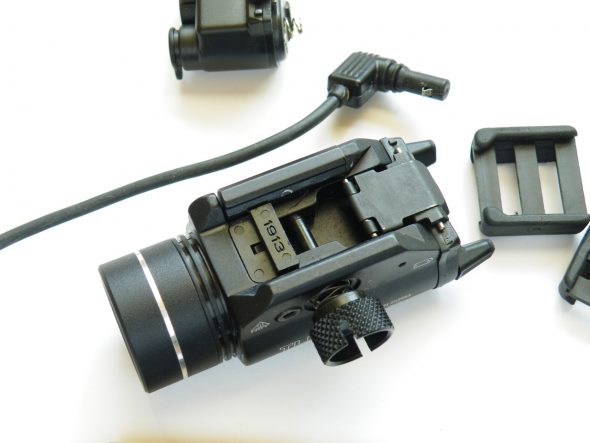 How can I review something as established as the TLR-1? There are literally hundreds of reviews on this little light, and it has been around for many years. So why review it now? Because I found some minor issues.

Sometimes when I buy products, I research them too.  I don’t always want to guinea pig test a product that I need such as a light that will be on my home defense rifle.  I want something that is established and that works. The TLR-1 HL was a safe bet, and I purchased it at least a year ago. It has been shocked, dropped, and beaten right beside all the red dot optics I have tested lately. If you watch any of the DIO optical videos on my YouTube channel, you can see the TLR-1 HL sitting on the carbine… along for the rough ride. It has been pounded, drowned, watered down, and put away wet.

The light has proven its robustness, as it still works… but I have noticed that several areas could use improvement. The allen key hardware in the tail cap is not coated with a rust resistant coating and has taken on some rust. In addition, the quick release pressure switch showed evidence of green or white corrosion inside the port.

A little rust on the left, and a little green corrosion on the right.

Rusting and corroding on an electronic device such as the TLR-1 is not my idea of a good thing. Despite the light layer of rust and corrosion, the light still works. This IS a good thing. Its strobe function and standard lamp function are as bright as ever. It still has 600 lumens of raw blinding white light. The thumbscrew attachment and hardware remain rust free, and there is no other evidence of failure. I traded out the pressure switch assembly with the included rocking lever end cap. It makes me feel better that the rust and corroded connector are off the gun.

The interior of the battery compartment also appeared to take on a slight bit of rust that I cleaned off the spring contact, so it is possible that some water infiltrated the rifle assembly. I did not submerge past 1 meter and only did at 1 minute max.

What’s important is that the light still works despite the copious amounts of abuse it has experienced. The amount of pounding my carbine has had in the last year make me confident in the electronics of the TLR-1. If you aren’t going to be in a marine or wetlands environment, the TLR-1 with rifle kit should serve you well. I believe a drop of lube should keep that bolt in good condition. Also double-check how tight the quick disconnect is or run the rubber plug instead of the switch. It is possible water got into the port due to it being too loose, but regardless it is a point of liquid entry that would then become trapped. It is not obvious that it is seated all the way, because the light still activates and it remains plugged in tightly even when not fully seated.

This isn’t a full blow review per se. There are simply too many reviews of the TLR-1 and it’s very much a known quantity at this point, but I felt we should look at some of the issues that have popped up with my rifle kit version of the TLR-1 HL. Ensure the bolts and exposed components get a light layer of lube, and make sure the quick disconnect pressure switch is seated or omit it altogether. In the above photo, it is NOT seated all the way, yet the light still activates. This makes it easy to commit a user error that you didn’t even know was there. Water is ready to get into that port and you wouldn’t know anything is wrong.

Otherwise this is a tough light, and like many other reviews praising the product, it should still be considered a tough tool for those who want to know what they are shooting in the dark.