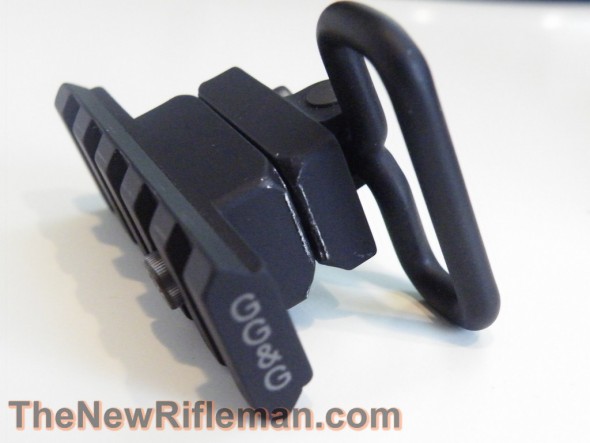 I was looking at different options to mount lights without investing in FF rails.

The GG&G SLiC thing was a inexpensive choice to mount a TLR-1 to my rifle. The rail utilizes the FSB tower to clamp securely into the system. Weight is around 3 oz and add another  4.5 oz for the TLR-1 with batteries. That said, you notice the rifle is a bit more front heavy, especially when its waaay out there on an A2. Some rails will end up with less weight than this combo. Some rails, such as the DD M4, weigh less than the stock hand-guards and barrel nut. Some rails, however, are pigs and the SLiC-Thing with a small light will add less weight to the weapon.

The SLic-thing has multiple sling swivel options available. QD, Hook, and traditional sling swivels are all available. If you don’t need the rail the product is also sold as the Sling-Thing without the rail.  Shadow cast from this setup is at 7 o’clock. So far, it has held up to a decent amount of use. It’s all aluminum with high quality screw hardware. I don’t think this item will give up the ghost; it’s a solid and well machined piece of equipment.

← Estimating Range with Red Dots
My Editorial Hosted at LooseRounds.com →
Scroll Up