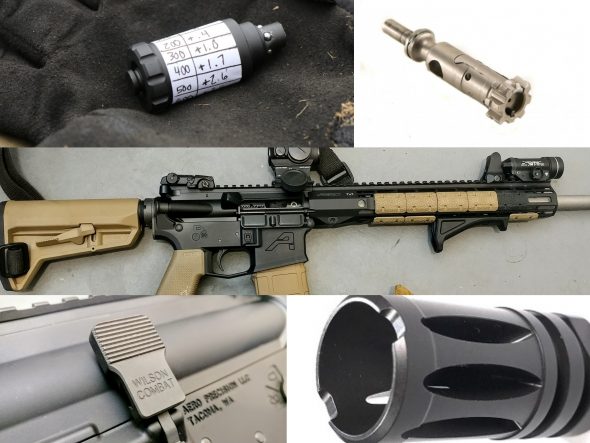 The basics will always be the basics. Anyone with a few years experience on the AR15 platform should be able to point new shooters towards the *essential* upgrades that we all know and understand: light, optic, sling, trigger.

What else is necessary? Really, not much. With basic upgrades, the standard AR15 is capable of saving your life at point-blank and then is able to turn around and pop steel out to 500 yards. That’s versatile. So after the basics are covered, whats next? Is there anything out there that’s worth a darn?

There are a number of items out there that offer unique advantages past the basics. Some of these items are more specialized, and others would benefit nearly everyone. A number of these products have made me think hmm… why didn’t I do this sooner? Without further ado:

This item is something I didn’t know I wanted until a cast bolt release failed me. The Wilson Combat was promptly ordered as a replacement and I can’t believe how much I like it. Machined from bar stock, and retailing at around $31… This upgrade gives you an extended paddle for faster, easier bolt catch manipulation. The added leverage makes slapping the bolt catch effortless, and reaching over the optic to hit the bolt release while your slung up is also easier. I use this paddle on my personal do-all carbine and I feel way better about this machined part than the cast part it replaced.

The bolt release has three positions and if you want the paddle vertical or horizontal… The choice is yours. Just be sure to use loctite. Get it at Palmetto State Armory by clicking here.

Do you like having peace of mind? Like having a rainy day fund. A spare tire for your car. A backup magazine for your carry piece? Well let’s extend that piece of mind to your rifle’s bolt: The LMT enhanced bolt group is made to a higher standard than a typical mil-spec bolt. From the higher grade ArMet steel to the stress relieved bolt lug and enhanced geometry… This is a bolt I want so I can hand my grandkids a working rifle. My first hand experience with this product revealed that it was boring. It simply did its job without drama. It cleaned up easy with the nickel finish and extracted each and every case without failure.

So will you notice anything is different after installing a LMT Enhanced Bolt? No. It’s simply having such a high quality component gave me confidence in the rifle as well as piece of mind. Check it out at the link above.

This one is pretty unconventional at this time. The popular thing to do is get a longer rail for more leverage on the gun. Faster transitions, more control on follow-up shots, etc. I am moving the opposite direction. Shorter rails are stiffer rails. The longer the rail, the more leverage impacts and weight will transfer to the rail. Modern free float rails are skinny skeletonized hollow beams and this is a recipe for failure. Be it POI shift of sights and lasers, or simply bending it enough that the rail comes into contact with the gas block… I decided I needed to step back and get a stiffer product.

12 inch rails are as long as I will go. #railgate

Mid length and rifle length systems get 12 inch rails on my rifles as it long enough to cover the gas block on middy carbines but not so long that becomes over leveraged by impacts.

So with a stiffer rail I am confident in my rifle’s ability to reduce the chance of POI shift and I have no problem moving my gun from target to target… Even if I don’t have as much leverage as Chris Costa.

Shooting Bags That Move With You:

The X-Wing mounts to your sling swivel. You moving? The bag is gonna come with you.

Shooting bags are an amazing upgrade to help you with positional shooting. Precision shooters have used them for years, but for most people, shooting bags are simply a tool to sight in and then they go back in the range bag. Nope. How about a bag that can be mounted on the gun so it can move with you from shot to shot? The Armageddon gear X-Wing is a tool to aid your ability to quickly setup and get on target when moving from point A to point B. It features a sling swivel adapter and velcro to let you mount in multiple ways. When paired with something like “The Brick”, then you can move and create stable shooting positions as you go… be it at competition or in the field. If you don’t have some shooting bags, then you are truly missing out on an essential tool that can KEEP YOU ON TARGET while you mount your rifle in weird positions. When shots aren’t done from a bench or a clean-cut grassy field in prone, then you will appreciate shooting bags and their ability to help you stabilize that rifle from that awkward height sappling/tailgate/fence.

The Brick is runner coated and capable of being strapped to the rail. Shooting from unconventional surfaces makes these items worth their weight in beans.

Wanna up your stability game? Get a Armageddon Brick or X-Wing at LarueTactical.com

Data. Data is everything. I have struggled for years with laminated dope cards, dope cards taped to my stock, phone apps… I want something quick and easy to use that a) doesn’t take up much space b) doesn’t require batteries and c) i can see the data without coming off the gun.

Enter the dope roller. A drum. A simple drum. It fits in the sling swivel. You write dope on it. You roll it to review said dope. Brilliant! Now your data can be on hand, easy to see, and the system takes advantage of sling swivels already present on your rifle. Neeed. Neeeeeeed. Grab one from Precision Rifle Components Here.

Thinking you want a compensator but don’t want the front of your rifle to look like an artillery piece? Don’t want to spoil your rifles classic looks with a odd flash hider? Well Forward Control Designs has something for you. The 6315 flash hider has the look of a standard A2, but due to some tuning trickery it reportedly reduces muzzle climb by 15-20% while still reducing flash to A2 levels… and the A2 is a pretty darn good flash hider. If you want your rifle to keep its classic lines, but need a bit of a performance boost, look no further! Check out the 6315 at Forward Control designs Here.

These are a few of the products I have either owned or have had my eye on. My favorite piece of gear so far has been the Wilson Combat bolt release. It’s easy and speeds up reloads by making the bolt release a bigger target. After dropping my rifle on the ground (intentionally) and suffering a bolt catch failure, it made me realize that sometimes its the details that make increase your confidence in your rifle. Cast vs tool steel? No brainer.

If you haven’t subscribed to my email list, scroll back up ☝ if your on a desktop and hit subscribe. If you’re on mobile, keep scrolling down. I don’t post ads. I won’t sell your data.  Notifications of new articles are all you are gonna get dad gummit!