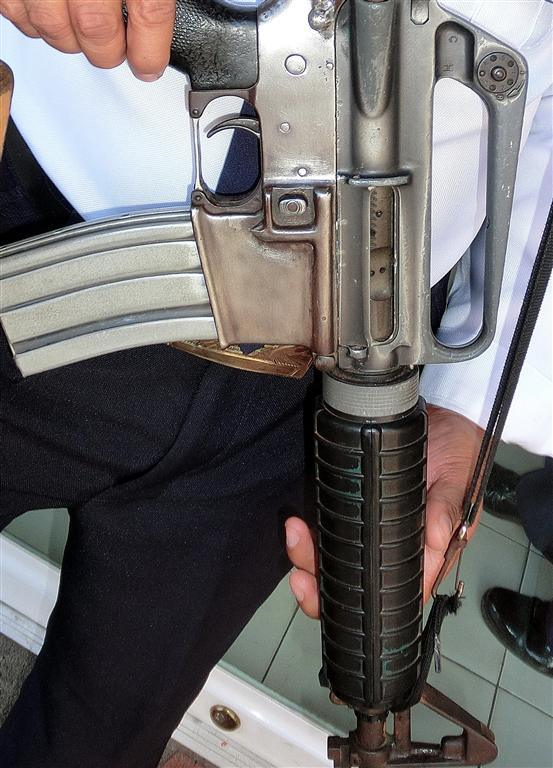 I have been hypothesizing over the last few days as to what the toughest configuration would be for the AR15. I think the formula is pretty simple, but it may make some people a bit defensive over the reliability of certain gear that they trust.

The toughest AR15 is a configuration which can survive abuse over the long term. I believe when we aim to build that tough “SHTF” gun, we want reliability and longevity to our weapon system. So what components will add to the longevity part?

First point to touch on is the BUIS as primary sights. Many new shooters are configuring their rifle with the BUIS as their only sighting system while they wait on a optic. Ok, that serves a purpose, but then we have another subset who like iron sights and continue to use a BUIS as a primary sight. They just don’t know better. This should be a no no on a rifle meant for SHTF. I own a pair of the very popular Magpul BUIS and they are tough, but make no mistake a hard drop can shift a pair of front or rear back up irons easily.

See this test from KitUp: metal sights such as the troy BUIS and Diamondhead can bend permanently from a hard impact. Point of impact shifts ranged from near 1 MOA from the Magpul BUIS vs the 16 MOA (!) shift from the Diamondhead with the Troy around 3 minutes of shift.

What does this tell you? One is that a drop is likely to permanently bend a metal BUIS which results in a part of the sight where the metal has been peened and thus permanently shifted the point of impact. Magpul’s polymer likely flexed on impact and returned to zero fairly successfully. Well done.

Relying on flip ups as a primary for any shtf build is a bad idea. If you mount them as your primary sights on a free float rail, it’s another bad idea. One drop on a hard surface, that one time you forgot to tell your buddy that you left the rifle leaning against his bumper… if that rail bends then your zero is lost. Your barrel could still be free floated, but with a shift producing impact, how will you adjust that to re-zero?

What’s really hard to quantify is which rail will survive drops, bangs, and resist bending. There are simply too many models available to grade them on durability and longevity. Even battle tested rails can bend or fail, as a AMU shooter pointed out to me that a popular mil spec rail with a bolt on mounting system was destroyed with sling tension. The point of failure? Bolt shearing and thus mount loosening.

So back up sights on a free float rail? I am going to go out on a limb and say that running a rifle like this for a long time will likely lead to an accident that either destroys your sights or possible tweaks the rail to a point where your sights can’t be zeroed. So if you want to run a rail, make sure you pick one that has been well vetted by the community, especially high power shooters since they bend and pull on rails with lot’s of leverage and tension… then put Magpul back ups on it. Then fold them and don’t use them as your primary sighting system.

I think the best bet for a tough and reliable AR15, at least from a iron sights standpoint, is going to be a iron sight mounted to the barrel via a traditional front sight tower and pinned in place. The classic A2 front sight tower is a forged assembly and because it is attached to the flexible barrel, it is likely to survive impacts without severe peening of the sight assembly as the barrel will flex to absorb some impact. Much like the Magpul BUIS, that which bends does not break.

Clamp on irons sights are better than rail mounted irons for reasons specified above, but obviously they can work loose if not thread locked in place. Flip up clamp on irons are also something I might move away from seeing as how I broke my own “combat tested” PRI flip up front sight.

How did I break my PRI front sight? I peened the metal inside the sight by pulling back and having it get caught on a barrier while in the deployed position. It no longer held itself upright when I flipped it down, it just flopped up and down. The sight required disassembly and I had to file down the peened areas that would cause the release button to stay stuck in the release position. So much for $180 of “combat proven” front sight.

So what about the rear sight? We saw that the flip up sights can peen and bend via KIT-Up from earlier. Flip up BUIS are not durable enough as a primary sighting system for a “long term” rifle. A full, old school carry handle upper will offer substantially more stiffness and rigidity than any BUIS can offer. In first place I would grade a A1 sight system followed by the A2, and then by a detachable carry handle or a chopped detachable handle.

In my mind, I cannot see any other rear sight offering the same level of “overbuilt” construction of a fixed carry handle assembly or a detachable assembly. Couple this with a fixed A2 front sight and that’s about as long term tough as you can get with fixed irons. I would suggest, based on study from people who have been there and done that, that you replace the A2 front sight post with a A1 which is tapered. The reason? The A2 post can snap if struck. The taper of the A1 gives the design a bit more strength and it has finer adjustments than the A2. There is no reason to put national match front sight posts on a fighting rifle, and yes, the Canadians made a mistake in doing so. There is especially no reason to use those SKINNY KNS micro pin sights. Yea, like that’s not going to snap right off.

A rifle with nothing but irons is not giving you any advantages. If we want to give ourselves an ocular advantage, we need glass. Insofar, the ACOG has had a stellar reputation by our fighting men and women for durability and strength. As a default, I am going to say that a ACOG will be a great choice for a long term rifle. There are many other quality products, again, of which there are too many to review and discuss. Is the VCOG tough? Likely. Is the Elcan gear good to go? It’s another optic that’s been there, done that. What about my beloved Razor HD? It has seen combat, but its never been issued, so again it’s all relative. Will your optic last a few years carried every day, banged around in trucks, and dropped a few times a year accidentally? Even I don’t know how my Razor would fare.

One thought I had for long term is that things fall off the gun, or rather THINGS CAN fall off the gun. Anyone who’s done competition has seen their fair share of parts that come off rifles. Once I had a detachable carry handle work loose from the thumbscrew and there went my zero. If any screws or mounts come loose, and that screw is lost in the field, can you replace it? Will your mount still hold that optic securely sans one screw? If your zero was lost would you KNOW it?

Accessories can break, even popular ones like the cool, hip, Inforce WML: ARFCOM shows us that this popular plastic flashlight likes to snap!

So all accessories *can* break, and your rifle may be relegated to what’s permanently attached to the gun at some point. I have two rifles that I have outfitted with modern equipment, key-mod, rails, etc… but I am going to keep my trusty A2 in a shape that minimizes the possibility of crap falling off the gun, or shit breaking. After installing my Micro ACOG to the carry handle, and finding a flashlight that is worth it’s weight, I hope to have it in fit form for long term use. Key-mod and MLOK are great for short term accessorizing, but in reality I think they offer more unique ways to help crap fall off the gun or for screws to shear and break when your accessory is struck.

Too many configurations. Too many new shooters. New shooters are a good thing, but one thing I want to point out with this article, is if your building something for “the end of days”, really look hard at every components and think of anything that’s detachable from the base rifle as something that could break or fall off if things got loose. Loctite is important. Will a key-mod rail be stronger than a fixed rail on a quad rail? Is your quad rail fit for duty? What happens if you drop that gun on your flip up irons? Is your optic tough? Is the mount going to keep all its screws?

So what’s my final opinion? What’s the toughest AR15 configuration? Likely it is a A1 fixed carry handle, with a fixed A2 or A1 stock assembly, with a 16 inch medium contour barrel, with a fixed A2 front sight post, a heavy, outdated drop in quad rail that still uses a steel barrel nut, and with a mini ACOG bolted up top and a surefire something for illumination… but that’s jut a guess. The shorter barrel is just to save weight. A1 and A2s aren’t lightweight and sexy anymore, so we have to bend the rules a bit. 🙂

← Some Thoughts on the Little ACOG: TA47R
Trijicon TA47 On Sale at Midway! →
Scroll Up