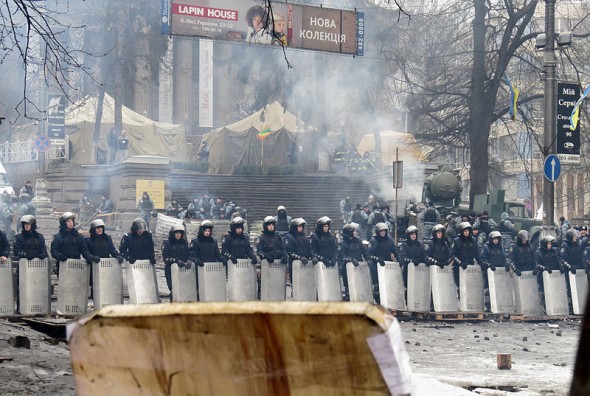 There are many forms of shtf. Furthermore there are many scales of disaster. The recent riots here in the US and in Ukraine give us a glimpse of a two separate riots of vastly different intensity. Let’s take a quick look at a few factors present in both riots.

The police are utilizing a variety of weapons, but in Ferguson, the most ubiquitous is the black rifle. Every other officer appears to have a carbine AR15 with a  red dot optic. A few sharpshooters are equipped with magnified optics. Tear gas is implemented liberally. The police are well equipped with gas, gas masks, and a variety of less lethal products.

What does this tell you? If you are bugging in to protect your property, having access to gas masks could be useful. When tear gas is overpowering a block, and your property and family is nearby, how well will you be able to defend yourself if you can’t see? That said, there is a need to practice with your mask and set up your weapon to accommodate the mask. Plan to look like a weirdo at the range.

You ability to properly use your sights with a mask may be obliterated depending on the mask and your chosen sighting system. A visible laser could be helpful for targeting while masked up. Another option that I am looking into is the ACOG / RMR combo. Elevating the RMR on a piggyback ACOG mount appears as though it may give adequate mask clearance. I am looking into an Isreali M15 mask for its wide lenses and good field of view.

Furthermore, since police are armored with plenty of armor, shouldn’t you have some as well? Ultimately you don’t want to draw police attention, so we need to balance keeping a low profile with having access to good weaponry. We have many shop keepers out with firearms ready to defend their property, and the police seem to be tolerating this activity…  I am reading reports that there have been times where there are no police to call; they simply pulled back from the area to deal with bigger areas of the riot.

Also of note, just because police have armor vehicles, but that doesn’t mean they are invincible. Look at this video from Ukraine: from my understanding, the volume of Molotovs 41 seconds in disables the MRAP. If anything this should serve as a severe warning: a single Molotov is a danger, multiple Molotovs are an inferno. Do you have a fire extinguisher?

The weapons used by the mob include small arms, Molotov cocktails, and general overwhelming group violence via fists, bats, and other handheld weapons. The mob of people, who are racially charged and aggravated, can be a real threat to the safety of anyone they believe worthy of a beat down. Ferguson has not reached the level of the L.A. riots, but that level of severe violence is in the U.S. history books. It can happen again if we are not careful. Remember the mobs of youths that were beating Hispanic men down in the wake of the Zimmerman trial? Racial tension can be a powder keg. We can thank our liberal media for fanning those flames.

A show of arms is a psychological deterrent. Sam’s Meat Market in Ferguson MO.

Preventing grave bodily harm to yourself and others is why you are armed. If you need to present arms, then you are giving would be attackers a clue that you are prepared to fight. The more serious you look the more likely they will pass you by. We see several examples of store owners defending their property with modern rifles. Rifles and shotguns are great visible deterrents because they can be seen from a distance. The shops in Ferguson have been spared when their shop-keepers present arms at the storefront. Absolutely necessary unless they want to be looted and burned down like the Quick Trip. I did notice something though, the people guarding the shops seem to be susceptible to a drive by shooting. They have little in the way of cover, and they don’t seem to have a means to subdue a fire if a Molotov was tossed their way. While the group is wise to protect their property, certain extra precautions should be taken:

If you find yourself about to become a victim of mob violence, think about this for a second… After the shots are fired, and you legitimately defended your life by taking an aggressors life, how will you secure your word against his or her friends? Be assured the police will investigate a property owner thoroughly once lead starts flying.

So how do we fit our rifles into this situation? Long arms are a great psychological barrier against attack. You are showing your fangs, and the mob has left the armed shop-keepers alone. Protecting property is a good reason to bring the long arms out without much fear of getting arrested or questioned. In Ferguson, the authorities understand the necessity of protecting life and property. Having a gas mask looks like a good idea. With tear gas everywhere, being able to defend yourself if things go sideways while your block gets a whiff of gas seems important. A weapon mounted camera sounds better and better for a SHTF weapon. Securing your own evidence will be of the utmost importance if you have to shoot. This could save endless headache in a defensive shooting if your cause to fire was a just cause. Plus, in the wrong circumstances, with the wrong people, you can be NATIONAL headline news.