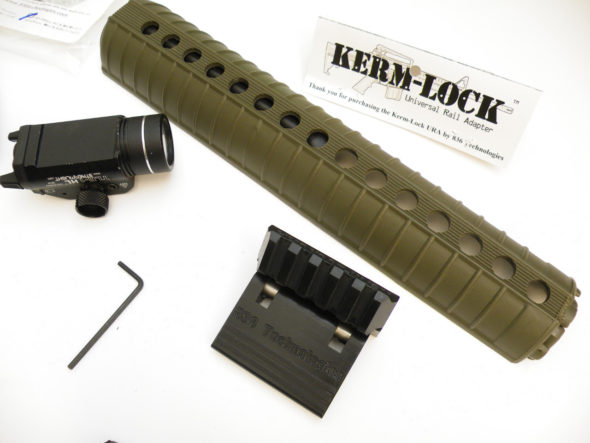 Modular rails got you down? Wish your A2 could accept some M-Lok goodness without ruining the classic lines? Your department won’t let you change the circa 1990 issued carbine and you need a light?  Welcome to Kerm-Lock. The Kerm-Lock system is a modular light mount for A2, M4, and CAR handguards.

I was sent the Kerm-Lock for T&E by KermLock.com after contacting the company. I was curious about the system after I discovered it via Google.

So what is it?

The KL system is a machined delrin picatinny rail assembly which attaches to a “standard” plastic hand-guard by means of a cam and locking system. It securely fastens without modification to your hand-guard. It’s so simple that I am really dumbfounded by the ingenuity.

I would wager to say that if the Kerm-Lock system had been around in the late 90s to early 2000s, it could have kick-started the modular accessory concept. Everyone had A2, CAR, and M4 hand-guards and early picatinny rail systems were heavy and expensive. It’s one of those accessories I wish had existed years ago when the assault weapon ban sunsetted. That said, it’s a good product for shooters who prefer to maintain a KISS rifle with the stock plastic furniture. Not every rifle in your safe requires the M-Lok / KeyMod “modernization” treatment.

The cam pulls the bolts upwards which in turn compresses the polyurethane doughnuts. This traps the system in place.

I am a big proponent of keeping all your rifles ready to go for anything. The advances from the A1 to the modern civilian carbine are immense, but the bullet behaves the same way it always has. You have to see your target, and you have to engage the target without disrupting the sights. On an old school iron sight rifle, this is far more complicated at night. There are several competing products that attach to the rifle via screws or clamps, but breaking out the loc-tite and screwdriver is not what I would consider modular.

Before Kerm-Lock I WECSOG’d lights on to my A2 rifle. This works, but modularity requires clippers.

After Kerm-Lock: Quick attachment allows me to trade the Kerm-Lock and light between rifles in seconds.

The Kerm-Lock really does pop off in seconds and it can easily jump from carbine to carbine, rifle to rifle. The animation below should show just how easy it is to install, and it’s just as fast to remove.

As you see from the photos, the lever has great clearance and keeps away from the large “rifle kit” knob of a Streamlight TLR-HL.

I like the Kerm-Lock system, and it feels just right for KISS or classic rifles. It solves a problem by thinking outside the box and adds modularity to simple rifle setups. The Kerm-Lock retails for $59 dollars and can be purchased here.

This is a good product for people who still like to keep it simple. (You still exist right?) Another point the designer noted is that some officers cannot fit a light for their carbine in certain weapon racks. The Kerm-Lock can be attached in seconds so adding a light once the carbine is out of the rack is a simple affair.

So far I don’t see any glaring flaws with the system. Twisting it, bumping the TLR against hard corners, and attempting to pull the assembly off by hand proved futile. It’s solid. I will update readers if it snaps off down the line, but honestly the Kerm-Lock appears to be stronger than the usgi handguards. I would fear them breaking before the KL.

Disclaimer: I was sent the Kerm-Lock system from the manufacturer for test and evaluation, and there is no commission earned by the new rifleman for any Kerm-Lock products sold. Prior to this article, I had no contact or relationship within the company.

← Accuracy Testing the Vintage Colt SP1 at Looserounds.com
Two Are Better Than One: Red Dots and Irons →
Scroll Up