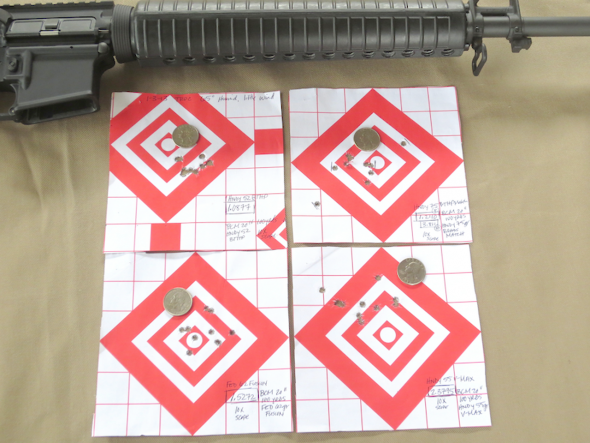 This post shares some data that I think many readers will find most intriguing. A true “before and after” free float accuracy comparison. The question of should I free float my Ar15 or not has been asked countless times but often without definitive examples. Well, we have a definitive example. Without further ado… Is Free-Floating an AR15 Barrel Worth it?

The AR-15 type rifle has surged in popularity and availability in the last few years, and perhaps the most common decision a potential buyer or owner has to make is whether to use standard handguards or to use handguards that free-float the barrel. I’ve purchased and built several ARs and I’ve always resisted the temptation to spend the extra money to equip one with a free-floating handguard. I’ve been told repeatedly that a free-floating handguard will increase accuracy by reducing the contact points on the barrel, allowing it to vibrate freely, and it seems that every “tacti-cool” rifle offered has one, and yet I resisted. I searched but I could not find any before and after tests that showed evidence that free-floating a general-purpose AR was worth it, so I decided to try it myself. I would test a single rifle that used standard handguards, change that rifle to use a free-float handguard without any other changes being made, and then test that rifle again.

When we say that free-floating a barrel improves accuracy, what we really mean is that it improves precision, the ability of the rifle to shoot the bullets to the same spot each time. The precision of a rifle is determined by shooting several rounds at the same point of aim and then measuring the size of the group, and the smaller the group, the better. The most common and simplest measurement method is to measure the distance between the farthest two bullet holes. This is called the extreme spread method and it’s very easy to do. However, all it really does is tell the distance between the two worst shots. It tells nothing about the consistency of the other shots in the group, and this consistency is really what we want to discover. A better method is to find the center of the group, then find the average distance of the shots to this center. This is a more technical method, but it gives information about each and every shot in the group. I used this second method, called the mean radius (or average to center) and I used groups of ten shots each. Since this method is rather technical and tedious to do by hand, I used a software program called On Target, available for free on the Internet.

The rifle I used was a factory assembled BCM flat-top upper receiver with a 20-inch 5.56 chambered government profile barrel with a 1/7 twist rate using standard handguards. This is as close to a GI rifle as I could find. This upper was mated to a generic lower receiver with a fixed stock and a standard trigger group. For an optic, I chose an SWFA 10x Super Sniper mil-dot mounted in an American Defense Scout mount. The ammunition tested was a variety of target, varmint, and hunting loads, all factory new and commonly available. Since a standard box holds 20 rounds, I used a single box of ammunition for each test- 10 rounds for before and the remaining 10 rounds after the handguard change.

The stock rifle was tested from the bench using front and rear supports and a 10x optic.

For the free-float handguard, I settled on a two-piece unit from Midwest Industries that allows for assembly without removing the barrel nut or barrel, their Gen2 model. I chose this product primarily because it is very easy to install, does not require any serious gunsmithing or tools, and does not require any alteration or adjustment of the barrel. This last part was very important for I did not want to change or alter anything but the handguard itself, leaving the barreled action the same as it was before the change. In this way, any difference in the precision of the rifle after the switch can only be attributed to the change in the handguard.

The rifle after the change to a free-floating handguard.

At the shooting bench, I used a front support placed in the middle of the handguard and a rear bunny-ear bag. I used typical bench rest shooting techniques and fired in a continuous string with about a minute between each shot. Targets were placed at 100 yards and I chose days with the same weather conditions for both tests.

I realize that perhaps the biggest variable in this experiment is my shooting skill, and so I spent several days at the range simply practicing my technique and making sure the gear worked as I expected. Believe it or not, shooting is work, and it took more than a few trials and adjustments to become convinced that I was shooting the rifle as well as could be reasonably expected. But it was enjoyable and it was satisfying to seriously test my shooting ability.

Results for 10-shot groups shot from the bench at 100 yards, average distance to the center in inches. A negative percent change means the groups were reduced in size.

As seen from the data table, most of the ammunition showed a reduction in group size after the handguard change. I was surprised at how great some of the differences were, leading me to the conclusion that the results may depend greatly on the type of ammunition used. But two of the selected ammunition loads unexpectedly grouped larger after the switch. I convinced myself that there must have been some error on my part in the second test and so I went back to the range on a similar day to re-shoot those two underperforming loads, but I got nearly the exact same results. I’m not sure what to make of that. Perhaps I simply had a fantastic day at the range for those two loads the first time out, or perhaps the barrel has specific ammunition preferences of its own.

Most improved: Federal 62 gr Fusion before and after. Note that the extreme spreads (Max) are nearly identical, but the mean radius (ATC) is much smaller for the second group, indicating that the majority of the shots were closer to the center.

Granted, my results are only those of a single test, and may not be typical. But if I were to draw a general conclusion, it would be mixed. Taken as a whole, the average reduction in group size for the various ammunition tested was 23%, which is significant, but not all of the groups were reduced, and the results varied widely. For a rifle suited for defensive or patrol purposes, even the worst group with Federal FMJ ammunition using the original standard handguards was still easily capable of producing a 2-2.5 inch sized 10-shot group at 100 yards, which is more than adequate for hitting man-sized targets out to 500 yards.

A quality basic rifle has the potential to shoot very well. This 10-shot group was produced by the rifle tested in this article after free-floating the barrel and using 52 gr Sierra MatchKing handloads.

Interestingly, I was able to draw a few more conclusions from this test in addition to the question over free-floating the barrel. In my time practicing to check the equipment and refine my skills, I discovered that ammunition quality was more significant than I realized. Several of the inexpensive loads that I intended to test had to be abandoned because they were simply junk, incapable of producing reasonably repeatable groups. These are loads that I regularly use in informal shooting, but they were unsuited for accuracy work. You must use quality ammunition if you wish to realize your rifle’s potential. Another item I overlooked was the trigger. My stock trigger wasn’t bad, but after hours of trying to work past the creep and grit I became frustrated and impatient with trying to break the shot cleanly. I recently purchased an upgraded trigger and I really appreciate what smoothness can do for a precise shot.

A variety of commonly available ammunition was tested, including different bullet weights and styles.

My bottom line advice would be this: For a general-purpose AR-15, either for a patrol rifle or home defense, a free-floating barrel is not an immediate necessity. A quality basic rifle will perform quite well, and the standard handguard design offers more than enough accuracy potential for general duty use. If you are looking for upgrades or improved accuracy results, I would first recommend spending money on high-quality ammunition, a good optic and mount, and perhaps a smooth trigger, in that order. The next investment would be to spend time at the range learning to shoot the rifle up to its potential. Only after success in these areas would I then consider free-floating the barrel.

Editor: Richard wrote an awesome article for thenewrifleman.com! If you are in the market for a Free Float rail, consider Brownells our site sponsor. I recommend the Aero Precision Atlas R-One or for a quad rail, the BCM QRF, both of which I have experience with and both are bombproof! Lothaen Out!

Author teaches high school mathematics and physics as a profession. For leisure he spends his time behind a book or a trigger. Never having been in law enforcement or the military, he writes strictly for the perspective of the armed citizen.

← A Trigger Tune Up for Every Man in Your Platoon:
Rise Armament RA-140 Super Sport Review →
Scroll Up